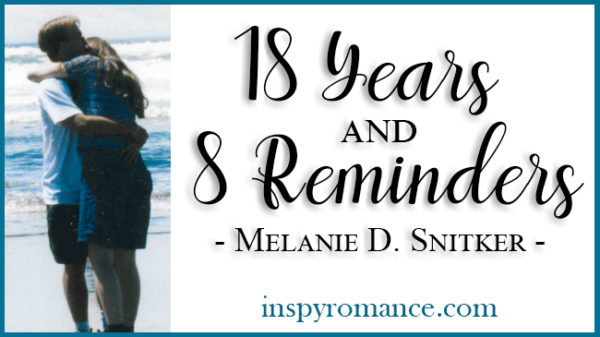 My husband and I celebrated our 18th wedding anniversary this month. I thought I might share the unusual way in which we met, and then decided to do so using eight things that remind me of the journey that brought us together.

Howdy – Doug and I first met online in October of 1997. At the time, my family and I lived in Oregon while Doug and his family lived in Texas. Our moms were e-mail pen pals when they discovered their oldest kids were both in college. Having enjoyed both snail mail and e-mail pen pals most of my life, I was open to e-mailing Doug, but said I would prefer it if he sent the first letter. There was a part of me that didn’t really expect him to. Much to my surprise, within a day or two, I received my first e-mail from Doug, and it started out, “Howdy, Ma’am.” I wrote him back that same day, and we continued to exchange e-mails on a very regular basis.

AOL Instant Messenger – About a year into e-mailing, we started to chat on AOL IM. That was always fun, and sometimes we’d talk way longer than we should, especially considering the papers and other homework we had from our classes at our respective universities. But as time went on, we shared everything about our days. I considered Doug to be my best friend, and looked forward to each e-mail and IM session. 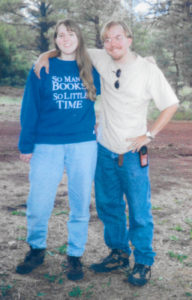 Camping in Williams- In July of 1999, over a year and a half after we exchanged our first e-mails, our families decided to meet. Since we lived in Oregon and Doug lived in Texas, we chose to meet in Williams, Arizona for a camping trip. I’ll never forget the butterflies in my stomach as my family and I drove there, wondering what it was going to be like to actually see and speak to Doug in person. We’d exchanged a few photos, so at least we knew what everyone looked like. But still, this was very different from e-mails or instant messages. I remember our family got to the campground first, and when we saw Doug’s family pulling in, we went to greet them. I had no idea what to expect, but it was as if that year and a half of talking online might as well have been in person. We picked up right where we left off. It was love at first sight for the both of us.

Toy Story 2 – After the camping trip, we began to call each other and talk on the phone several times a week. We went through a LOT of phone cards back then, because that’s what we purchased for our numerous long-distance conversations. After getting to visit in Arizona, it was hard to go back to just e-mail and IMing. That December, Doug made the decision to fly down for a couple of days to visit. That’s when we went on our first official date: We took public transportation to the mall downtown and watched Toy Story 2 in the theater together. Every time our kids watch those movies now, I remember watching it for the first time with Doug there, and it always makes me smile.

Airplanes – That wasn’t the only time an airplane brought us together. In March of 2000, I flew to Texas to see Doug during spring break. It was during that visit that Doug proposed to me while we watched the gorgeous colors of a sunset. I didn’t even hesitate to say “Yes!”

Godsend – Choosing to get married was one of the easiest decisions I’ve ever made. I have no doubt that Doug was the person God made for me. “Godsend” by DC Talk is the song that we played at our wedding, and I think it describes how we feel about each other perfectly. If you haven’t heard the song before, you should definitely give it a listen. 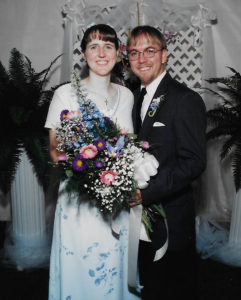 A Simple Wedding – We got married in June of 2000, less than a year after meeting in person for the first time. It was a lovely, simple wedding in my parents’ backyard. We didn’t go anywhere for a honeymoon because Doug had to be at work on Monday, but everything was perfect. After having a long-distance friendship and relationship, just being married and knowing we wouldn’t have to do that again was huge.

Together – Life together has been quite the adventure since then. In the last eighteen years, we’ve moved four times, dealt with infertility for many years, finally welcomed two beautiful children into our lives, and have been navigating the unpredictable waters of parenting a child with autism. We’ve been there to support each other through it all.

Eighteen years later, I can honestly say that my husband is still my best friend. I can’t wait to see what God has in store for us in the future! 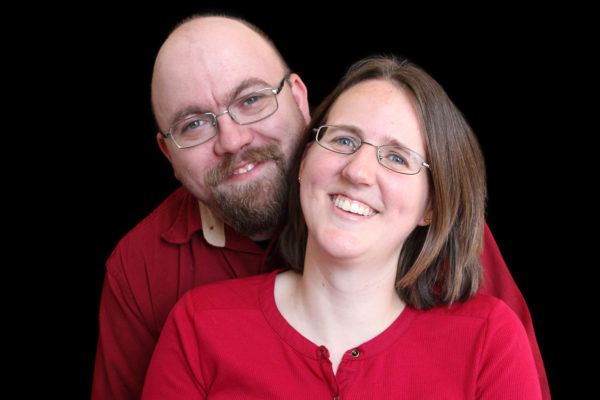