It was 20 years ago that I pulled something I always loved to do out of the mothballs and dusted it off.  At the time, I was a 20-something with a one-year-old and a whole bunch of time on my hands.

You see, prior to that, my life had pretty much been lived in one continuous string of hair-on-fire busyness culminating in three lightning fast years of teaching six subjects a day to around 100+ kids. Then, in January of 1995, I found out I was going to have a little bundle of joy and honoring my promise to my husband, I quit teaching in June to have our baby.

That child showed up super early in July 1995, weighing only 2 pounds. Suffice it to say that between her early birth and us building a house, I didn’t really “wake up” again until 1996. That’s when I found myself now living in our new house with a one-year-old and nothing to do!

Now, I was not used to having nothing to do!  At the time there was no Internet, no texting (no cell phones even—GASP!).  It was long distance to call my mom or my sister just to talk. (If you don’t know what long distance is, you have my permission to go ask your grandmother!) My husband left for work around 6 a.m. and often didn’t come home until 8 or 9 p.m. Worse, there were four, count them FOUR working channels on the television, and during the day, I had the scintillating choice of Letter Lion or Days of Our Lives.

To say I was bored out of my mind would be a VAST understatement. So one day as my daughter and I were killing time walking around Venture, I found a book called, “Awaken the Giant Within.” Now, I’ve always been kind of a motivational junkie. Plus, the book was like 384 pages long, which I figured might keep me busy for at least a couple of days, so I got it.

The one thing that book hammered home again and again was, “You’ve got to figure out what you love to do, and do that!”

Back in high school, I had once written a novel (long hand!  And if you don’t know what that is, go ask your grandmother!).  It wasn’t very good, but I figured I could try that. Better yet, now I had a computer and I could type! (YAY me!)

I started one book, and true to what would eventually become my pattern, I awoke one morning with the idea for another book.  As I asked questions about what I had seen in the dream, the story started coming to me. I got up and wrote out in outline form what I knew of the book. Two days later, I started that book.

However, when you have a character in the water, fighting for her life, it seemed to me the only logical way to write that is to have her PRAY!

And lo and behold, within the next six years, others began to agree with me.  But that’s where it started for me.

So it truly is remarkable to me that “Flight 259,” my very first Christian Romance is being published nearly 20 years after I first wrote THE END.  This book has gone through so many changes over the years, I can’t count them all, and there were many of those years I thought it would probably never find its way to more readers than those first few who read it out of the notebooks I had it printed in at Kinkos.

But here we are 20 years later, and “Flight 259” will be released in the “Whispers of Love” book collection with 11 other Contemporary Christian Romances. Somehow that’s fitting for this book for it proves what I knew even back then… Christian love isn’t a thing of the past at all.  It’s right here and right now real.

It just took 20 years for other people to realize it.  Then again, to be really honest, to me, 20 years is not nearly as long as it sometimes seems! 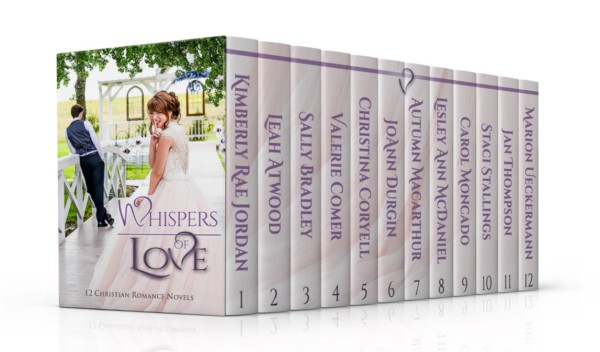