Christmas is over for another year. Sad day. I don’t know about you, but once Christmas is over, it’s like I finally give myself permission to think about 2015. I’ve been keeping my eye open for the top inspirational romance novels I’m looking forward to in 2015. It’s so hard to choose, but here are my top five. 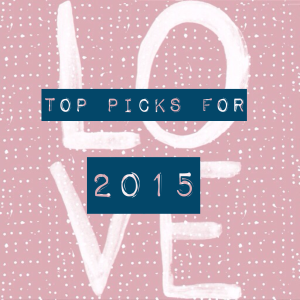 London Tides by Carla Laureano: The anticipated sequel to the RITA-award-winning Five Days in Skye. This is my #1 pick.

Irish photojournalist Grace Brennan travels the world’s war zones documenting the helpless and forgotten. After the death of her friend and mentor in the field, Grace is shaken.

She returns to London hoping to rekindle the spark with the only man she ever loved—Scottish businessman Ian MacDonald. But he gave up his championship rowing career and dreams of Olympic gold years ago for Grace … only for her to choose career over him. Will life’s tides bring them back together … or tear them apart for good this time?

Paper Hearts by Courtney Walsh: Not even going to pretend I didn’t judge this book by its cover. SO cute!

Abigail Pressman would never have guessed that love notes penned on paper hearts by an anonymous couple could restore her belief in love. As a business owner in a quaint town at the base of the Rockies, she’s poured everything into dreams of expansion . . . and resisting the matchmaking efforts of the Valentine Volunteers, who gather in her store to continue Loves Park’s tradition of stamping mail with the city’s romantic postmark.

When Abigail is unwillingly drafted into the Volunteers, she encounters the paper hearts, a distraction that couldn’t come at a worse time. A hard-to-read doctor has become Abigail’s new landlord, and he’s threatening to end her lease to expand his practice.

As she fights a growing attraction to this handsome man crushing her dreams, Abigail is inspired to string the hearts in her store, sparking a citywide infatuation with the artsy trend. But when a new batch of hearts reaches the Volunteers, it appears something tragic has happened to the couple. Will uncovering their story confirm Abigail’s doubts about love, or could it rescue her dreams . . . and her heart?

A Love Like Ours by Becky Wade: Jake is the Porter sibling I have *most* been looking forward to reading about :)

Deeply scarred from a day he wishes he could forget during his military service, Thoroughbred trainer Jake Porter has given up on love. He struggles against symptoms of PTSD, lives a solitary life, and avoids relationships.

When Lyndie James, Jake’s childhood best friend, returns to their hometown of
Holley, Texas, Jake cautiously hires her to exercise his Thoroughbreds. Lyndie is tender-hearted, fiercely determined, and afraid of nothing, just like she was as a child. Jake trusts her with his prized racehorse, Silver Leaf, then battles his hopes for his horse against his increasing fear for Lyndie’s safety.

Though Jake and Lyndie have grown into very different adults, the bond that existed during their childhood still ties them together. Against Jake’s will, Lyndie’s sparkling, optimistic personality begins to tear down the walls he’s built around his heart. A glimmer of the hope he’d thought he’d lost returns. Will Jake ever be able to love Lyndie like she deserves, or is his heart too shattered to mend?

The Art of Losing Yourself by Katie Ganshert: I love this author’s writing style so much. From the description, I can’t wait to get my hands on it!!

Every morning, Carmen Hart pastes on her made-for-TV smile and broadcasts the weather. She’s the Florida panhandle’s favorite meteorologist, married to everyone’s favorite high school football coach. They’re the perfect-looking couple, live in a nice house, and attend church on Sundays. From the outside, she’s a woman who has it all together.  But on the inside, Carmen Hart struggles with doubt. She wonders if she made a mistake when she married her husband. She wonders if God is as powerful as she once believed. Sometimes she wonders if He exists at all. After years of secret losses and empty arms, she’s not so sure anymore.

Until Carmen’s sister—seventeen year old runaway, Gracie Fisher—steps in and changes everything. Gracie is caught squatting at a boarded-up motel that belongs to Carmen’s aunt, and their mother is off on another one of her benders, which means Carmen has no other option but to take Gracie in. Is it possible for God to use a broken teenager and an abandoned motel to bring a woman’s faith and marriage back to life? Can two half-sisters make each other whole?

In Firefly Valley by Amanda Cabot: This is a new-to-me author, but when I saw this book on Relz Reviews, it definitely garnered my interest!

Marisa St. George is devastated when she is a victim of downsizing and has no choice but to return to the small Texas town where she grew up. Though it’s a giant step backward, she accepts a position as business manager at the struggling Rainbow’s End resort. The only silver lining is Blake Kendall, a new guest who is making her believe in love at first sight.

But will her dreams of happily-ever-after be turned upside down when she discovers who he really is?

I have this strange feeling that I’m forgetting something important, and there were several that I debated putting on the list and ended up switching. This was way harder than I thought. Maybe I should have done a top 10 :)

What books are you most looking forward to in 2015?