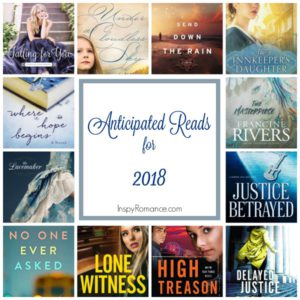 One of the things I love most about ushering in a new year, is seeing all the new stories out there waiting to be read. Below are twelve of my most anticipated fiction reads for 2018.

Are any of these books on your must-read list?
What other books are you looking forward to reading?

FALLING FOR YOU
A Bradford Sisters Romance #2
by Becky Wade

Willow Bradford is content taking a break from modeling to run her family’s inn until she comes face-to-face with NFL quarterback Corbin Stewart, the man who broke her heart–and wants to win her back. When a decades-old missing-persons case brings them together, they’re forced to decide whether they can risk falling for one another all over again.

UNDER A CLOUDLESS SKY
by Chris Fabry

A novel set between 1933 and 2004 about the coal-mining town of Beulah Mountain, West Virginia, and the people who live there in danger of being destroyed by a horrific massacre of miners during a conflict between the workers and management for the sake of profit. Years later, many neighbors are forced sell their land to a coal and energy company or face rising property taxes. One man tries to keep his family legacy while a mining executive offers to revitalize the dying town paying homage to the past while positioning the company for growth at all costs.

SEND DOWN THE RAIN
by Charles Martin

When Allie’s second husband dies in a fiery truck crash, it threatens to push her over the edge. Nearby, Vietnam veteran Joseph lives in an isolated woodland cabin. While helping a family lost in the forest, he witnesses the explosion—and somehow knows his childhood sweetheart needs him. Could their love wash away the past?

THE INNKEEPER’S DAUGHTER
by Michelle Griep

After tragedy strikes her family in 1808 England, Johanna runs the Blue Hedge Inn alone. As her bills mount, she despairs—until undercover agent Alexander arrives. He’s been assigned to expose a French spy who’s plotting against the king. Thrust into a game of betrayals and villains, will he and Johanna discover more than conspiracies?

WHERE HOPE BEGINS
by Catherine West

In the aftermath of her husband’s act of adultery and abandonment, Savannah must finally face the ghosts that haunt her and discover for herself whether authentic faith, grace, and ultimate healing really do exist.

When her husband of twenty-one years leaves her, Savannah Barrington believes she’s lost almost everything she’s ever loved. With her daughter in college and her son in boarding school, Savannah retreats to her parents’ lake house in the Berkshires, where hope and healing come in the form of an old woman’s wisdom, a little girl’s laughter, a touch of magic, and a handsome man who’s willing to risk his own heart to prove she’s still worth loving.

But when her husband asks to reconcile, Savannah is faced with the hardest challenge of all: Forgiving the unforgivable. Somehow she must find freedom from the chains of their past and move forward, or face an unknown future without him.

THE MASTERPIECE
by Francine Rivers

Roman Velasco is a successful commercial and graffiti artist with a mansion overlooking the Topanga Canyons of Los Angeles, California. On the outside, he appears to have everything he could possible want including money, women and fame, yet everyday demons from his past haunt him.

Grace Moore is a single mom who was in a marriage that crushed her dreams. She is Roman’s newly hired personal assistant, wrestling with ghosts and secrets of her own. She will never lose sight of her dreams again.

When the unexpected happens, it changes their lives & relationship forever.

THE LACEMAKER
by Laura Frantz

Set in 1775 Williamsburg, Virginia, Lady Liberty Lawson is a twenty-three-year-old lace maker and daughter of the British lieutenant governor of the Virginia Colony. Her life is in order. She is a part of the finer society and anticipating a marriage of financial stability and not love.  When her fiancé leaves her suspecting she is a British spy, she struggles to choose between her father’s British political beliefs and the colony’s independence.

It’s Elvis Week in Memphis, and homicide Detective Rachel Sloan isn’t sure her day could get any stranger when aging Elvis impersonator Vic Vegas asks to see her. But when he produces a photo of her murdered mother with four Elvis impersonators–one of whom had also been murdered soon after the photo was taken–she’s forced to reevaluate. Is there some connection between the two unsolved cases? And could the recent break-in at Vic’s home be tied to his obsession with finding his friend’s killer?

When yet another person in the photo is murdered, Rachel suddenly has her hands full investigating three cases. Lieutenant Boone Callahan offers his help, but their checkered romantic past threatens to get in the way. Can they solve the cases before the murderer makes Rachel victim number four?

NO ONE EVER ASKED
by Katie Ganshert

When an impoverished school district loses its accreditation, the affluent community of Crystal Ridge is forced to open their doors. In the aftermath, the lives of three women converge—wealthy Camille Gray, nurse Jen Covington, and first-time elementary school teacher Anaya Jones. As tensions rise within and without, how will they navigate unforeseen challenges?

When prosecutor Sophie Dawson is the lone witness to a gang-related double homicide, her world is turned upside down. Private security guard Cooper Knight is hired to protect Sophie from the gang, but she’s more concerned about prosecuting her latest case than the threat to her life. Sophie wants to stand for what’s right, but can Cooper keep her safe?

When Saudi Prince Omar bin Talal visits Houston to seek cancer treatment for his mother, an attempt on his life puts all agencies on high alert. FBI Special Agent Kord Davidson is the lead on the prince’s protective detail because of their long-standing friendship, but he’s surprised—and none too happy—when the CIA brings one of their operatives, Monica Alden, in on the task force after the assassination attempt.

Kord and Monica must quickly put aside interagency squabbles, however, when they learn the prince has additional motives for his visit—plans to promote stronger ties with the US and encourage economic growth and westernization in his own country. Plans that could easily incite a number of suspects both in the US and in countries hostile to Saudi Arabia. Worse yet, the would-be assassin always seems to be one step ahead of them, implicating someone close to the prince—or the investigation. But who would be willing to commit high treason, and can Kord and Monica stop them in time?

Jaime Nichols went to law school determined to find the voice she never had as a child and then use it to protect the innocent. Though she currently works as a criminal defense attorney, she believes she’ll best protect the innocent by first understanding how the other side works. But just as a figure from her past is rising to prominence, she is removed from all her cases . . . and can’t help but feel that she’s lost her voice once again.

Chandler Bolton is retired military and now works with returning troops to help ease the transition back to civilian life. He and his dog also work with children who need a safe place, but he’s convinced the brash and edgy Jaime is not the voice they need.

Jaime knows that another child is being threatened just like she was. With Chandler’s help, can she protect her . . . and find the justice she was denied all those years ago?

Brenda S. Anderson writes gritty and authentic, life-affirming fiction. She is a member of the American Christian Fiction Writers (ACFW), and is Past-President of the ACFW Minnesota chapter, MN-NICE, the 2016 Chapter of the Year. When not reading or writing, she enjoys music, theater, roller coasters, and baseball, and she loves watching movies with her family. She lives in the Minneapolis, Minnesota area with her husband of 30 years, their three children, and one sassy cat. Readers can learn more about Brenda S. Anderson at www.brendaandersonbooks.com