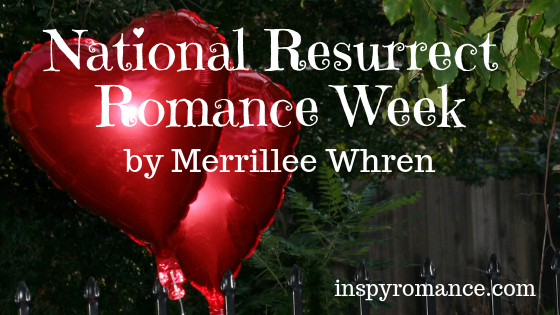 Did you know the second week in August is National Resurrect Romance Week? I like to look for quirky holidays to blog about. When I found this one, I knew it was perfect for a blog that features romance books.

Why the second week in August? The answer: It is six months after Valentine’s Day. Many believe that Valentine’s Day is too commercialized and that love is more than candy, flowers, and cards. So in 1995 Michael Webb, who is considered a romance expert, created this holiday week for celebrating romance. The motto for the holiday is: “Real romance comes from the heart, not the wallet.”

But I’m sure as romance readers and writers we can come up with our own list of romantic things to do and share with the special one we love. Leave your suggestions in the comments, and I will give away a copy of the first book in my Kellersburg series, HOMETOWN PROMISE, to one person who leaves a comment.

Here is an excerpt from the book of a romantic moment that turns not so romantic.

Joy captured Juliane’s heart as she sat in Lukas’s car. The banquet had been everything she’d imagined. She couldn’t remember when she’d had a better time. Lukas gripped the steering wheel, his attention on Ferd, who climbed the steps and unlocked his door. Turning, he waved before going inside.

“I wish he didn’t want so much independence. I always worry that he’ll fall, but he insists he doesn’t need any help.” Sighing, Lukas put the car in gear and pulled into the street.

“He and Dot were so cute tonight.”

“I think he kissed her good night when he walked her to the door.” Lukas chuckled. “I couldn’t tell for sure in the dark.”

“Keeping tabs on your grandfather?”

While they rode in silence, Juliane wondered who was going to keep tabs on her heart. Lukas was winning it over day by day and little by little. She still wasn’t sure that was wise. But one thing she knew for sure—she hoped Lukas followed his grandfather’s example when saying good night.

She was ready for Lukas’s kiss.

Not a drunken kiss, but a kiss that he gave her because he knew her and knew where he was. A kiss given with tenderness and caring. She’d been thinking about it ever since he’d asked her to the banquet. She wanted to experience his kiss, but thinking about it was tying her insides into knots. She should put her mind on something else.

“When did you and Elise cook up that bit with the Sonny and Cher costumes? That wasn’t in the original plan.”

“During those last-minute practices for the Winter Festival. Elise had done a number like that during a cruise show and thought it would be fun.”

“Everyone loved it. You guys did great tonight. I wish I could’ve heard you at the Winter Festival, too.”

“I wish I could’ve sung with you.” He pulled into her drive and shut off his car.

“We’ll have another chance.”

“I hope so.” He reached into the backseat and brought out a small bag decorated with red hearts. “I got you a little gift. Happy Valentine’s Day.”

Juliane’s heart fluttered. “But I didn’t get you anything.”

“I didn’t expect anything. Your going to the banquet with me was a gift.”

The intensity in his gaze took her breath away.

She took the bag and opened it. A little wooden house sat nestled in the tissue paper. She lifted it out.

“It’s adorable. I love it.” Looking up, she saw relief in his eyes. “Thank you.”

“I have to give Grandpa credit. He suggested it.” Lukas pointed to the thermometer. “The temperature indicates that I should get you out of this cold car.”

“Good idea.” Juliane laughed and put the weather house back in the bag and slipped her arm through the handles.

Walking to her front porch in the cold night air, she snuggled against him as he draped an arm around her shoulders.

They skirted an icy patch in front of the steps. “You should get some deicer for that spot. I wouldn’t want you to fall and break something.”

“You’re right.” She was falling all right—falling for this wonderful man. She hoped it wouldn’t mean a broken heart. When they stepped onto the porch, she turned to face him. Her heart hammered as he smiled. “I had a great time tonight.”

Her pulse raced with anticipation as she raised her head to look into his eyes. She couldn’t miss the caring in them. Every nerve hummed. He gently pulled her into his arms.

He lowered his mouth to hers. But at the last second, as she was about to close her eyes, that old incident raced through her mind in a blinding flash, leaving her shaken. Alarm took over, and she turned away.

A huge lump formed in her throat. All evening she’d waited for this moment, anticipated this kiss. Why had she panicked? She wished the porch would open up and swallow her.

He stepped back, a troubled expression clouding his features as his forehead creased in a frown. He didn’t say anything, just stared at her.

Embarrassed, she quickly turned to the door and fumbled to fit her key into the lock, the gift bag dangling from her arm. “Thanks again. I had a lovely time.”

“Did I do something wrong?”

She hunched her shoulders, afraid to turn and face him. Misery marched in and swept away all the good feelings of the evening. She thought she’d forgiven him, thought she’d put the past behind them. Why had she let that bad memory ruin everything? How was she going to explain?