Once upon a time, my husband listened to a romance audiobook with me. I downloaded Meant to Be Mine by Becky Wade for a road trip, and he got sucked in. It was the cutest thing ever. He said stuff like…

When Ty rode his Harley to the bakery where Celia works, Jim said, ” Let’s go ride our Harley to a bakery for breakfast.” So we did. 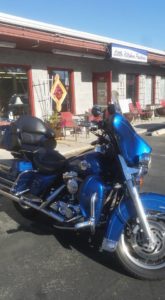 And while at the bakery, he asked, “What was the name of the bakery in the book, again?” I said, “Cream and Sugar.” In response, he pointed to this sign: 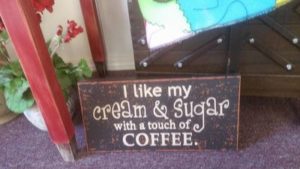 As an avid reader of romance, I knew what to expect from the “hidden baby” trope in the story, but this was all new to Jim. So it was fun to see it through his eyes. I’m glad he got a glimpse into my world and the kind of worlds I work to create.

But I think all men could learn something about women from reading romance. For starters: 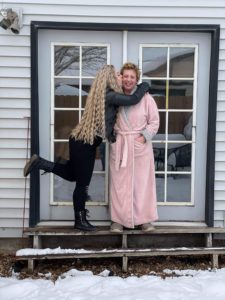 I told Jim I was writing this article and asked if he had anything he would like to add. Now that he’s listened to Becky Wade’s novel and helped me plot many of mine, what had he learned about women?

I laughed. Because he’s not wrong. Per the movie director’s request, I just had to add a Christmas caroling scene to my novel optioned for film. So we’ll make that an honorary number six. But only because Jim has already mastered the first five.

What else do you think men could learn from reading romance? (I especially want to hear from you guys!!!)