Coming Undone was a “lightning strike.” Some books are a slow slog through molasses; others seem to have a speed of their own–instantaneous.  Coming Undone was one of those.  I can tell you that the two actors who showed up at my doorstep demanding to be put in a book were Patrick Dempsey and Kathryn Heigl–and oddly enough that was before they were paired on Grey’s Anatomy.  I must have a sixth sense or something!

However, the thing I remember most about this particular book was that the end had me twisted into knots.  We were doing great until Kathryn walked away from Ben in that graveyard, and then… Well, I wasn’t at all sure what happened next.  I mean, once the reason for being thrown together is over, what next?

Worse, they both seemed determined to go on with their lives (I hate it when characters have a mind of their own!  Didn’t someone clue them in that I’M the author, so they are supposed to do what I say?).  So, here they are, both going on with their lives denying what was so patently obvious to everyone else, and I was struggling. 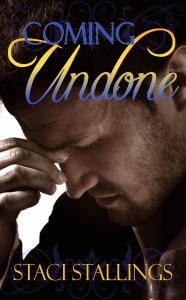 Even worse than that, Ben decided to go back to his old ways–you know, drinking and the fast life he had been so enamored with in the first place.  There are times as an author/counselor to these people, I just want to take them and shake them!  “Hello!  Life changing experiences just happened to you.  What are you thinking trying to go back to who you were?”  It really is funny how often and strenuously I have to have these conversations with these people I was supposed to be controlling.

In the middle of all of this, I was serving on a church team of women, and I really was struggling to make all the pieces of this thing fit.  That’s funny now, but at the time, I really didn’t see how I could get it all tied up in a neat little bow that made sense and left the reader with peace about the story.  And neither of my characters was cooperating.

During the team formation, one of the things we had to do was get a prayer partner each week.  Then you tell your partner one thing you would like them to pray for.  That week I got this sweet little old lady with flaming red hair.  She was as fun as her hair suggests.  All I could think of to ask for was help with the ending of this book.  I told her about how I was having so much trouble with it and how I’d really like to get it finished so I could move on to something else.

Honestly, she probably thought I was weird, but I’m pretty used to people thinking that by now.  So I headed into the week, figuring by the end of it I’d be no closer to finished than I was when I started.  Then, lo and behold, from out of nowhere the end hit me.  I started writing, and literally in one day it was finished–like 45 pages!  And it was perfect!

So I emailed my prayer partner to thank her.  When she emailed back, she said, “Oh, I didn’t do anything. I just said a few prayers.”  That still kind of makes me sad when I think about it.  How often do we shush up our prayer life, put it in a box, and think it can’t really make much of a difference?  Not being the shy-type about such things, I took her aside at the next meeting, gave her a big hug, and thanked her again–profusely for her prayers.

I told that her prayers were what helped me finish that book and to never again question if they made a real difference.  So never underestimate the power of your prayer or people praying you through tight scenes and frustrating sequences.  It sure came through for me in a big way on Coming Undone!

“I felt all of Ben emotions when he was dealing with the tragic situation that was going on in his life and how Kathryn always seem to know the right thing to say to comfort him, but of course that was due to her relationship with the Lord. I thought it was beautiful how Kathryn would pray for spouse even when she did not know who he was. Prayer is so amazing.”

The #1 Christian Romance on Amazon!