First, I was a student back in the day, and back then, I got a variety of grades. Most of my grades were in the A-range—90 and above.  Not all. Just most.

While my grades were 90 and above, I was still often disappointed when they weren’t a 100%. And if I didn’t get a 100, I knew two things—one, I should have worked or studied harder, and two, the 90 or above grade would average out high enough that I would be okay.  It worked. I eventually graduated at the top of my class.

Fast-forward a few years and I became a teacher. For many of my students, they were not interested in getting grades at the 90-or-above level.  They were simply interested in passing (70%) or passing high enough to play sports (75%). This drove me a little nuts because, honestly, I knew most of them were capable of much higher levels of work, but they were simply not willing to put in the effort.

However, their mindset wasn’t something I could fix, and although it did make me feel less-than-100%, without an actual grade to go by, I didn’t have a scale-measure of just how far from 100% I was or how to increase my “grade” to a higher level.  Oh, I tried, but I don’t know how successful I was.

The other day, now being an author, I realized something about myself and particularly my writing.  While I strive for that 100%, it is nearly impossible to reach.  And a “grade” in the 90’s doesn’t feel like an A.  If it’s not 100%, it feels like the readers think I’m not even trying.

Think about it.  Out here in the writing world, to get a 100%, I have to write a 400+ page book with no errors or even perceived errors (you see, not all readers are English majors, and some have actually been *gasp* taught wrong themselves!).  Some of those readers who are “grading” my work are those 70% students I had in high school.

That’s not to say there’s anything wrong with that.  In fact, I’m quite glad they are reading. But one of the most frustrating things is writing with no good way to have a conversation afterward. Because some of them decide to write reviews, and some of them decide to mark a book down, sometimes way down, and they write things like, “This book was filled with erors.”  (sic)  They get the names of characters wrong. They complain there were “so many” errors, but at times you are left with the impression that the errors they “found” weren’t errors at all.

This is not to say my books are 100% right.  A long time ago, God (thankfully!) freed me from my obsessive need to always be 100% right (i.e. perfectionism syndrome).  He very graciously explained to me that my worth with Him is not predicated upon how perfect I am.  It is merely a reflection of how perfect He is.

However, I’m not going to say these reviews never hurt. Unfortunately, I cannot go back to the reviewer as I could a teacher and ask why.  I cannot go back and explain or even ask for clarification so I can “fix it” next time. Worse, very often what one reviewer will mark me down for is in direct contradiction to what another praises.

All I get is the feedback that the book wasn’t perfect, and everyone moves on.

I will tell you that even an author whose aim is 98% accuracy, it’s not always easy to deal with not being completely perfect.

Interestingly, I am coming to learn in the last week or so how well my characters reflect this very dynamic.  Not all of them are still in school. Many are years removed from it.  Not all were stellar students, but all are dealing with a world that “grades” them and always finds them lacking.

For example, Sage Wentworth in “Mirror Mirror” is the golden girl who is the envy of all the girls in a small town. So envied, in fact, that the others see no harm in tearing her down. Why? Because she’s perfect, and they can’t stand how “close to perfection” she is.

Of course, Sage isn’t perfect although she’s desperately trying to be. Worse, the barbs and criticisms go far, far deeper than anyone knows. Oh, she’s learned to smile through them and put on a good face, but behind closed doors, it is a very different story.

And now, at the end of August, “When I’m Weak” will debut, featuring Sage’s sister, Jaycee who has grown up now but is still fighting those same demons.  Funny how when I think about this book now about to go out in the world, I get a little trepidation in my chest.  Readers liked Sage so much, will they like Jaycee?  Will they even give her a chance? Will they like that we leap forward in time?  Will they judge her as harshly as she is judging herself?  Will they be upset that the story isn’t quite as long as the first one or that…? Okay, you can fill in the blank.

Maybe I’m a weird author, but every time I put out a new book, I get that same “have to breathe it down” trepidation. This isn’t about some math formulas that I don’t really care about. It’s not about some names and dates of long ago happenings.  For me, this is right here and right now. Important on an eternal scale of hoping readers get what I’m trying to say, and important on a 98% right isn’t perfection scale.

Letting go of the second doesn’t always make dealing with it easier. It is a step-for-step process—remembering to keep my eyes on Him and not on the “erors.”

How about you, in your life?  Does getting life 98% right bother you too? I know it does Sage and Jaycee, and I feel like they can’t be the only ones.  I guess in that way, they are a reflection of the author whose name is on the cover of their stories.  I don’t know that to always be the case, but I suspect it is more times than not.

So, dear readers, I do hope you like my stories. Just know, they came from someone who wanted a 100% but probably didn’t get there.  That’s the “other side of the conversation” you probably don’t hear very often and the one I’ve been wanting to say for a while now.  Now, maybe that I’ve said it, I can move on and just write.  That would be nice.

When I’m Weak – Buy from Amazon 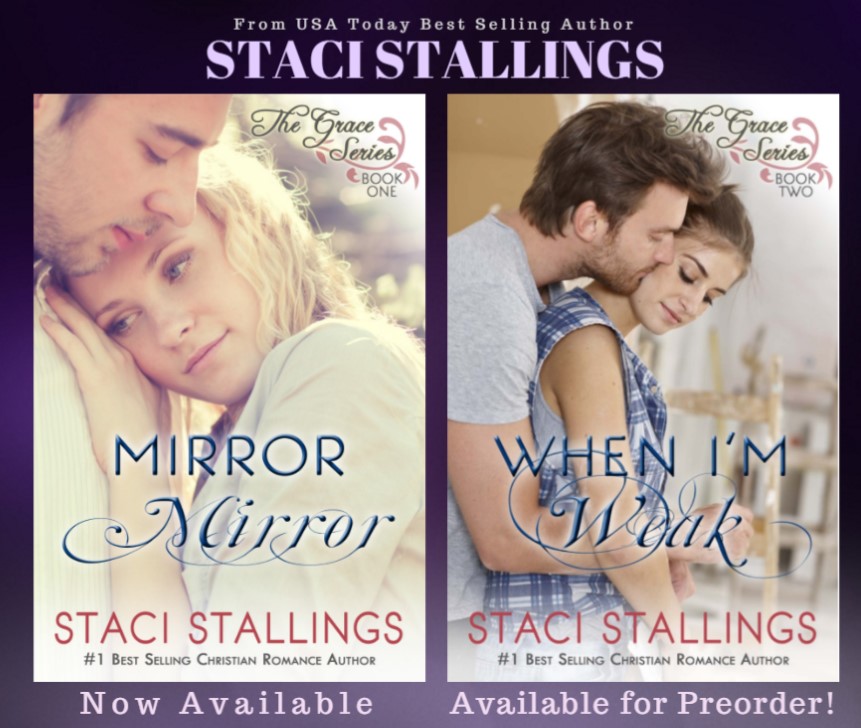