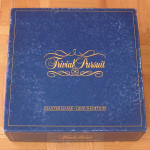 Example: Did you know that dogs don’t hesitate to go out in the rain because it’s wet, but because the rain amplifies their hearing and it’s uncomfortable for them? Now didn’t that just make your day?

How about this one. Did you know that the popular phrase- “Badges! We don’t need no stinking badges.”- comes from a 1930s Bogart film?

I was around twelve years old when I realized I was storing these odd facts away in the back of my mind. At the time, all it did was confirm that I was different from most of my friends. I can remember blurting out information about our current celebrity crushes. Things like- Did you know he wanted to be a minister before he started singing?  Or – His wife is five years older than he is. I can still recall the puzzled looks on my friend’s faces clearly questioning my sanity.

It was a few years later that I realized I was also collecting information about people. I would notice how my friends interacted with their parents, and compare it to my own. I’d ponder over situations where each of my friends reacted differently to a similar situation. Some would joke, some would cry others behaved as if they were unaffected. I wanted to understand why, what made them react so differently? (I think I’m a frustrated psychologist at heart.)

For the first thirty years of my I accepted my odd collecting habit as a quirk. Though I wondered why I was prone to such behavior. At one point I realized all that information came in handy when my husband and I would play Trivial Pursuit. With his knowledge of sports and science, and mine for entertainment and literature, we were unbeatable. After a while, it became difficult to find people to play with us.

And then I started to write. In the beginning I wrote short fan fiction stories. This was before the days of the internet so I’d mail them to friends and sometimes receive encouraging responses. As I continued to write, the stories grew until I eventually attempted a whole book. It was after I sold my first Silhouette Special Edition to Harlequin that I began to see a purpose for all those accumulated factoids and observations.

After a dozen books, two novellas and countless unfinished manuscripts I delight in all the bits and pieces I’ve amassed. All those years of observing people’s behavior had provided me with a deep well of character traits and inspiration for my books. I’ve been blessed to live overseas and in several different States. Now I have countless scenes from the places I’ve been to add to the stories, and many of the odd facts have given birth to plot ideas or plot twists.

The book I’m finishing now is based on the romance of my oldest son and his wife. An earlier book idea was the result of one line in a song that I tucked away many years ago. My November Love Inspired release came about from a tiny article in the news.

I now know that all writers store up pieces of information, observations and impressions for use in their stories. Whew. What a relief. I’m not weird, I’m just a writer.

It’s amazing how the Lord prepares us for our task even when we don’t see it. What I once saw as a quirk has become the foundation for my writing career. I don’t intend to stop collecting any times soon.

Have you discovered that the Lord was preparing you for events or tasks long before you realized it? I’d love to hear your stories.