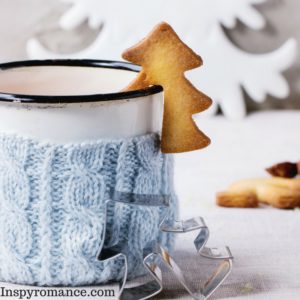 In my pre-published life I belonged to a few influencer groups for different authors. Since being published I’ve whittled that down to only one author–Susan Sleeman. She writes contemporary romantic suspense. It’s suspenseful, but not so much so that I can’t read it at night. :)

Her most recent book is the final installment in her First Responders series. A Christmas Conspiracy did not disappoint and, even if you haven’t read any of the other books you’d enjoy this since it easily stands alone.

Here’s the back cover copy. 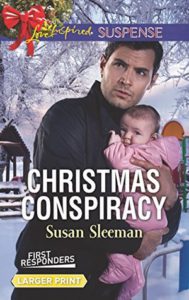 It’s a typical day at Rachael Long’s day-care center—until a masked gunman tries to abduct one of the children in her charge. First response commander Jake Marsh manages to diffuse the situation before anyone is harmed…but not before Rachael unmasks the would-be kidnapper. Now Jake must lead a manhunt and protect Rachael from the criminal who’s turned his focus on her. But the case is reawakening painful memories for Jake, and Rachael’s treating emotional wounds of her own. And with danger mounting as Christmas nears, they must learn to let go of the past in order to outwit a killer…and find the peace that’s always eluded them both.

Here is a short excerpt from chapter one.

Hot, ugly eyes stared at Rachael from black circles in the gunman’s mask. If he planned to kill her, he needed to do it quickly or she would fight him to the last breath. She’d rather die than see him hurt a child under her care.

She straightened her shoulders and checked on Kelly asleep in her crib at Rachael’s child development center. Oblivious to the threat, the precious three-month-old pushed her fist under her chin, and soft breaths pursed her lips. She was helpless and depended on Rachael for protection.

The gunman took another step.

Rachael backed up and draped all five-foot-five inches of her body across the front of Kelly’s crib. “You’ll have to go through me to get to her. I might be small, but I’ll put up a fight.”

“Don’t be a fool.” He jerked his gun toward the wall with brightly painted cubbies holding the belongings of the six infants cared for in this room. “Step away from the baby. I don’t want to hurt you, but I will if I have to.”

Rachael didn’t comply, but memorized his voice—the inflection, the slight rasp. If he got away and left her alive, she could help identity him. But first, she needed to make sure she and Kelly lived.

Rachael tightened her hands on the crib rail, connecting with the solid maple and holding on for dear life. “I’m not moving.”

His eyes narrowed. “Then we do this the hard way.”

“Or you could not do this at all,” she suggested, but he ignored her and took long steps across the room.

Dressed in black, he stood six feet tall and had an athletic build. He wore latex gloves and brandished the gun like he’d held one before. He stepped off and she waited, her eyes fixed on his weapon, expecting it to discharge.

Step by step, he moved across the brightly colored area rug with teddy bears and bunnies that she’d chosen when she’d opened the center three years ago. Never in her wildest dreams had she expected a masked man, intent on kidnapping a precious little baby, would cross this rug.

“Please, don’t do this,” Rachael begged.

He ignored her and kept coming, crossing the room. Thump. Thump. Thump. His hiking boots pounded on the gleaming linoleum, the gun still outstretched in his hands.

Her confidence wavered, and her palms grew moist, the solid rail becoming slick under her hands. Panic stole her breath, and she fought to draw in another one.

The gunman slowed, then stopped in front of her, and fixed those burning eyes on hers while pressing the barrel of his gun to her forehead. “Are you ready to cooperate now?”

Fear coursed through her chest, and her hands trembled, but she held her position. Another child’s life wouldn’t end on her watch. The guilt of losing another innocent baby would tear her apart.

She gave a small shake of her head, feeling the gun barrel cold against her skin.

“Fine.” He clamped his free hand on her forearm and spun her swiftly, then snaked his arm around her chest, pinning her arms at her sides and clutching her tight against his body.

The gun no longer at her head, Rachael arched her back and bucked.

His arm held like a vise, tightening, crushing down and bruising her flesh.

She cried out in pain and instantly hated that she’d let him know he’d hurt her.

“You wanted it this way.” He laid his gun on the mattress near Kelly’s sleeper-covered feet before using that hand to dig through his jacket pocket.

The sight of his gun lying so close to Kelly hit Rachael like a physical punch to her gut.

As the center’s owner and director, she held the responsibility for Kelly while her mother, Pam, worked. Rachael had wanted to help Pam out today when she’d had to go to work early or risk losing her job, so Rachael had taken Kelly before the center opened. She’d thought it would be fine, but then the first teacher of the day got a flat tire, leaving Rachael alone. And now she’d failed Pam. Failed Kelly.

Rachael had to find a way to save the sweet baby.

But what could she do? She’d already tried everything she could think of. This man wanted Kelly, and he didn’t care what he had to do to get her.

She waited for a bit of calm, maybe peace, but none came. Nothing odd about that. She hadn’t felt true peace since she’d lost her husband and unborn child just over four years ago. Tears rolled down her cheeks and dropped to the crib, landing on the pastel teddy bears covering the mattress.

Kelly shifted, drawing her pudgy little legs up tighter under her body.

Her captor tightened his grip while continuing to fumble around behind her. She slowly leaned toward the crib and slid her fingers closer to the gun. Inch by inch she moved. Closer. Closer.

I hope you enjoyed this peek inside Christmas Conspiracy. I’m reading as many Christmas books as I can. Are you in the process of reading a Christmas book? If so, which one are you currently reading or is there one in particular you consider a must-read?