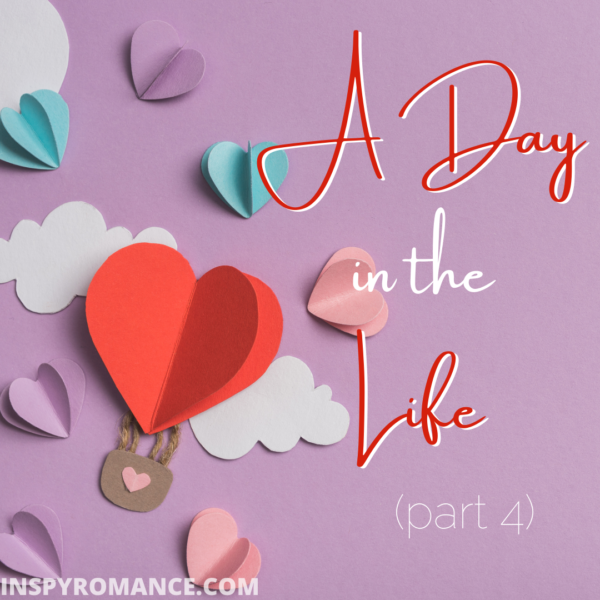 Hey Everyone! I hope your December is getting off to a great start!

Today, I’m continuing my “A Day in the Life” story. If you haven’t read the previous sections, you can click here for Part 1, Part 2, and Part 3.

In the meantime, I hope you have a marvelous day!

If I’d expected Jacob Maximillian Short to spring for a super fancy, expensive lunch, I would have been dead wrong.

That would have been okay, except that the kids had swallowed down two bites then run off to play, and now their uncle was staring at me like he was trying to discover the hidden secrets of my soul.

Trust me, nobody wanted to go that deep. Most days, I’m convinced that under our skin-smooth surface, most people are rotting corpses. I didn’t always think that, but these months of unemployment have worn on me. My normal sunshine-and-roses outlook turned into a silver-linings-are-for-suckers attitude. Which contributed to the development of a massive guilt complex.

I was supposed to be trusting God. Because that’s what Christians do. I was trusting God. I knew He was in control. I just… I don’t know. Everything seemed to come with a side of sour most days anymore, and it was wearing on me.

“Blah, blah, blah, blah.” His tone was more forceful, but I still couldn’t hear him over all the racket. The impatient look on his face, though, made me want to call him Maxie again. Maybe I would start calling him that all the time…in my head. I was crazy, after all.

My stare must have been adequately blank because he leaned in closer and nearly shouted. “Why are you between jobs?” 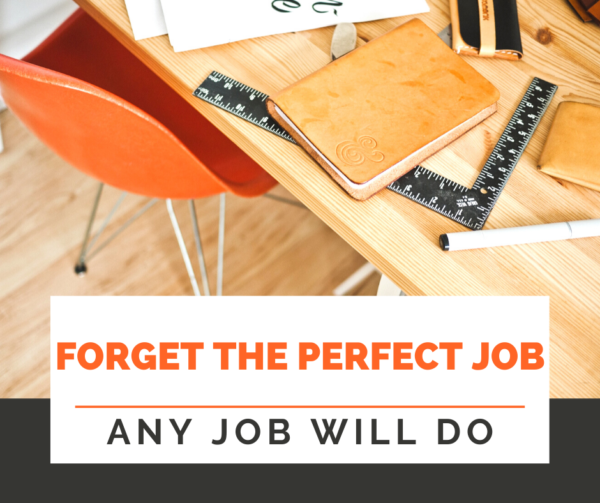 I mostly resisted the urge to roll my eyes. “The pet store owner hired his granddaughter’s boyfriend. Every restaurant I’ve applied to has decided to go with someone more experienced. Apparently, having waited tables in college twenty years ago is adequate experience, but being a quick learner and hard worker doesn’t count for anything. Retail shops seem to think I’m overqualified and that I’ll jump ship as soon as something better comes along. So they hire college students who blow off their shifts half the time and – shocker – jump ship as soon as something better comes along. The dental office wanted someone with a working knowledge of medical terms even though it was just a receptionist position. The call center didn’t like my accent.”

His brow wrinkled. “What accent?”

I would have shrugged, but the weight of his conversational choice bowed my shoulders. “No clue. All I know is, they didn’t hire me.”

“How long have you been out of work?”

“Six months now? Seven? Eight? I don’t know anymore. It started as a furlough but went south from there.”

“What did you do before the furlough?” He was still shouting to be heard, and I was yelling my answers back, which gave this whole conversation the feel of a Picasso-esque interrogation.

“Government contractor with the DOJ. I worked in research. Did a lot of fact-checking for legal documents and stuff like that. All pretty ordinary and boring.”

What a weird question. “Yeah. Why?”

I couldn’t help myself. The words slipped out of my mouth before I could wrangle them into submission. “Why? Are you a spy, Maxie?”

His vibrant blue eyes flared wide, but whether it was the s-word or the M-word that did it, I couldn’t be sure. “I know of a job. Just checking your credentials.”

Despite the ridiculousness of the situation, I yelled my reply. “Mid-level.” 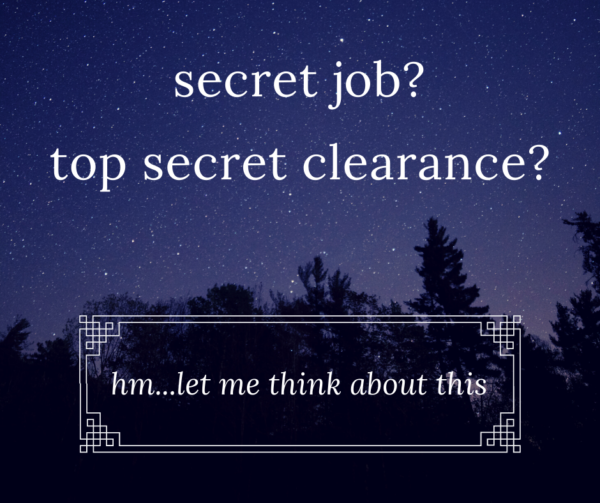 I nodded. He didn’t need to know that I’d been written in on a few Top Secret projects. My official clearance was plain ol’ Secret.

He nodded, tapped his fingers against his knee, and went back to the sandwich on his plate.

Could a girl feel any more dismissed? Other than when she was being rejected for a job, that is.

A couple bites later, he wiped his mouth with a flimsy, white paper napkin as though it was the finest of linens. He sat back and crossed his arms. “Come to work for me.”

Say what? I must have suffered some kind of hearing damage from the racket in his place. Maybe a mini-stroke, too. I could have sworn he’d just said…

“This job you mentioned – was it always with you? Or did you come up with that just now?”

His gaze flitted away from my face. Like any concerned parent, he’d placed himself where he could easily see the entire playground and could spot Alistair and Amaria at a moment’s notice. Just because he was looking at the playground didn’t mean he was avoiding my question…

“I invited you to lunch to talk to you about a part-time nanny position. The kids’ last nanny quit without notice. You’re good with them. They like you, and they don’t walk all over you. When you said you were between jobs, though, I realized you might be interested in something more. My assistant is going on maternity leave soon, and I haven’t found an adequate replacement yet. You might be able to fill both rolls.”

I narrowed my eyes as I stared at him. I was too classy – and too desperate – to glare.

A thousand and one thoughts raced through my head like a herd of kittens after a catnip-laced bouncy ball.

Except kittens didn’t come in herds. What was that word again…?

Oh, yeah. Kindle. Like a kindle of kittens after a catnip-laced bouncy ball.

Only one question came out of my mouth, though. “Does this mean I can’t call you Maxie anymore?”

The smile that flashed through his eyes? Totally worth it.

Thank you for joining me today! I hope you’re enjoying the story.

So, first off – I won’t be blogging again until January, so I want to take a minute to wish you all a Merry Christmas and a Happy New Year! I hope your holidays are filled with the blessing of God’s grace.

And secondly – tis the season, right? So, anyone who comments below will be entered in a giveaway for a $5 Amazon gift card. Thank you all for being so loyal to the Inspy Romance blog. I know I’m not the only author who appreciates you!!