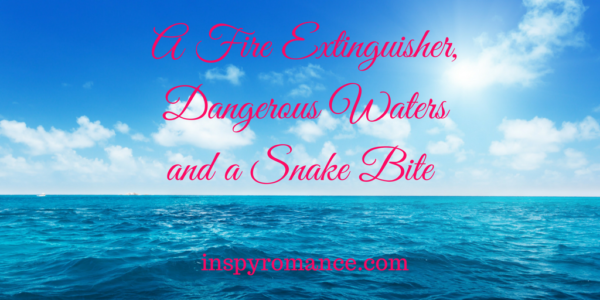 This post started as writing about research for my books, and “dangerous waters” in the title meant the scene in Season of Joy, when the hero’s son falls overboard. Now the consequences of the Hurricane Harvey is the main thing on our minds here, and I learned once again how beautiful waves of the ocean can turn deadly fast. I live in Texas, and though my area was spared, others have been devastated. I’m respectfully asking you to join me in prayer for my beloved Texas, especially the areas that suffered the most.

For years, I’ve wanted to write a romance where hurricane plays the major part, but I never expected to do my research like this. About four months in 2008 after I moved to south Texas, we had Hurricane Dolly, and though it had been much smaller than Harvey, the experience had been scary.

As many authors, I do the research for my books. Sometimes it takes minutes, and sometimes days (and I probably still get some things wrong). I knew how to use the fire extinguisher before I started writing Season of Joy, so when in one of the scenes the tablecloth caught on fire, I just needed to brush up on the knowledge. But when the hero got bitten by a snake, I had a vague idea how to treat the rattlesnake bite before the ambulance arrives. Frankly, rattlesnakes scare me, so I hope I’ll never have to use this knowledge in real life (everything is really big in Texas, including rattlesnakes).

To write Season of Hope, I learned many things about toddlers, thanks to the help from my wonderful readers, and it was a lot of fun.

I also try learning things from books written by other authors, especially how to become a better Christian. I love books where the characters have an amazing spiritual journey and learn a lesson that help them grow. I learn that lesson, as well.

While writing this post, I realized that together with my characters and characters from other books, I learn how to deal with fears. I’m afraid of rattlesnakes, of fire, of drowning, and many other things. But my biggest fear that I shared with one of my heroines is not to be worthy of God’s love.

Research for me can be also looking deeper inside my own soul and putting things out in the open that I’m afraid to admit even to myself.