Years ago, when I started writing, I hadn’t heard of the word ‘genre.’ Once I thought I was ready to submit my work, I found out how crucial it was to choose the right label. Studying my books, it was soon obvious – Romance had chosen me.

Next, I learned that there was a formula for successful romance. After submitting a book to a traditional publisher, a helpful editor clued me in: Boy meets Girl, Boy loses Girl, Boy gets Girl back. It was not devised by the publishers as a way to annoy authors, he explained. Rather, the publishers studied those books that were successful and extracted the formula. It’s basic enough to include any sub-genre, allowing authors all the room they needs to produce a unique storyline.

Taking the three points one at a time:

Boy meets Girl … This doesn’t necessarily mean they’ve just been introduced. They might have known one another since the cradle, but suddenly they SEE one another, as though for the first time. Or maybe they’ve been acquainted for a while, but some unexpected situation has thrown them together.

Boy loses Girl … This is the heart of the book and the possibilities are endless. He might accidentally (or intentionally) offend her, before he realizes he wants her good opinion. She may behave badly in public, for the first time in her life, and he witnessed it – many pages must be turned before he sees the truth of the matter. It could be that outsiders are determined to keep them apart – his mother, her brother. This is usually where God puts in an appearance, nudging characters to forgive and offer one each other another chance.

Boy gets Girl back … Somewhere near the last page, something unexpected occurs and the reader stops clenching their e-reader with a death grip. This leads to the last point in the formula for romance: the happily ever after. 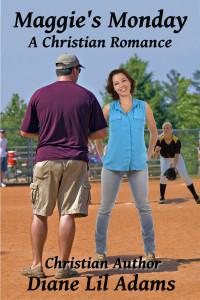 In my stand-alone romance, Maggie’s Mondays, the two main characters have known one another for years. Maggie’s husband left her long ago, but it’s only been a year since Jim’s wife passed away. He can’t deny that he’s attracted to Maggie, but his marriage wasn’t a happy one and he’s afraid to try again. Maggie’s marriage wasn’t happy either, but that doesn’t keep her from wishing Jim would ask her out. Every time she thinks he might, he disappears instead. Odds are against the relationship working out, especially if their seven children have anything to say about it, not to mention Maggie’s invalid mother.

I won’t tell you how it ends, other than to say I always follow the formula with that ‘happily ever after!’

You can find Maggie’s Mondays, along with my other books, on Amazon.com, to borrow or buy. There are many authors named Diane Adams though, so be sure to look for the Lil.