Is anxiety part of our genetic makeup? I was talking to someone the other day who believes her ancestors passed on their worry and stress via genes and there’s little she can do about it. Maybe some of it is inevitable, but I think most of our anxiety is the result of our environment, our past experiences, and especially the things we fear. When I say ‘fear’, you might imagine a criminal threatening someone’s life, or a rabid skunk in your backyard, or the possibility of a tornado or an earthquake. Our fear of those threats is usually manageable, because they occur so seldom.

The fears that make most people anxious are those we face on a daily basis: not fitting in, saying something stupid, talking to a cute guy with lettuce stuck between your teeth. Ratchet up a notch: running out of money before the bills are paid, losing your toddler in a department store, wondering whether that little lump under your arm is going to have big consequences. I definitely begin to feel anxious when I reflect on ISIS and the fate of Christians around the world. There is rarely a time when most of us can’t make a list of our fears, whether serious or minor. How we cope is the difference between a happy productive lifestyle or one wrought with anxiety. 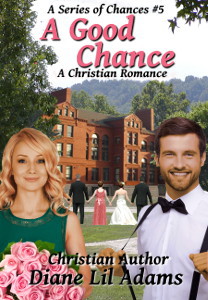 In A Good Chance, Sam fears that he’ll give power to the wrong person. Anna is afraid that her life lacks meaning. Franny is afraid that Sam’s distracted behavior means he doesn’t really love her. Tyler is afraid the worker on the roof will get hit by lightning, but God uses this fear in a positive way. Heather is afraid that Tyler will reject her if he finds out what sort of person she once was. They’re both afraid of what Aurora might do if she sees them talking to one another. Heather’s mother is so fearful, she can’t even leave the house anymore. Nearly everyone in A Good Chance is afraid of something.

A Good Chance, Book #5 in the Chance series, will be published on May 27 (if everything goes as planned). It gives us Tyler’s point of view and introduces a few new characters. Acting on comments in Inspy Romance, I added a short synopsis of the previous books. Eventually, I’m going to go back and add a cast of characters too – another reader suggestion. Thanks!