In honor of my son Matthew’s high school graduation, our family took a trip to Colonial Williamsburg in Virginia last week. We had a fabulous time in spite of the sometimes blazing heat (one day it reached 101 degrees) which somewhat sapped our energy. One of the things that most impressed me was this: our Colonial ancestors were amazingly inventive and creative! Many of the handcrafted items made hundreds of years ago were functional, durable, and extremely well-made. Whether a toy, clothing, a kitchen pot or bowl, a weapon, or a hunting/farming tool, it served its purpose well.

While there, we discovered the reason the taverns aren’t open every day is because the population in the Williamsburg area is declining and there aren’t enough citizens to staff them full-time. And, perhaps not surprisingly, there are dwindling numbers of artisans who are trained in the old trades to work in Colonial Williamsburg to demonstrate to tourists how items were made by our hardworking ancestors.

During one lazy, hot afternoon in Williamsburg, we stopped in at the outlet mall. I’d noticed on the directory board that there was a Longaberger store there. Are you familiar with Longaberger baskets? They are handcrafted and well-made (see the photo below).

Aren’t they beautiful? The Longaberger Company is an American tradition with a rich family history. For years, they employed many weavers and employees in their Ohio company and significantly boosted the economy of that part of the state. I’ve collected the baskets for years, and so the Longaberger store was one of my top five stores to visit at the outlet mall. 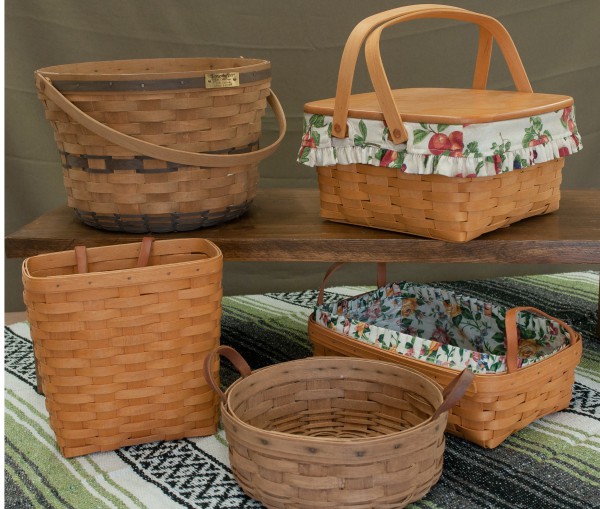 Jim and Matthew had gone in a different direction, and he got there before me and called with the bad news: “The Longaberger store is gone.” I was so disappointed but not exactly surprised. Why? Jim and I visited the Longaberger Homestead (stores, galleries, and a restaurant) last summer and it was almost a ghost town with the merchandise all 50% off, the place nearly deserted, and even the landscaping and parking lots had been neglected.

In Williamsburg, when we were in the nearby Pepperidge Farm store, I asked the sales clerk about the Longaberger outlet store. She told us that it closed its doors on Memorial Day weekend. This was shocking and saddened me greatly, especially as a longtime collector (my kitchen in Massachusetts boasted more than 50 of them, and I used them all, plus Longaberger wallpaper border and valances!). The sales clerk told us (who got her information directly from the Longaberger outlet manager) that the company has been in decline in recent years, and as part of the cost-cutting measures, they’d decided to close the outlet stores. Further, one of the deceased founder’s daughters had been credited with its decline (she resigned as CEO and Director on May 5th of this year), and the company could barely afford to send the pallet of unsold merchandise from the outlet store back to their headquarters in Ohio! That news about broke my heart. I’ve since learned that although the Homestead was sold and now is run by non-family members, they are still alive…and I hope they can hang on.

Let me give you a brief history: The Longaberger Company started with J.W. Longaberger who took a job in 1919 with the Dresden (Ohio) Basket Company. According to the Longaberger website, “As a full-time apprentice, he learned the basket making art by first crafting basket bottoms. Later, he mastered the precise, tight weaving style that would become his trademark. The fifth child born to J.W. and his wife, Bonnie, was Dave Longaberger in 1934. Economically disadvantaged, he stuttered so badly that people had a hard time understanding him, and he also had epilepsy in a time when the condition was not widely understood. He finally graduated from high school at the age of 21, and after working, a stint in the U.S. Army, and getting married, he bought a restaurant and a grocery store, remodeled and expanded, and then reopened them. He was always making money, and his family called Dave the “25-cent millionaire.”

In the early 1970s, Dave Longaberger noticed that baskets were becoming very popular. Dave opened J.W.’s Handwoven Baskets in 1976 in 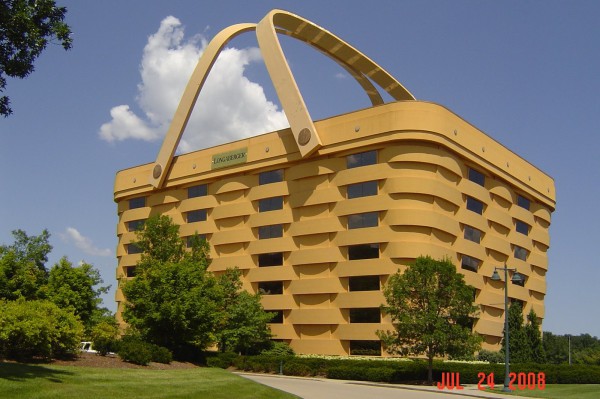 Dresden, Ohio, and an empire was launched when Dave decided that the most effective way to sell the baskets was through home shows. For years, they were extremely popular. Take a peek at the photo of their office building that even looks like the company’s signature Market Basket! I received one for our wedding and didn’t realize it was so valuable until I learned to look on the bottom where the Longaberger brand is always featured. I now have several baskets signed by members of the Longaberger family. A relative found several in a Boston area garage sale, some which were rare and valuable (at least at the time; now I wonder if they’re worth much). Our longtime, everyday china is Longaberger Heritage Green, and we even once stayed overnight in the Longaberger Hotel!

So what happened? I have no concrete answers, of course, but I have some theories. For one thing, I remember how there’s been a longtime perception that the baskets are too expensive. They are expensive, but for the quality craftsmanship, I consider the baskets very well worth their price. Ironically, the company stressed that the baskets are meant to be used, and not just to sit around and look pretty. As my grandmother might say, “They got too big for their britches.” The company diversified and went into many different directions. Instead of growing the company, it might ultimately have hurt it. Perhaps going back to the original concept might be best: offer fewer but tried-and-true products. My oldest daughter, Sarah, made a sadly accurate statement when she reminded me that we now live in a “throwaway” society. Younger generations would rather buy something cheaper that does the same job, even if it doesn’t last as long. Where does this leave handcrafted, quality products? Are they destined to go the way of The Longaberger Company? I sincerely hope not!

Finally, how does all this possibly apply to my contemporary Christian romance novels? Well, the way I see it, I do my best to always write quality fiction. I don’t want my books to be “throwaway” books where a reader blows through them and then promptly forgets about them. With every book I write, I strive to make it memorable with characters, stories, and book covers that will stick in someone’s mind. More importantly, it’s my prayer that the reader will glean a spiritual truth to apply to her life. I want her to understand that she is loved by the Father and that He craves fellowship with her. I want her to understand the hope to be found in a personal relationship with Jesus Christ.

Why? Because I feel that the Lord demands my BEST. He is the original and ultimate Creator, and as such, He expects the quality of my craft to be the very best that I can make it. Like our Colonial ancestors, I want to be inventive and show ingenuity. Long after I’m gone, I want to leave a LEGACY of quality fiction for my children and their children.

For we are His workmanship, created in Christ Jesus for good works, which God prepared beforehand so that we would walk in them. Ephesians 2:10 (NASB)

Blessings, friends. Until His Nets Are Full,