It seems like there are two kinds of people in the world: those who love Christmas in July and those who don’t really care. I’ll be the first to admit that I’ve always fallen firmly in the latter camp. I mean, I love Christmas…at Christmastime. Until a few years ago, I was also not one to read Christmas books and watch Christmas movies. The whole Hallmark Channel Christmas movie thing? Completely lost on me.

And then I found some friends who wrote Christmas books and, well, I like to read things my friends write. So I took a chance. And I got hooked. Which meant I had to completely rethink my stance on those Hallmark movies. Hooked again. (My hands-down favorite is The Christmas Card. The acting is not amazing, yet I still sit there at the end with tears dripping down my cheeks even though I’ve seen it more times than I can count.)

So it probably won’t surprise you that I’m now tentatively dipping my toe into the whole Christmas in July idea. (Because really, another chance to put on a much-loved movie shouldn’t be avoided lightly!) And in this case, that toe-dipping can benefit you (if you act fast)!

Today is the last day of a special promotion for Christmas in July. We’ve rounded up 40 different Christmas books — and they’re each just 99 cents. You may have read some of them already, but I’m guessing there are some new-to-you delights still to be found.

My offering is one I’ve highlighted a few times already here on InspyRomance. Operation Mistletoe is, in fact, my only Christmas book to date. (Maybe I need to remedy that. Hmm.) 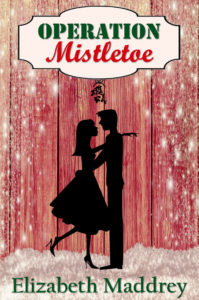 Here’s the blurb, just in case it’s new to you:

For the last ten years, disaster has struck on Christmas Eve, leaving Tori dreading the holidays. When she’s assigned to cover the light displays for her newspaper, she’s determined to spend as little time on the article as possible. Especially once she realizes she’s to feature frat boy Gabe “The Babe” Robertson, her former college crush.

Gabe Robertson is a different man than he was in college. Every December, he transforms his acreage into a winter wonderland designed to celebrate the birth of Christ and share God’s love with the community. He also uses the lights to raise money for Operation Mistletoe, an organization that sends Christmas to troops stationed overseas.

Unable to set aside her prejudice, Tori looks for ulterior motives in Gabe’s actions and determines to dig deeper. Will her investigations destroy any chance of a Merry Christmas?

Even if you’ve already read Operation Mistletoe, I hope you’ll swing by the Christmas in July page and browse the other offerings to see what you might be missing! (But hurry! The sale only officially runs through today. Some titles may still be 99 cents after today, but others will go back to their regular price tomorrow.)

Do you have a favorite Christmas movie? I’d love to hear about it in the comments — there’s probably something for me to add to my list!