Sometimes there are wonderful background characters who pop up in a story. For me, that was Rochelle Keim, known to her younger family and friends as Aenti Chelle in the Seasons of Pinecraft series. For books one and two (A Season of Change, and A Path Made Plain), she stepped up to be a good friend, a listening ear, a caring hostess.

But until I started paying more attention to her, all I knew about her past was that something hurt her a great deal had led her to Pinecraft, the Amish-Mennonite village in the city of Sarasota, Florida.

I knew there was a man in her past, someone she thought she would never see again, and until now had not entered her world until his own path in life changed.

I sat down one night, wondering what in the world besides geography kept them apart for so long.

It wasn’t easy to learn. Rochelle, bless her heart, had spent her adult life taking care of other people and downplayed her own heart issues. She was one sweet yet tough nut to crack.

I knew Rochelle had once studied to be a nurse after she’d finished her childhood education, but then quit her studies and moved to Pinecraft.

I learned how she came to Pinecraft and became a successful business owner, employing a number of cleaning staff that had an excellent client list.

And then, one day, at the beginning of her story, A Promise of Grace, Chelle realized she was tired of cleaning up after other people and decided to go back to nursing school.

When Silas Fry reenters her life, it’s during a period of change for her too. There’s almost twenty years of living life that separated them both, not to mention a marriage, children, his missionary pilot work in Mozambique, and her quiet and orderly life in Pinecraft.

Have you ever wondered what you’d say to a younger version of yourself? At times I wonder how I’d react if I ever encountered an older version of myself, trying to give me advice.

Silas and Rochelle both remember what it was like to be young and in love. But now life has tempered them both and they are strangers with a past, realizing that what lies before them is the possibility of a love rekindled. 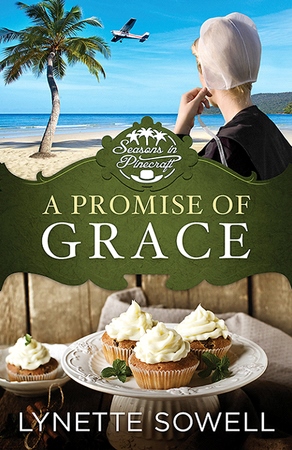 Now, here’s a snippet from A Promise of Grace:

Of all days for the washer to break down, and her with a pile of laundry. Rochelle Keim hauled the laundry basket from her house to the van, and plunked it into the back. Part of her kapp caught on the edge of the van’s hatch and the kapp, including hairpins, nearly slid off her head. Ow.

The village of Pinecraft had its own Laundromat, the only one Rochelle knew of with its own set of clotheslines—bring your own clothespins.

Betsy and Emma, her Amish nieces a couple of times removed, were busy with a morning of wedding planning. How Rochelle wished she could have joined them. But no, she said she’d take care of all the household laundry, including bedsheets, towels, and clothing. Afterward, she had one cleaning client to visit, Emma had her own clients to serve, and Betsy was needed back overseeing business at Pinecraft Pies and Pastry.

Rochelle tried not to sigh. The action wouldn’t change anything. Some days, she was tired of cleaning up after other people, herself included.

She fetched two more baskets of laundry, one of them sopping, from the house, then slammed the van’s hatch closed.

She had already placed a call to Henry Hostetler, one of Pinecraft’s handymen and contractors extraordinaire, about checking the washing machine if he had a spare moment. But the older man was busy finishing replacing a roof, and promised to stop by on the way home just before suppertime.

Rochelle drove through Pinecraft’s sunny streets, giving the occasional three-wheeled adult cycles wide berth. Most people walked or bicycled the village’s streets, nestled on both sides of Sarasota’s busy Bahia Vista Avenue, and flanked on one end by the meandering Phillippi Creek.

Thankfully, she tucked her van into one of the few parking spots. She wouldn’t have to lug her laundry too far. An Old Order Amish woman, Rochelle couldn’t recall her name at the moment, moved her tricycle with its little trailer out of the way. The woman waved and smiled, then mouthed a gut morning.

Rochelle returned the wave and smile. She reminded herself she was blessed to live in such a place as Pinecraft, where Amish and Mennonites of all orders and fellowships converged, most of them during the winter months. A few, like her, called the village home year ’round. Right now, the place was what some might call the proverbial ghost town.

But she couldn’t imagine herself living anywhere else. The only other home she’d known was Ohio, and she’d severed ties with that part of her life a long time ago. Her parents, formerly Amish, left their order when she was but a girl, and joined the Mennonite church.

Even her father didn’t quite understand why she’d uprooted herself and moved to Florida when she was barely twenty.

“God will guide your path; don’t be hasty,” her father had said.

Rochelle smiled at her father’s words as she tugged the first load of laundry from the back of the van. She’d used those same words when providing counsel to her younger Amish nieces. However, haste hadn’t goaded her to leave her family in the Midwest.

With the age of forty growing closer, day by day, month by month, with half a lifetime of years behind her growing up in Ohio, she wondered if she’d have listened to herself when she was her nieces’ ages of twenty and twenty-two.