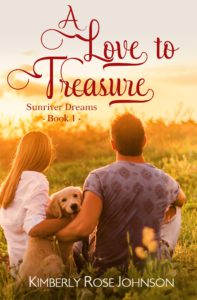 A Love to Treasure is very special to me since it takes place in my favorite place to vacation, Sunriver, Oregon. I began writing this book a long time ago, but due to other contracts this book kept getting pushed aside. I finally sold it, and I was able to take the time to finish a journey that began four or five years ago. :)

School teacher Nicole Davis is on summer break, but this vacation is unlike any other. Her beloved Grandmother’s final wish has landed Nicole smack in the middle of her favorite destination—Sunriver, Oregon, following Grams’s clues on a mysterious scavenger hunt. Unexpectedly, Nicole finds more than just a fellow sleuth in a handsome police officer, Mark Stone. But Mark must return to his job in Portland at summer’s end, and Nicole must guard her heart.

Mark is hoping for a quiet summer in Sunriver as he contemplates his future in law enforcement, but a string of burglaries draws him from his self-imposed break from detective work and thrusts him into the middle of the investigation. To complicate matters, Nicole is in jeopardy, and he knows his growing feelings for her could cloud his judgment. Will their differing career goals be the end of their summer romance—or just the beginning of forever after?

Here’s a short excerpt: Be sure to scroll to the end to see some pictures my son took in Sunriver.

Nicole Davis drove past a huge welcome sign to Sunriver, Oregon, and grinned. She was finally here. She loved this resort community and still couldn’t believe it would be her home for the next few months.

She bore to the right around the traffic circle. Suddenly a black car came out of nowhere. Nicole swerved and slammed on the brake, her front bumper barely missing the side of the black car. Her heart pounded as she weaved her Mini Cooper onto the miniscule dirt shoulder a few feet from a large pine tree. She put the car in park, her breath coming in quick puffs. She looked around to make sure she hadn’t hit anything. Whew. Everything looked okay.

The crazy driver who ran her off the road drove around the circle again and pulled off the road in front of her. This couldn’t be good. She gulped as a dark-haired man wearing jeans and a dark gray T-shirt stalked toward her.

Her gut clenched. She checked her reflection in the rearview mirror and noted her wide green eyes filled with fear. Not good. She needed to appear unaffected by the incident or he’d see her vulnerability She took a deep breath then let it out in a whoosh. After making sure no cars were coming, she stepped out of her Mini Cooper and onto the shoulder, refusing to be intimidated by the man. His height caught her by surprise. Most men were only a few inches taller than her, but not this guy. He towered above her five-foot-nine inch frame. And those biceps—maybe she should’ve stayed in the car. But he didn’t look dangerous, only irritated.

She offered him a tentative smile. “That was a close call.” “No kidding. You didn’t yield.” He pointed to a yellow sign.

“Oops. Sorry.” Her face heated. Grams always said she barreled through life. But she generally obeyed traffic signs. “I didn’t see the sign.”

She focused on the handsome man before her with close-cropped hair and dark brown eyes the color of Swiss chocolate.

His brows turned down. “Are you okay?”

Her gaze dropped to his mouth, which was pulled into a frown. She shook her head and focused on the concern in his eyes. “I’m fine. No harm done, as they say. And I really am sorry about not yielding.” She backed against the car door. Her grandmother had paid for this adventure, and she would enjoy it—she just needed to be more careful. “I haven’t been to Sunriver in years and was trying to find the resort lodge.” She took in her surroundings—a paved bicycle trail, roadway, and woods. Beyond the woods she spotted several structures dotting the landscape. “I don’t suppose you could point me in the right direction.”

He peered down at her, his stance relaxing. He even ventured what appeared to be a small smile. “Like you said, no harm done.” He pointed slightly left. “The lodge is that way.”

The breeze rustling through the tall pine trees didn’t help the heat burning in Nicole’s cheeks. “Thanks.”

“No problem. Watch for the signs. They’ll keep you on track.” He sauntered back to his car, then pivoted. “By the way, welcome to Sunriver. I hope the rest of your stay goes better.”

“Uh, thanks.” Nicole slid behind the wheel and drove away, hoping she wouldn’t run into that man again. Talk about embarrassing! She breathed in deeply of the pine-scented air and focused on her reason for being here—Grams’ letter. She owed it to her grandmother to fulfill her final wish.

Nicole turned left into the lodge’s parking lot and pulled into a spot. The lodge was even prettier than she remembered. The planters, a combination of red, purple and white flowers mixed

among shrubs and trees, were perfection. She got out, grabbed her luggage and walked toward the grand entrance. A young couple strolled hand-in-hand nearby, and several people dressed in business attire ambled out of the lodge. The sound of crashing water drew her attention. A beautiful rock water feature off to the right of the main entrance looked like the perfect place to escape the busyness of life.

She dragged her attention away from the waterfall and climbed the concrete steps to the entrance. The huge door opened with surprising ease. She pulled off her sunglasses and allowed her eyes to adjust to the dim lighting. Straight ahead, stairs led to a restaurant where a few guests milled about. To her left, several smartly dressed people stood behind a counter waiting to check in guests.

Nicole squared her shoulders and marched toward check-in trying to ignore the knot in the pit of her stomach. Why was she so nervous? Grams had loved scavenger hunts, and this vacation promised to be an adventure, beginning with the letter that led her to the resort.

Nicole approached the first person at the long reception counter. “Hi, I’m Nicole Davis. I have a reservation.”

The woman smiled. “Welcome to Sunriver. I love your hair color. Is it natural?”
Nicole nodded. “Yes and thanks.” Grams had loved her long blonde hair as well.
“You’re lucky.” She lowered her voice. “Mine’s from a bottle.” She sighed then clicked on

the computer keyboard. She raised a brow. “You have a package. I’ll be right back.”
A package—so the game begins. Grams had a creative streak few could compete with. The

package would likely contain the first clue to this adventure Grams had sent her on.
The woman came back and held out a small box wrapped in bright red paper with a shiny

white bow on top. “Thank you.”

“You’re welcome.” She handed her a key card, then showed her where her room was on the map and explained how to get to it. “Enjoy your stay.”

Nicole pocketed the key. “Thanks. I’ll try.” She left the building and followed the path to the stairwell that led to her nearby suite. What was in the box? Whatever it was, she knew Grams had put a lot of thought into it.

Nicole’s throat burned at the thought of her late Grandmother—so much regret. If only she’d spent more time with Grams and less time working on lesson plans this past year. She’d loved her grandmother and wished for a do-ever, but death didn’t have do-overs. Instead, Nicole would honor her grandmother’s final wish and play along one last time. Hopefully this game wouldn’t end in disaster like the time she’d ended up in the middle of a lake with a broken oar.

Here are some pictures of a couple scene locations in the book. 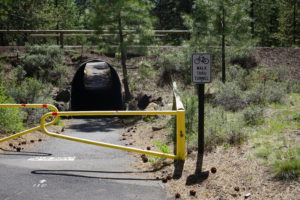 A tunnel Nicole rode her bike through, rather than walked. :) 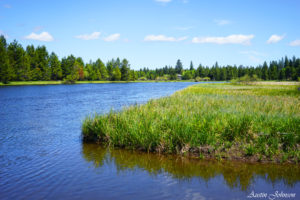 The Deschutes River where they went canoeing.

I know we’ve talked about setting here before and that’s probably because settings are so vital for a story. I consider the setting to be a character in the book. :)  Do you prefer settings in the city, country, suburbs, small towns, foreign settings? What draws you to books set in those places?