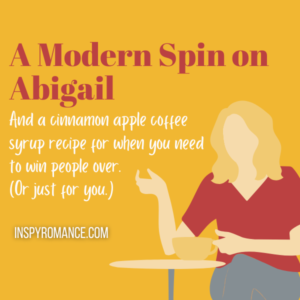 Ever think about how biblical stories might play out in the modern world?

Since I borrowed bits of inspiration for the Rhythms of Redemption Romances from the people and events of King David’s life, this is a question I’ve gotten to play with.

For To Believe in You—which just released Monday!—little bits of inspiration came from the account of Abigail.

When we first meet Abigail in 1 Samuel 25:3, she’s married to a “harsh and badly behaved” man named Nabal, but Abigail is noteworthy for being both discerning and beautiful. (What a compliment!!) When Nabal offends David, Abigail intervenes by seeking forgiveness and offering David and his men a bounty of food. Her actions save her family and catch David’s notice so that after her husband dies, David asks her to become his wife.

Meanwhile, in To Believe in You, Lina Abbey didn’t marry a harsh and badly behaved man—but she would’ve if her fiancé hadn’t shown his true colors. When the story starts, she’s dealing with the trust issues that naturally follow a breach of trust. When her ex reaches out, she’s thrown for a loop because as much as I admire Abigail, learning to act like her consistently is—for most of us, anyway—a process, and one I thought it was important to honor. 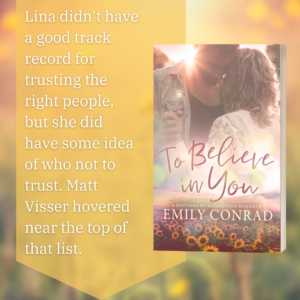 Bit by bit, Lina heals and learns to trust again, in part thanks to the hero of the story, Matt Visser.

Matt’s character is not based on Nabal, so when he lands himself in trouble, it’s for defending Lina. Mirroring Abigail, Lina packs up the best gifts she can find in her kitchen and goes to apologize for the disturbance (while defending Matt’s actions).

What does she pack up?

She doesn’t have much notice before the morning meeting, and in the modern day, presenting someone with raisins and cakes of figs might seem a little odd, so Lina goes a different direction.

She takes two unopened goodies from her kitchen: lemon cake tea inspired by this kind from Tazo, and some coffee syrup that was a special favorite of hers.

The coffee syrup is a souvenir from one of her favorite coffee shops, but she says she’s willing to part with it because she likes the lattes made at the local coffeehouse. Since it’s fall, she’s hooked on apple crisp lattes. Starbucks makes a delicious apple crisp latte, but if you’re feeling adventurous and like to cook, here’s my cinnamon apple coffee syrup recipe:

1 c granulated sugar (I like to use natural cane sugar, but regular will work)

1/2 t salt (I like salted caramel, which uses a lot of salt. If you don’t, decrease this to taste.)

Combine the first 4 ingredients in a large saucepan and simmer over medium heat for 10-15 minutes until reduced by about half. Using a large pot helps, but be sure to watch the pot as this can bubble over. Once reduced, remove from heat and add vanilla and apple flavoring.

*Notes on the apple flavoring: A little goes a long way. You can always start with less and add more to taste. I had to order mine online as I couldn’t find it locally. I’ve noticed that the apple flavoring can act like lemon juice, thickening milk in an unpleasant way if I mix the syrup with the milk before adding in the coffee, so when making a latte, add the coffee and syrup, then the milk.

That said, this isn’t a finicky recipe, so feel free to experiment with adding more or less of ingredients to taste!

Who knows, you might even be able to get yourself back in someone’s good graces by whipping up a batch and sharing it with them! 😊

To find out whether the gifts worked for Lina, I hope you’ll read To Believe in You. Learn more about the story here. 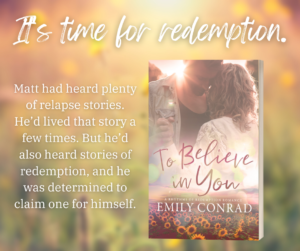 Have you tried a recipe from a novel before? Or perhaps looked up a recipe to make something like what is described in a book?