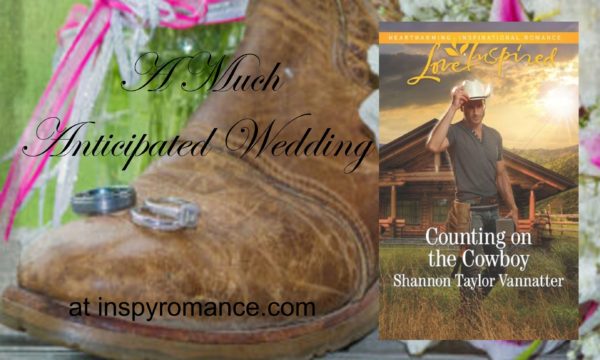 Over the years, I’ve written lots of fictional weddings. But around here, I’m excited about a real one coming up. Let me backtrack.

I’m an only child and it never bothered me. I had close cousins and lots of friends. But when my older cousin became an aunt when I was 13, it hit me that I’d never be an aunt. My mom said if I married someone with siblings, I might get the chance at nieces and/or nephews. But I said it wouldn’t be the same.

Then this really cute guy came to my school and when I saw him walking across the campus, I decided I was going to marry him. Six months passed and he never noticed I was alive. Back then, I was painfully shy and didn’t know it until later, but everyone thought I was stuck up because I didn’t talk to anyone. He says he noticed me, but thought I was out of his league. I thought the opposite. I mean, look at him. 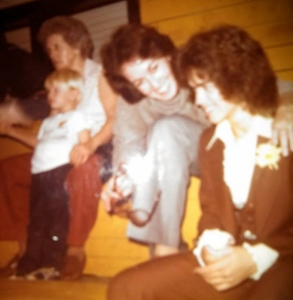 This picture was taken on a day that changed my life. Sorry it’s blurry, but it’s a picture of a picture since we didn’t have digital back then. It was Fall Festival night in the gym at our school. The really cute guy was voted to represent our class in the pageant. I mean, of course he was. Just look at him. That’s him, his mom, and grandmother. And the little guy, that’s Jason.

My life changed that night because I was wearing dress pants and heels. Honestly, it was hard to traverse those slick bleachers safely in heels. Though I had done it thousands of times, that night, I got the nerve to use his shoulder as a prop when I stepped down a level. Right there next to his mom. I still can’t believe I did it. And it worked, he noticed me.

A few weeks later, we were going together, even though we didn’t actually go anywhere since I was only 14 and my parents wouldn’t let me date yet. But we were a couple all through high school and married a year after graduation. I got Jason, his nephew, in the package, loved him from day one. And realized that a nephew by marriage was just as good as by blood.

Jason grew up. Even though he was raised in church, he got in a bad crowd. At one point during his last years of high school, we tried to get him to move in with us. He didn’t because he knew we’d have rules. He managed to graduate and get a job. But by the time he was nearing thirty, he was divorced with a son, jobless, and living with relatives.

For a long time, we didn’t know what the problem was. We thought he was just lazy. His personality 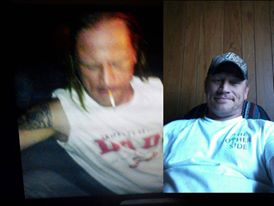 changed. Gone was the fun-loving guy with the great sense of humor. In his place, a stranger with stringy hair and a bad temper. Family members thought he was bipolar. We suspected drugs. Since we had a young impressionable son who thought Jason was cool, we had to cut him out of our lives. Tough love is hard, but we didn’t want to enable him.

For ten years, we lost Jason. We prayed and worried we’d get a phone call that he was dead. About three years ago, he got busted. Felony charges lurked. While he was in jail, a high school friend of his involved in a local jail ministry, visited and shared his testimony. Jason rededicated his life to Jesus. He got out on probation, but he had to go to church and have the preacher sign a form saying he came at least once a week. He came three times a week. He had to take bi-weekly drug tests and go through a drug counseling program. And he had to get a job. 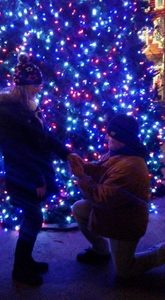 We were skeptical at first, afraid to trust that the change in him was real. But over time, we couldn’t deny that Jason was back. And on fire for Jesus. He got a job, got his own place, repaired his relationship with his son, and found a wonderful Christian girlfriend. Over the last two and a half years, we’ve gotten to share holiday gatherings, birthday celebrations, and life in general with him. The split picture above is a self-portrait he did of himself showing the difference drugs and clean has made in him.

He finished his probation and his last drug test was over a year ago. I’ll admit, I was kind of afraid he might get more lax on his church attendance. But he hasn’t. He still attends three times a week, teaches teen Sunday school class, works in the jail ministry, and is involved in a men’s Bible study consisting mostly of former addicts. He proposed to his wonderful girlfriend last Christmas.

So it’s celebration time around here with the wedding a week away. We have family coming from Texas on Thursday and staying with us. My house is in a state of preparation for company and lots of family gatherings with meals before the wedding, decorating the church, and celebrating the happy couple. 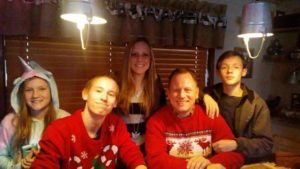 This wedding was a long time coming. It took lots of tears, worry, prayers, and heartbreak to get here. I’ll admit during his drug years, I gave up on Jason. But not on God. So if you have a family member lost to drugs, don’t give up, 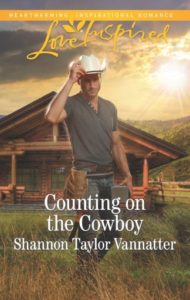 keep praying. God is bigger than drugs. And here’s the proof. This is their soon to be blended happy family at our house last Christmas, shortly after the proposal.

Since I often incorporate things that happen in my real life into my books, of course the family member on drug theme wound itself into my latest book, Counting on the Cowboy. So, let’s talk weddings and blessings. Any real life weddings coming up that you’re excited about? Has God restored a family member or loved one to you lately? Any blessings you want to share? Comments will go in the drawing for a copy of Counting on the Cowboy.