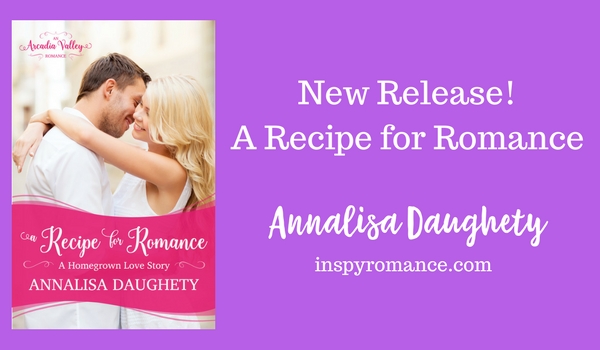 The second book in my Homegrown Love Stories series, A Recipe for Romance, released yesterday! This is part of the Arcadia Valley Romance Series, a multi-author series. It centers around down-on-her-luck cookbook author Olivia Jennings and cattle rancher Wyatt Mason.

Here’s a peek at the beginning of the story:

Grandma Jennings’ homemade chocolate cake might not heal a broken heart, but it will at least take the sting away for a little while. —The Reality of Cooking: One Woman’s Search for Love and the Perfect Recipe by Olivia Jayne Jennings

“These are the worst times of my life.” Olivia Jennings gripped the plush leopard print blanket and pulled it over her head. “Turn off the TV, please. I’m tired of seeing my face.” She curled up in a ball and wished she had a time machine. And better decision-making abilities. Olivia jumped when the blanket was suddenly snatched away.

She looked up with a scowl at the cover stealer. “It’s not fair.”

Brooke Lockwood tossed the cover at her sister. “Dramatic, much?” She clicked the TV off and sat down on the bed next to Olivia. She reached over and patted her on the arm. “It’s not as bad as you think.”

Brooke grabbed the blanket and held it out of Olivia’s reach. “Nothing you can’t get through. Jennings women are stronger than that.”

Olivia felt a pang of shame. Her troubles were nothing compared to the things her older sister had dealt with over the past few years, losing her husband just before she was set to give birth to their first child. Now Brooke was a widow with a toddler. “I guess.”

“Want to talk about it yet?”

Olivia shook her head. She’d kept most of the details of her recent stint on a reality TV show a secret. Her sisters only knew that it hadn’t gone well. “What was I thinking?”

Riley Jennings walked into the bedroom in time to hear Olivia’s question. “I believe your justification to us when we tried to talk you out of it was that competing on national TV for the love of a hunky weatherman would somehow boost your media career and help you sell more cookbooks.”

Olivia frowned. “I’m pretty sure the opposite may be the case.”

Riley sank into the recliner next to the bed. “Blake just left. We watched the first episode and thought it seemed to go well. In fact, I even mentioned to him that I thought there was a spark between you and Austin Granger. Or maybe that was just some kind of TV magic.”

“There was a spark.” Olivia really didn’t want to relive the last three months, but seeing how her relationship failure would be playing out in living rooms across America for the next several weeks, maybe she should at least come clean to her sisters. “I knew him before I auditioned for the show. We worked at the same network for a short time.” Olivia was a morning show host for a syndicated television show based out of New York. She’d recently started to fill in from time to time on one of the bigger morning shows, and had thought it might be her big break.

“That’s right,” Brooke said. “Didn’t you two even do a few appearances together?”

Olivia nodded. “Yeah. We weren’t really friends or anything, but at least he knew who I was.”

Riley rolled her eyes. “Well why wouldn’t he? Your cookbooks have done well and those cooking segments you do are great. Don’t sell yourself short—you brought as much to the table as he did. More, if you ask me.”

Olivia couldn’t help but smile at her younger sister. “When did you get all wise and stuff?”

“She grew up while you were off chasing your dreams,” Brooke said, matter-of-factly.

“I guess so.” Olivia picked at the chipped polish on her nails. It had been eons since she’d had a proper manicure. “Anyway, I kind of think—at least I hope—that these first few episodes won’t be too mortifying.”

“So, it’s not a stretch to guess that he didn’t pick you in the end, right?” Riley asked.

Olivia made a face at her sister. “I’m under contract not to talk about that stuff. I’m not supposed to tell how long I lasted on the show or what happened in the end.”

“Well we pretty much know that you stayed on till at least near the end,” Brooke said. “We know how long filming took place and we know when you were back in New York.”

But they didn’t know what had happened when she’d returned to the city. “I can trust that you guys won’t tell anyone this,” she began. “And I’ve been warned that as the show continues to air, media may come here and start asking questions. So, you have to stay quiet.” She looked from one sister to the other.

“I was one of the final two women.”

“I knew it!” Riley exclaimed. “I knew you’d make it till the end.” Her grin faded quickly as Olivia shot her a look.

“That makes it harder, though, doesn’t it?” Brooke asked quietly. “Because if you were in the final two, that means you had feelings for him.”

“You came home because your heart is broken.” Riley reached over and put her hand on top of Olivia’s. “Is that why you’re back in Arcadia Valley?”

If only it were that simple.

I’m super excited for you to get to know Olivia a little better and to catch a glimpse of what’s going on with Kate, Riley, and Brooke.

You can find out more and purchase a copy here.

And in honor of the new release, I want to do a giveaway! In A Recipe for Romance, Olivia shares some of her favorite recipes and we learn that she loves to cook appetizers and desserts. How about you? What’s your go-to recipe for? Let me know in the comments for your chance to win a e-book of A Recipe for Romance. You have till January 31 to enter!