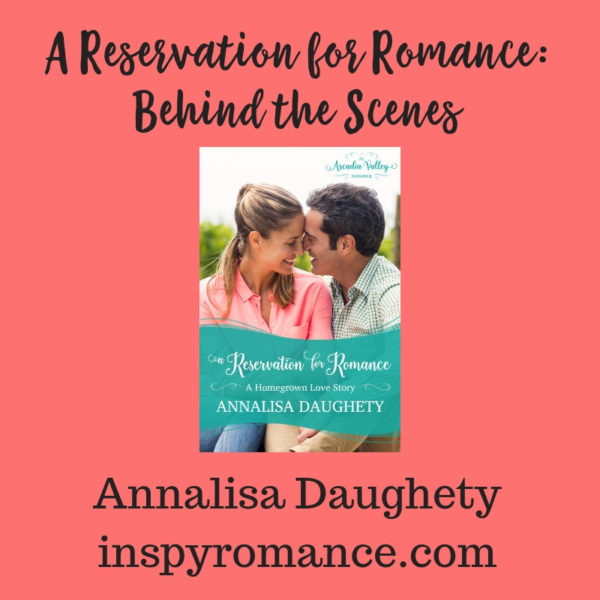 A Reservation for Romance, the third and final installment of my Homegrown Love Stories series is finally releasing this week, and I’m hopeful you will enjoy Brooke and Grant’s story. I’ve shared before that Brooke Jennings Lockwood is one of my all-time favorite characters, and I really wanted to do her story justice.

So I thought I’d share with you some behind-the-scenes information about the story for those of you who are reading it this week.

When I created the Jennings sisters, I knew immediately that one of them would have to be a widow. For me, it just wasn’t plausible to have three girls in the same family all between 25-30 to all be single. I felt strongly that at least one of them would’ve found love previously, which led to the creation of Brooke’s character.

We first meet Brooke in the novella that kicked off the series and from her very first scene, we get a sense of her role in the family. She’s the oldest sister (and a year older than her cousin, Kate, whose love story is center stage in the novella) and is often the voice of reason. She’s the one they go to for advice and the one who has a reputation for being the calm one in the family. Brooke has suffered great loss in the death of her husband, but she has carried on for the sake of their son.

Because she was happily married, she also dispenses relationship advice to her sisters and cousin—but in Brooke’s own story she’s the one needing the advice because she’s never really had to date before. She and Ed met in elementary school and had their first date just as they turned sixteen. So while the other girls have “bad date” stories and lots of experience flirting and accepting dates, Brooke has none. So not only does she feel out of her element, she’s also trying to figure out what it means to date as a single mom.

I usually have a few descriptive words for each character that I go back to and look at and make sure the character is showcasing those traits. Brooke’s words were dependable, thoughtful, and caretaker. By the end of the first book (On Board for Romance) I added another word to my list for Brooke. It was lonely. She was in a phase of life where she’s raising her son and watching her sisters find love. It only made sense that she would, even though she was so happy for them, also find herself feeling lonely.

I wasn’t totally sure early on exactly how her story would unfold, but I always knew WHO it would unfold with. In fact, we see her first interaction with Grant Ward in the novella. Through the next two books, I was always careful to have some interaction between Brooke and Grant because I felt like with her situation, her love story would be with someone she had actually known for a while.

I’m pleased with the way Brooke’s love story played out—I think a story about people who have experienced loss and brokenness yet still find a way back to a place of happiness and contentment are some of my favorite kinds of stories.

And now, I have a question for you! I can’t remember the last time I had time to sit down and read a book…I’m sure I’ve missed a good one. (or two, or ten!) If I only have time to read ONE book over the upcoming holiday break, what do you recommend??