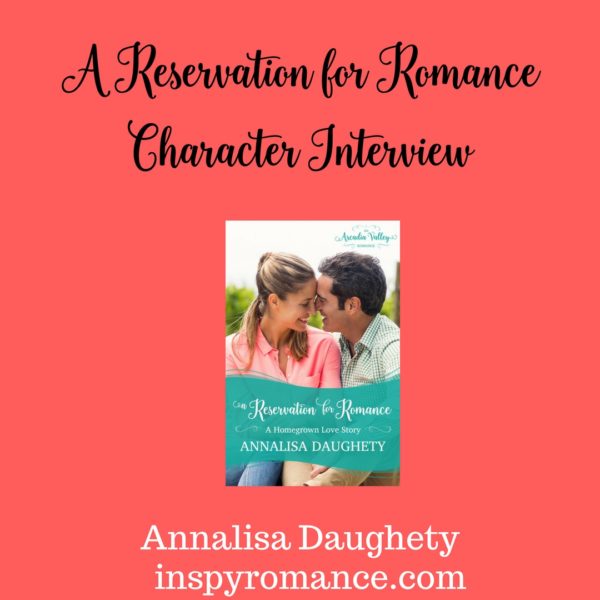 It’s moving week for me and my family, so as you can imagine, my stress level is pretty high. Since I’m mentally, physically, and emotionally exhausted, I decided it might be best to leave this blog post up to the lead character in my next book, Brooke Jennings Lockwood.

A Reservation for Romance releases in July, but many of you have already “met” Brooke in A Romance Rekindled (part of Romance Grows in Arcadia Valley), On Board for Romance, or A Recipe for Romance. And if you haven’t, there’s still time to read all three of those before Brooke’s story releases!

And now, here’s a character interview with Brooke:

Question One: As the oldest of the Jennings sisters, what do you think is your role in the family?

Brooke: Laughing. “Can we just call me the most mature? Actually I joke with Riley, Olivia, and our cousin Kate that once everyone hits 30, we can just consider us all the same age. They aren’t onboard with that though. But seriously, I think my role is mostly advice-giver and the one who tries to calm everyone down when they hit rough patches.”

Question Two: Then I guess it’s safe to say that you are the “calm” one?

Brooke: “Most of the time. Although I’ll admit sometimes raising a toddler on my own makes for some decidedly not calm days. But I think losing my husband and then giving birth to our first child in such a short span of time has made me seek out the calm. It would have been so easy, especially when Ed passed away and River was born, to spiral out of control but I clung to my faith and my family as calming forces.”

Question Three: You mentioned that no topic was off limits, so I’m going to ask the hard questions. You’ve been a widow for a few years now. Are you ready to find love again? Or is that something that’s off the table for you?

Brooke: “That is a hard question. In the beginning, I didn’t even think about dating and the idea of remarrying someday made my physically ill. But now that River is growing up and starting to notice that other kids have a mom and a dad and he only has me, it has really made me think about what Ed would have wanted for us after he was gone. Single motherhood is a lonely path. I love my son with my whole heart, but sometimes I do think it would be nice to share my life with someone special. So I guess my answer is. . .yes, but it would have to be with someone who understands and appreciates that me and River are a package deal.”

Brooke: (laughs) “Some days I think a man could sweep me off my feet if he walked through the door and just offered to do the dishes.” (laughs again) “I’m mostly kidding there. Seriously though, I think my perfect man is someone who is kind and thoughtful, and someone who doesn’t tend to be stressed out easily. Definitely someone who is good to River, and truly wants him around. Someone who enjoys the simple things in life—hiking, fishing, or just sitting at a coffee house having a good conversation.”

Question Five: I know you’re busy, so I won’t keep you, so here’s the last question. What do you think draws people to Arcadia Valley? Your cousin Kate, and sister, Olivia, both have moved back after being away. What’s so special about the town?

Brooke: “I never considered leaving. I went to college, but came back and put down roots and have never regretted it. There’s a great community here—I love the church I attend, and there’s always something going on around town. There’ve been a lot of new restaurants and businesses over the past few years, which is fun. I think it’s just a great place to call home. It’s fun to be out at a grocery store or restaurant and run into an old classmate or teacher or someone I used to go to camp with. That pretty much happens on a daily basis. So it’s kind of like living in a place where people know you and care about you. That’s really special these days, and I think that’s why people are drawn to the town.”

A Reservation for Romance will release in mid-July. In the meantime, get caught up on the entire collection: 6 authors, 6 series, all set in Arcadia Valley!