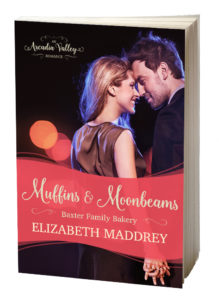 I’m super excited that the release of Muffins & Moonbeams is less than a month away! This book was so much fun to write and the feedback I’ve been getting from my beta readers has made my heart happy. So far people have loved Malachi, and that’s lovely because I have a teeny crush on him myself.

Malachi Baxter is happy to hide in the background and manage the business-end of the family bakery. He’d much rather live in the online world of computer games where he can explore the galaxy and no one has to know he’s deaf.

Ursula Franks designs websites during the day and spends her evenings battling alien races online where relationships are easy and uncomplicated. When she agrees to design a website for the local Community Supported Bakery, she has no idea that Malachi is the real man behind her online persona’s best friend and her own secret crush.

As the two work together on the website, they uncover an attraction, but will they be able to put aside past hurt and insecurity to find love?

I had a lot of fun writing this book. I suspect no small part of that is because I enjoy playing online role playing games like Malachi and Ursula. My husband and I have spent many an enjoyable Saturday on our computers fighting goblins and other creatures together in various online worlds. Often my dad, sister, and brother-in-law join in. We haven’t played as much recently as we did before kids (amazing how those kids eat up your gaming time, isn’t it?) but it’s still something we try to work in when we can.

Ursula also stole a little piece of my heart, and I hope that you come to enjoy her. She struggles with some of the same insecurities I’ve struggled with my whole life. I wasn’t sure delving into that was something I wanted to do, but that’s where the story took me, so…what’s a writer to do?

And now, since I’ve teased you with this much, perhaps it’s time for a little excerpt to round out the appetite whetting?

Malachi clicked on the mission, double checked that he had all the required equipment on board, and opened the map. He chose the first star system he’d need to visit and set the ship in motion. It wasn’t instantaneous transport, which made the game a little more fun. Things could go wrong en route. There were pirates for one, and the handful of people who were irked at him for beating them to prizes. Most of them got over it and remembered it was just a game. But there were others who needed a stiff dose of reality. He tried to steer clear.

“Started without me?” Scarlet Fire’s chat message popped up.

“Just barely. You can still join if you want.”

“Perfect.” Malachi closed out of the armor customizing screen he’d been in and ran through the halls of his ship to the transportation hub. He verified that it was her and clicked to allow her to join the party. Her avatar materialized. He swallowed. It wasn’t as if he didn’t run into roughly the same avatar all the time—you could only customize your clothes and hair—but something about hers always made his heart stop. Which probably meant he needed to get a real life. “Welcome. We’ll hit the first system in about two minutes. How was your day?”

“Got a new client. Always a good day. Even better, they’re a referral from a previous client and they’re local.”

“Don’t you do web design? Why does local matter?”

“Doesn’t necessarily. But sometimes it helps if there are hiccups.” Her avatar’s hair color changed from bright red to blonde. “What do you think?”

“Is that good or bad? Was trying to go a little more real to life.” The hair changed back. “Maybe that’s not a good thing?”

She was a blonde. It didn’t fit his mental image. Not surprising as he’d essentially un-animated her avatar and dressed her in normal clothes when he was forming it. But…blonde worked, too. “No, I liked it. It just took me by surprise.”

“Don’t you ever want people to know the real you?”

He shook his head and tapped the keys to dock the star ship at the port where they’d find the first leg of their mission. The best part of online multi-player games was having the chance to be who he really was without first waiting for people to get over the fact that he was deaf. “Not really.”