The Bible tells us that for everything under the sun, there is a time, but lately I feel like there’s no time for anything. Days, weeks, and months just roll into each other. Can you believe there are only 52 days left until Christmas? Time… Fleeting. Fading. Finite, and at the same time, infinite.

Well, I was gobsmacked when I saw I was up to blog again. Really? Admins, are you sure that calendar is correct? Wasn’t it just last week that I’d blogged? Alright, I believe you that a month has passed and it’s my turn. Time gets away from everybody these days it seems. Sometimes we can do nothing to change our plans to keep up with time…like blogging again so soon. Fortunately, sometimes we can. 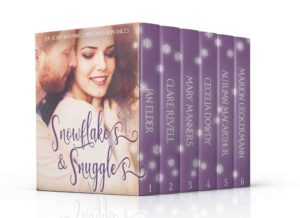 One of the plans I was grateful to adjust was the release date of our upcoming box set which was originally scheduled to publish on October 31. Over the past few weeks, several of our authors have struggled with various issues ranging from their own health, to their mothers’ health, to plain old stubborn writers block. I myself landed in hospital three weeks ago to repair a torn meniscus in my knee. A fellow author said it sounded romantic and wondered if I would write that into one of my books. I told her the only thing romantic about the process was my doctor’s bright blue eyes. Oh, and my wonderful hubby cooking and cleaning as I hobbled about on crutches and did physio for well over an hour every day.

But, I digress. The authors of the Snuggles & Snowflakes box set are finally finding our groove again, and for most, life is returning to normal. While we haven’t finalized the release date, which we’re hoping will be in about three weeks, I can safely say that before November ends, we will be bringing readers another six (we hope and pray) Christmas novellas that will warm their hearts. And once again, there will be mouth-watering, palate-tempting recipes at the end of each story. 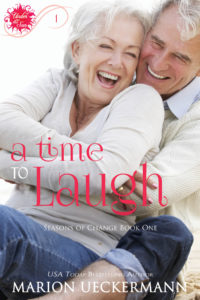 We’ve just completed Forty Days of Love at our church and in our small groups, so this is a good time to introduce you to my offering in this set. A Time to Love is Book 2 of my Seasons of Change series in the Under the Sun collection. If any of the characters sound familiar, that’s because they are…many of them first made an appearance in Book 1, A Time to Laugh.

As a treat for Inspy Romance readers, I’m giving you a first peek at A Time to Love’s cover (which I’ve just redesigned to include the handsome hero, Jordan), plus the blurb and first scene to read. I hope once the set releases you’ll take the time to enjoy some armchair travel to the small coastal town of Ballito Bay in South Africa, and then across the continent of Africa to the beautiful European city of Budapest, Hungry.

Furthermore, as soon as Snowflakes & Snuggles releases, I’ll gift a copy of the set to one lucky reader who leaves a comment on this blog. 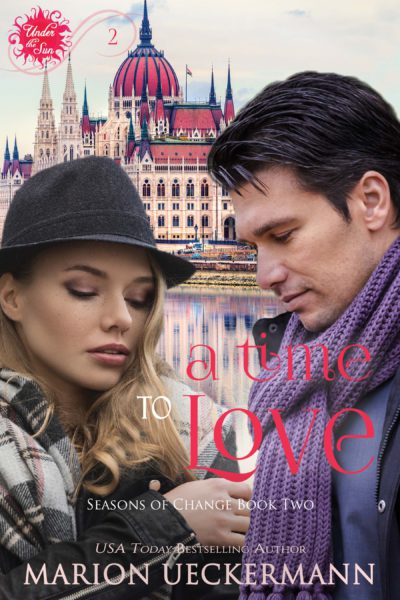 A TIME TO LOVE

Everyday life for Dr. Melanie Kerr had consisted of happy deliveries and bundles of joy…until her worst nightmare became reality. The first deaths in her OR during an emergency C-section. Both mother and child, one month before Christmas. About to perform her first Caesarean since the tragedy, Melanie loses her nerve and flees the OR. She packs her bags and catches a flight to Budapest. Perhaps time spent in the city her lost patient hailed from, can help her find the healing and peace she desperately needs to be a good doctor again.

Since the filming of Jordan’s Journeys‘ hit TV serial “Life Begins at Sixty” ended earlier in the year, journalist and TV host Jordan Stanson has gone from one assignment to the next. But before he can take a break, he has a final episode to film—Zac’s First Christmas. Not only is he looking forward to relaxing at his parents’ seaside home, he can’t wait to see his godchild, Zac, the baby born to the aging Dunhams. His boss, however, has squeezed in another documentary for him to complete before Christmas—uncovering the tragedy surrounding the doctor the country came to love on his show, the beautiful Dr. Kerr.

In order to chronicle her journey through grief and failure, Jordan has no choice but to get close to this woman. Something he has both tried and failed at in the past. He hopes through this assignment, he’ll be able to help her realize the tragedy wasn’t her fault. But even in a city so far away from home, work once again becomes the major catalyst to hinder romance between Jordan and Melanie.

That, and a thing called honesty.

YOU CAN do this. You’ve done it a thousand times before.

The scalpel blade glinted in the harsh light from the overhead surgical lamp. Dr. Melanie Kerr tightened her latex-gloved fingers around the steel handle, hoping none of the OR staff noticed her hand trembling.

She breathed in deep and raised her gaze to the swollen belly. Once she made the incision, there’d be no backing out, no going back. Not without risking a similar outcome to the last time she’d peered into a pregnant woman’s womb.

“How are you doing, Sandra?” she asked over the blue curtain separating her from her patient.

Her husband, Dan, shifted his attention from Melanie back to his wife. “You’re doing great, honey. Not long now.”

Not long. Melanie swallowed the lump that had once again risen in her throat. This was her first C-section since—

She forced her thoughts away from the memories of that fateful night twelve days ago. Perspiration tickled her forehead as the moisture obeyed gravity. Resisting the urge to wipe away the sweat with her arm, her eyes flicked toward the nurse standing beside her.

Swift to assist, the woman lifted a gauze pad with a pair of surgical forceps and dabbed Melanie’s forehead.

“Thank you.” Melanie offered a smile to her team, not that anyone could see it through the mask covering her face. Probably just as well. Who could have confidence in a doctor about to perform surgery with such a wobbly expression?

She moved the scalpel closer to her patient’s stomach, the skin stretched and taut. The quiver in her hand increased.

“Dr. Kerr? Is everything all right?” Clean gauze swept across Melanie’s brow. If only the nurse could mop up her anxiety as easily as she did her sweat.

“I—” Melanie took a step back. I can’t do this. I thought I could. I thought I was ready. But I’m not. And I have no idea when I’ll ever be ready.

She shifted her gaze to her colleague. Thank heavens she’d asked him to assist. “Dr. Humphries, I need you to take over.” She handed the scalpel to him and turned away, her first steps toward the door slow, unsteady. And then she didn’t care as she dashed the rest of the way, “I’m sorry” trailing her until she burst out of the operating room. She yanked the surgical cap from her head. The mask covering her mouth followed next, and then the gown wrapped around her body. She dumped the protective clothing into the laundry bin. Grabbing the latex gloves at her wrists, she tugged them from her hands then threw them into the biohazard bin before rushing out into the wide corridor outside the OR.

She had to get away. And not just from the hospital. She had to escape her life and the nightmare. She had to find healing and peace before she set foot inside a delivery room again.

If you’d like to receive information on new releases, cover reveals, and writing news, please sign up for my newsletter. My novella, Spring’s Promise, will be sent free to new subscribers.