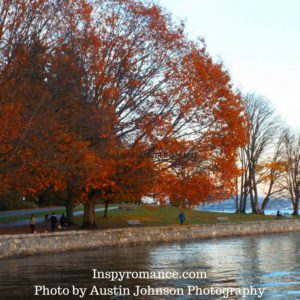 Fall is my favorite time of year. I love the colors of the season, the scent in the air, and the expectancy of the holidays. Thanksgiving in America is a pretty big holiday and one of my favorites. I will be hosting a crew of ten or eleven at my house. I’m so excited that both of my boys will be home this year. I plan to go all out. :) 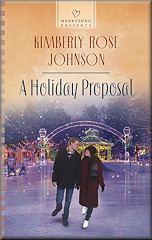 Since this is a blog about contemporary Christian romance, I thought it’d be fun to take a trip down memory lane and tell you about one of my first books ever published. The cover is Christmasy but it is more of a Thanksgiving book.

Just out of nursing school, Holly can’t risk any distractions. She knows a slipup could cost a life. Like the mistake she made years ago that still plagues her conscience. When she runs into old high school friend Matthew Cook, she hesitates to let romance into her life. Even if the handsome baker is as delectable as his fabulous pastries.

She didn’t notice him back in high school, but things have sure changed. Now that Matthew has Holly’s attention, maybe the holiday season is the perfect time for him to show her that she deserves to have it all—work, family, friends and a love that lasts a lifetime.

Here is a peak inside.

Matthew Cook’s breath crystallized in the cold mountain air as he stepped onto the wooden porch of his house to greet his sister and three-year-old niece. Winter had come early in Leavenworth, Washington. Snow had yet to fall, but the thermometer had dropped twenty degrees overnight.

April pulled her daughter Ava from her car seat, and set her on the driveway. “Hey there, little brother. Long time, no see.”

Matthew gripped the railing tightly as he stepped down the icy wood stairs. He should’ve thrown some sand on the slick steps. “How was your drive?”

“Stephens Pass was clear and traffic was light, so no complaints.”

He pulled her into a bear hug. After releasing her he squatted down to his niece’s level. “Hi, princess. Can Uncle Matthew have a hug?”

Ava looked up at her mother.

Ava gave him a quick, shy hug then slipped her hand into April’s.

“She’s going through a phase,” his sister explained quietly. “Don’t be offended. Once she warms up to you, you’ll wish she thought you were a stranger.” She grinned, walked to the back of her Subaru Forester and opened the trunk.

“Think you got everything?” Matthew teased. “Looks like you brought the whole house.”

“If it would’ve fit, I may have. Two months is a long time to have to pack for a three-year-old. Now help me bring all this stuff inside and stop griping.” She grinned and playfully nudged him.

“Bossy, bossy.” Matthew reached for the top bag. “I’ll take care of everything. How about you and Ava go inside and warm up.” He slipped a backpack over one shoulder and lifted their suitcases. April and Ava climbed the steps side by side. It’d be nice to have at least part of his family here over the holidays. “Be careful on the stairs, they’re—”

Little Ava squealed as her foot skidded off the step. April reached out to steady her on the slippery surface leading to his front porch. Arms flailed and bodies tumbled.

Matthew rushed forward to help, but before he took two strides April and Ava were in a heap at the bottom of the stairs. He dropped the luggage then knelt beside them. April’s shoulder jutted out at an unnatural angle, and she groaned.

Tears flooded Ava’s eyes, and she began to wail. April just lay there, not seeming to notice her hysterical daughter. “It’s okay, Ava,” he said. The child looked uninjured by the fall. He picked her up and held her close until she calmed.

Her little body shuddered. “Mommy?” She leaned toward April who still lay on the cold concrete in a daze.

“We need to take Mommy to the doctor. Let’s get you back in the car.”

“Yes. But the doctor will make her all better.” He put Ava into her car seat and stared at the straps. Now what?

Ava slipped her arms behind the shoulder straps and clicked a plastic thing at her chest.

He spotted what looked like a seat belt. With fumbling fingers, he attempted to snap it in place. After several misses, it finally clicked, securing his niece. “I’m going to get your mom now.”

Matthew grinned. No one called him Matt, but coming from this blue-eyed little cutie with dark blond curls framing her sweet face, he didn’t mind. He rushed to his sister’s side.

I hope you enjoyed the snippet. I don’t want to give the story away, but I will say the main characters in this book had a very memorable Thanksgiving.

I will never forget the Thanksgiving my parents took/dragged my sister and I away from Thanksgiving at our grandparents house to go to Montana. We arrived very late at night, or maybe it was the wee hours of the morning and we were staying in a church basement–I have no idea why.

That morning my mom freaked out when she realized the church had a pre-school and little kids could be walking in on us at any moment. We rushed to get everything tidied up and then she realized it was closed since it was the day after Thanksgiving.

I don’t remember much else about that trip except that it was super cold.

How about you? Do you have a special memory related to Thanksgiving, or this time of year?