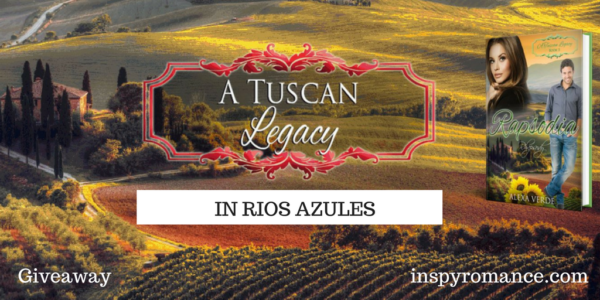 We’ve traveled to Tuscany a lot at Inspy Romance lately with A Tuscan Legacy series, but why break tradition of giveaways and excerpts? Besides, I’m thrilled to share my contribution to the series with readers. As I feel at home at Inspy, I’d love for you to help me celebrate my new release, Rapsodia.

Rapsodia is a story about faith, love, surrender, heartbreak, risk, trust, friendship, and so much more! You’ll see below the hero’s motto. What would be your motto in life? What is your dream?

Rapsodia is currently only 99 cents (free with Kindle Unlimited). By the way, today is the last day Book 1 in the series, That’s Amore by Marion Ueckermann, is still at $0.99, and the price for Book 2, Luna Rosa by Elizabeth Maddrey, will increase soon, too!

Giveaway! One randomly chosen commenter to this post will receive Kindle copies of entire Rios Azules Christmas series (3 full-length novels: Season of Miracles, Season of Joy, and Season of Hope). Ebooks will be gifted via BookFunnel. Giveaway is open until 9 p.m. on May 10th. 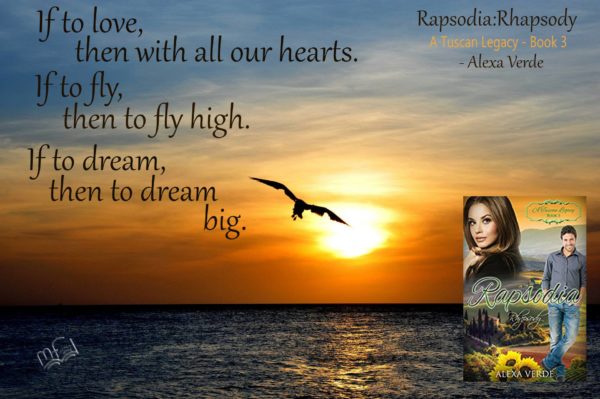 Without further ado, the excerpt. I hope you’ll enjoy reading it!

The plane moved, jerked forward, and shook somewhat. Marco’s grip on the armrest tightened to the point his knuckles went white. This was torture.

Samantha leaned a little closer to him. “Flying never gets old for me. The feeling of being in the air, the freedom, the excitement.” Her voice did ring with excitement. Incredible. “I love flying.”

That made exactly one of them.

The plane tore off the ground, and the pressure in his ears increased.

Samantha placed a piece of gum in her mouth, adding a minty scent to the pine needles one. She handed the pack to him. “Would you like one?”

For a moment, he forgot about takeoff. He sure hoped it wasn’t a hint that his breath was foul.

“Chewing gum helps so your ears don’t get plugged from the change in the air pressure.” She gave him a half smile.

“Thanks.” He took the gum, opened the wrapper, and popped the white stick into his mouth. He chewed in earnest, enjoying its fresh taste.

Samantha had a point. They were airborne, but the pressure in his ears wasn’t nearly as bad as usual.

The airplane bell dinged. They could unbuckle their seat belts.

“So, you like to control a situation?” The same half smile appeared on her lips as she clicked her seat belt open.

Marco nodded. He did, though at the same time, he encouraged his employees to take initiative to a point and awarded innovation. Why was it so easy for him to move millions of dollars but so difficult to trust the pilot to guide the airplane?

The old man near him started snoring underneath the newspaper. Most likely, he’d sleep through the entire flight.

“What about you?” Marco studied Samantha.

Her eyes darkened. “I learned the hard way I couldn’t control anything.”

Marco tensed at the pain in her eyes.

Something had happened to her. Something very, very bad.

Silence lingered until he asked, “Are you from Texas?”

“My accent gave me away? I’m from Rios Azules, a small town in south Texas. I went to college in Austin and then stayed there for a while. I moved back to Rios Azules almost a year ago because my mother wanted me to.”

A small-town girl. Her clothes were simple, her conversation unpretentious, and she didn’t wear a speck of makeup. He liked that.

But it didn’t make any sense to become attracted to someone who lived half a state away from him. And Texas was a very large state. Besides, he lived and breathed his job, and romance wasn’t on his personal menu. His life was guided by logic and smart decisions, not feelings, and that was what had gotten him this far.

Samantha continued, “Mom wanted me to move back to Rios Azules after I got hurt and… my wedding didn’t happen.” 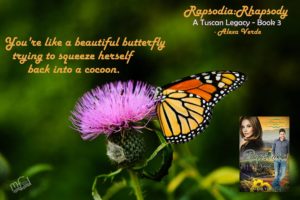 Marco frowned. It shocked and angered him that her fiancé had broken off the engagement because she’d gotten hurt. “I’m sorry to hear that.”

He said, “I’m not married, either. Not planning to.”

“I see. Is Houston your final destination?”

He shook his head. “No. I live in San Antonio.”

“Such a beautiful city… What kind of music do you like?”

“Classical. I play piano. Not professionally.”

Her face brightened. “I like classical music, too. I used to play violin. My dad taught me.”

Huh. Classical music wasn’t a popular choice these days. “Used to play violin?” He picked up on her use of the past tense. She probably didn’t have time for the violin anymore, like he didn’t for piano. He hadn’t played in years. But he’d love to play something for her someday. Maybe a rhapsody.

Whoa. He was getting ahead of himself.

“Yes. Used to. I… can’t anymore.” She looked away. “What kind of movies do you like?” she asked as if trying to change the topic.

“Me, too. Favorite food? Mine is pizza and beef lasagna.”

He perked up. “Wow. You just read my mind.” Samantha was totally his kind of girl.

The talk about food made his mouth water and caused him to remember the favorite scents of his childhood. Marinara sauce, herbs, breadsticks…

As if on cue, the scents of broiled chicken and spaghetti sauce drifted to him.

Soon a female flight attendant stopped near them. “What would you like? We have chicken and pasta.”

He opted for pasta while Samantha chose chicken. He touched his neighbor’s elbow on the left to wake him for dinner, but the man only snored louder.

Samantha bowed her head, and her lips were moving, as if she was saying something in her mind. Was she praying?

Marco’s heart warmed up at the sign of her being a Christian.

He whispered a prayer of his own. “Dear Lord, thank You for this food we’re about to eat and please bless it. Please make this trip safe and keep us safe in Your care. Thank You for all Your blessings. Amen.”

He tried his food. The pasta tasted rubbery, and the watered-down sauce was a far cry from the deliciousness he was used to. But the salad was fresh, and the small chocolate dessert tasted sweet and soft. Samantha’s chicken didn’t look too appetizing, either, but she was devouring it with gusto.

Flushing down his meal with orange juice, he imagined sharing dinner with Samantha, made from one of his family recipes, on the terrace, with a breeze playing with Samantha’s hair, her eyes sparkling in the candlelight…

He got carried away. He’d never see her again after this flight. The thought made the sweet taste of orange juice turn bitter in his mouth. Once the initial ice in her eyes had melted, she seemed to be genuine, lovely, and friendly.

However, she did have an aura of sadness around her, and he wondered what her story was.

“How is your food?” he asked Samantha.

“Okay. I’ve seen people existing on a small bowl of rice a day, if that much. I learned to appreciate any kind of food. This is not bad.” She put another piece of chicken in her mouth.

She seemed to swallow the piece, but suddenly her eyes widened, and she started coughing profusely. It looked like something had gotten stuck in her windpipe.

Eyes watering, she clutched her hands to her throat, as if unable to say a word, showing him the universal sign of choking.

Cold ran down his spine.

“Samantha, are you choking?”