Behind the Story of “To Protect & Serve” 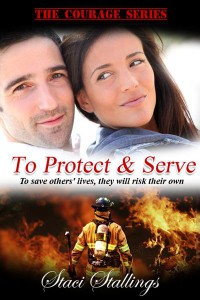 It always amazes me how there is a story and then the stories that happen while I’m writing the stories. Oftentimes I learn as much from one as from the other.  That was certainly true of “To Protect & Serve.”

Now first of all, you have to know that writing about firefighting was WAY out of my comfort zone.  Ovens scare me.  Fire terrifies me. In fact, I didn’t light a match until I was married, and once I nearly burned my church down trying to get a small candle lit.  So this is not a story I would ever have envisioned me being called to write.

Second of all, this story was not my idea.  You see, I was writing a different story, and when I write, I find people who look like my characters (often celebrities) and I print off pictures of them. I also make a soundtrack of music for each book that I write.  Well this particular book featured a guy from a 90’s boy band that I liked at the time.  And I was happily writing that story when a friend who had taken a deep interest in my stories and how I write them happened to be talking with me about my new story.

I showed her the footage I had of the group and the pictures…. and she proceeded to “fall in love” with one of the other guys in the band.  No matter what I did from that point on, she was like, “That’s nice.  When are you going to write this other guy’s story?”  UGH!  She kept it up so long that one day as I was driving to get my kids from school, I said, “Well, God, if I was going to write this other guy’s story, what would it be?”

And God literally dumped the whole story on top of me.

Now that’s weird.  Most of the time He gives me bits and pieces, and I have to do a lot of trusting along the way that He knows where we’re going with this because I have no clue.  Not with this one.  It came almost fully formed.

My first obstacle was the firefighting thing.  So when I got home and started writing “To Protect & Serve,” I realized I was going to have to do some actual-actual research because I knew NOTHING about fighting fires.  One day on the way home from somewhere, I drove by our local volunteer fire department station house, and on a complete whim, I turned in there.  Not usually an out-going person, I went in, introduced myself, told them I was an author and I was writing a story about firemen and could they answer a few questions.

Within 20 minutes I had five firemen (I know… I have a rough job! :) following me around, showing me the trucks and the ladders and all of the equipment, the suits, the boots, the gear.  It was an interesting hour and a half!

Then I went home and the story just came tumbling out.  However, there was another obstacle.  The main character, Jeff, was like a turtle when it came to talking with his love interest, Lisa about his job.  This frustrated her and me!

All of this occurred prior to 9-11.  When that tragedy happened, it took me quite a while to start writing again, and one of the Bible verses that started showing up was John 15:4 “Abide in Me and I in you.” I was beginning to learn deeply just what that meant–that I was to trust God even when I couldn’t clearly see where any of this was going.

So I wrote the story that came to me whether I understood it or not–including Jeff’s frustrating habit of shutting down when asked about his work.

About four months later, the post office changed our address for no apparent reason and flatly refused to deliver things with the old address on them.  So I stopped getting magazine subscriptions.  I had tried to get the address changed on my subscription for Time, but it was not working.

Then, one day I went to the mailbox, and here was my magazine–with the old address on it, in the mailbox they had refused to deliver to.  It was the Man of the Year issue featuring Rudy Giuliani.  In that issue was a picture of a firefighter taken in the stairwell during 9-11 and accompanying that picture was an article about this fireman’s wife.  In it, she talked about how the firemen don’t talk about work with the wives and how hard that can be.

Right then, I fully understood “Abide in Me and I in you” because I had written a fully-developed character just from what God had given me that perfectly fit what a character like him might be like–and I didn’t know it until after the fact!

God is so cool!  And abiding in Him is more amazing than I could ever put in to words!