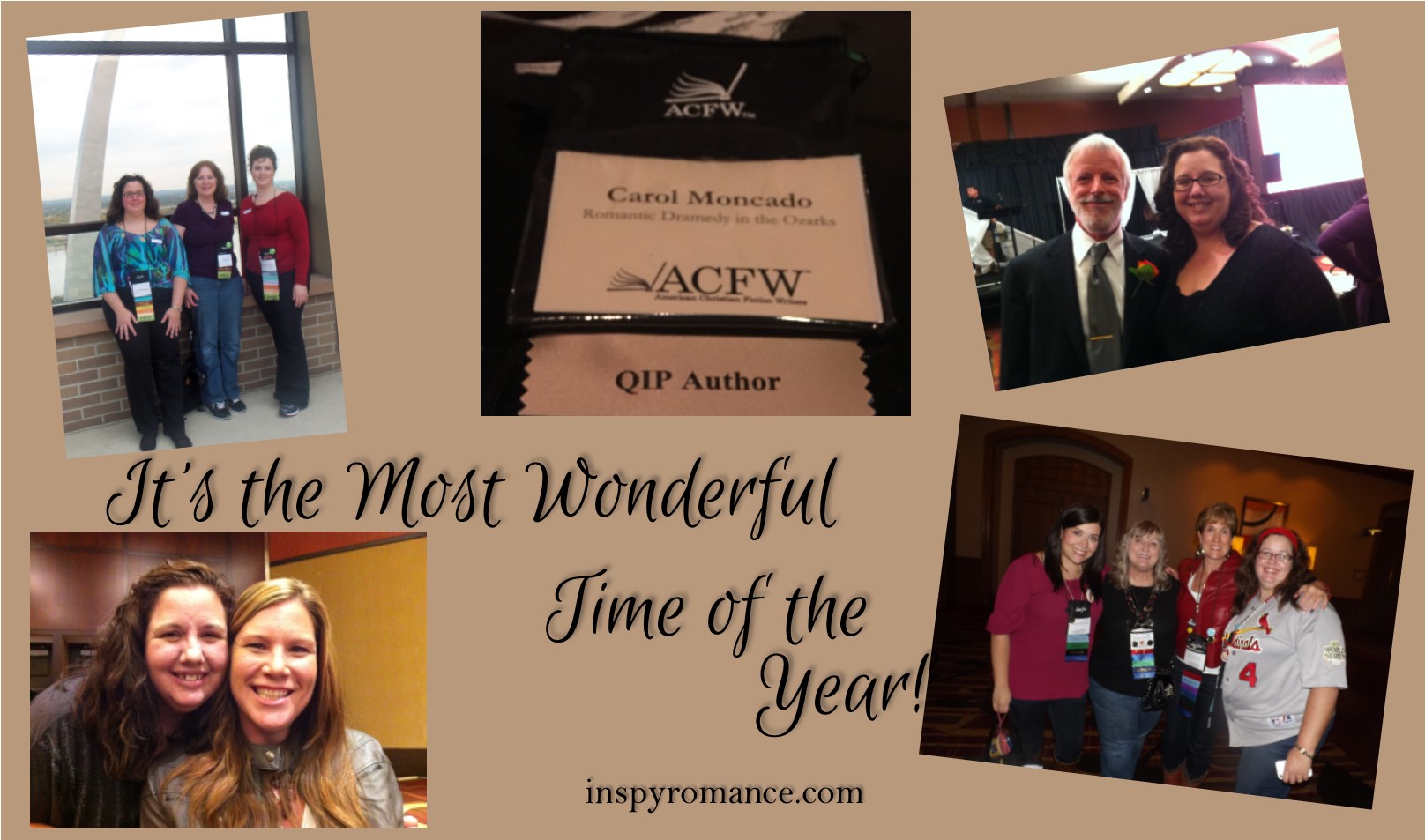 Yeah. Yeah. Yeah. I know. Technically the most wonderful time of the year isn’t for a couple more months, but for many of your favorite Christian authors, next week is close.

Me and roomie Jen Cvelbar

It’s time for the American Christian Fiction Writers annual conference. Six hundred or so published and aspiring authors descend on a venue (in this case, the Gaylord in Grapevine, Texas) for 3 days of learning, pitching projects to editors and agents, networking, and all around camaraderie. There’s something incredible about being with people who Get. Me. Who know that the voices in my head don’t mean I’m crazy ;). (Here’s my recap from a couple years ago.)

I’ll be attending a five hour long course by Allen Arnold about “Using Chaos as your Canvas” and oh boy do I need that right now! I’ll attend shorter workshops on settings, writing in layers, making a career out of writing novels, and I’ll be hostess for a session on indie publishing. 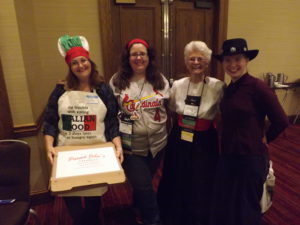 There’s the genre dinner where some people will dress up in costume from the era they write, etc. I’ll probably go as a frazzled writer :). At the zone breakfast, I’ll sit with other writers from Missouri, Kansas, Iowa, and Nebraska. One year, I sat between Mary Connealy and Julie Lessman!!! AH! I was so excited! But I’d taken my medication too early and it gives me an upset stomach if I don’t eat with it :p. Another year, I sat with Deb Raney and Jocelyn Green.

Saturday night is the Gala. Everyone dresses up and the Genesis (unpublished) and Carol (published, no relation ;)) Awards are given out. Usually there’s a live stream. If you have some time to turn on YouTube while you’re sitting around doing something else, you can watch last year’s. The last award acceptance speech by Linda Brooks Davis is hysterical! You can stream it here.

But there’s something so incredible about standing in a ball room with 600 others, the ones who get me, and worshiping the Most High together. It never fails. I cry during the first praise and worship session every time. 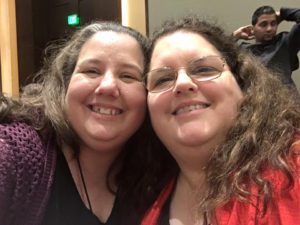 This year, I’m headed down early. I leave Monday and will drive about halfway. Tuesday, I’ll head for either Dallas or Tyler, depending. I have cousins who were displaced after the floods in Baton Rouge last year. They’ve resettled in Tyler, but one – who is bed/wheelchair ridden from spina bifida – is having surgery sometime soon. I’ll go wherever they are to spend a few hours together. When you’re that close, you almost have to! My roommate and dear friend Jen Cvelbar (writing as Jennifer A. Davids) flies in Tuesday evening. I’ll pick her up and she’s indulging my desire to go to Tom+Chee for dinner then IKEA on Wednesday (hey! We don’t have either around here!). Wednesday, we’ll go to the conference hotel. I’m meeting with my agent. Thursday, conference begins in the afternoon. We have lunches and dinners and breakfasts scheduled with friends and our critique group as well.

Me, Julie Lessman, Becky Wade, & Casey Herringshaw – we took this picture AT LEAST a dozen times… this was the best one ;).

It is one of the highlights of my year, and I know that holds true for many others as well.

As for that writing in chaos thing? My goal was to have the first draft of the next Crowns & Courtships done before I leave, but that will take a miracle. Life has been fairly chaotic the last few weeks and the words haven’t flowed easily at all. I’m having a huge sale starting tomorrow and lasting a week. I’d hoped to have it up for preorder as a part of that, but I’m not sure it’s going to happen :/. I’d appreciate your prayers for the words to come.

I’ll work some while I’m gone, especially Monday night, but mostly I’ll enjoy the squeals and hugs from people I only see once a year, holding on tight for what seems like an eternity, because it won’t be enough. It never is.

But, for me, it is the most wonderful week of the year ;).

In fact, I wrote about it in Finding Mr. Write. My debut offering is partially set at a writers’ conference based on ACFW’s. It’s always free for your Kindle. If you’haven’t snagged it yet. you can here.

If you could join us and meet your favorite Christian author, who would it be? Is there an event you look forward to every year?

Here’s the deets on the sale – all books are on Amazon and can be found at bit.ly/moncado.

The title and cover for Crowns & Courtships 2 hasn’t been revealed yet! My Facebook group will be the first to see it! I’d love to see you over there if you’re not already!