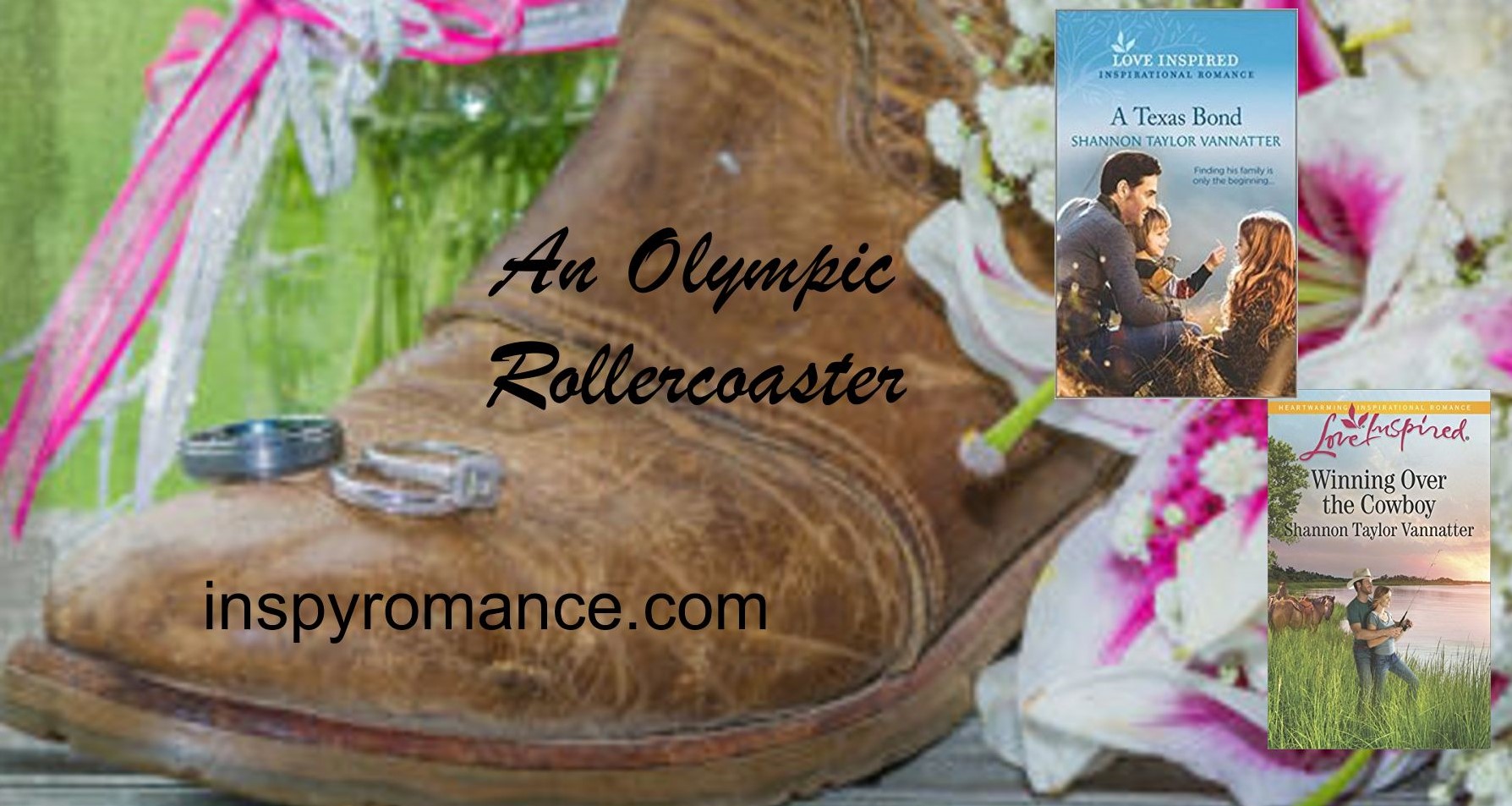 When I was kid, the Olympics bugged me. They took my shows off TV for two weeks. The nerve. And I’ve never liked sports. Until the summer of 1984. Newly married, I was a hairdresser with a beauty shop at my house. My husband worked days and half the night as a dental technician, then slept much of the day. My business was new. Often I had a few retired clients early in the morning and nothing else until school let out and people got off work. The days were long and there was nothing on TV. Except the Olympics. 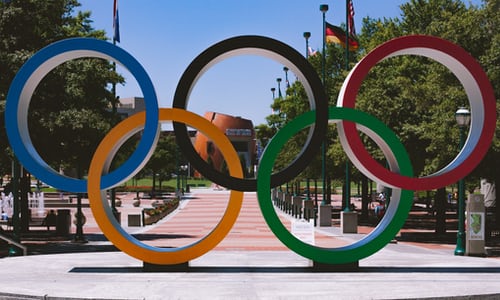 It was Carl Lewis who sucked me in. He was American. And fast. I cheered him on. Soon, I heard the stories of other athletes and watched them compete. I became a fan as I cheered Mary Lou Retton and Edwin Moses on. I hated that I’d missed the Winter Olympics that year. And then I waited, for four long years. Since then, I’ve watched the Summer and Winter events every single year. I rejoiced in 1994, when they split up Summer and Winter, so I only have two years to wait instead of four.

Over the years, I’ve cheered on Michael Johnson and his gold shoes, Bonnie Blair, Dan Jansen, Flo Jo, Apollo Ono, Michael Phelps, Shaun White, Peekaboo Street, Mikela Shiffrin, Elana Meyers Taylor, Paul and Morgan Hamm, Charlie White and Meryl Davis along with various others. I watched the Nancy and Tonya drama play out, then saw a young Russian skate away with the Gold. I’ve even rooted for a few not Americans. Elvis Strojko, wow could that guy skate and Minute Bol, because he was SO fast. Who could forget Laura Wilkinson, who said, “I can do all things through Christ who strengthens me” after winning her Gold medal?

My winter favorites are figure and speed skating, bobsled, skeleton, luge, freestyle and downhill skiing. Snowboarding is growing on me. In summer, I love track and field, swimming, and gymnastics. I still don’t like sports, with the exception of when my son was playing, but I love the Olympics. It’s the patriotism, the 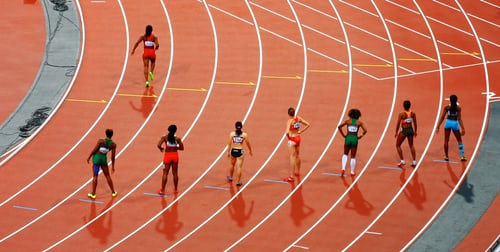 athletes’ stories, the people behind the sports. It’s the only time I ever watch sports on TV or period since my son is grown. I’ve often said it fascinates me for an athlete to spend their entire life training for the Olympics, because I can’t imagine being that committed to a sport.

But I am that committed to writing. Unlike many of the brave souls on this blog, I don’t have the skillset to publish my own books. I’m severely technically challenged. So, I spent 9 1/2 years and received over 200 rejection letters trying to get published. I feel an affinity with Olympic athletes, as I do with contestants on singing shows. I’ve been there, so to speak. During those years of striving for publication, I’d get a rejection letter and I was crying on the track after a fall like Mary Decker. But then a kind editor took the time to tell me something I’d done right and encourage me, sending me soaring into a triple toe loop like Oksana Baiul. I signed with my first agent who saw promise in me and I was backflipping and landing with my feet on the ice with Scott Hamilton. Six months later, the agent realized I needed more help than she could give, I stumbled and nosedived in the snow with Lindsey Jacobellis. I finaled in a writing contest and soared to the win with Tommy Moe on the downhill ski run.

I met my first editor at a conference and got a request for my full manuscript and did a Johnny Moseley iron cross trick. 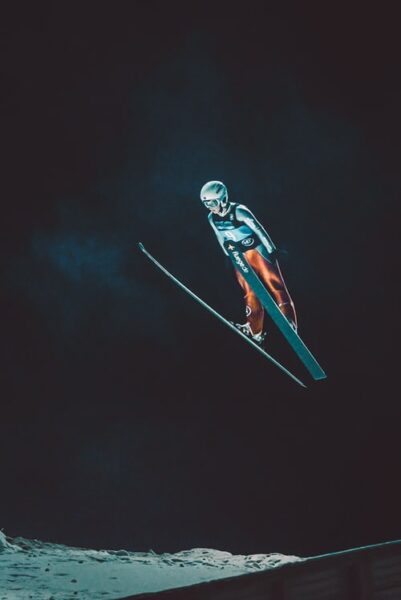 Six months later, the rejection came and I busted it on the balance beam with Dominique Moceanu. I got two offers from publishing companies, signed with my second agent, and did a double twist vault with Gabby Douglas. We decided on which publisher to go with, then lost the contract, because unbeknownst to me, my agent had a bad rep in the industry. I fell and cut my femoral artery on my skate with J. R. Celski.

You get the picture. After that, I fired my agent. She went out of business and the other publisher was still willing to give me a contract. But once I got that first contract, it still hasn’t been smooth sailing. My publisher went out of business. Twice. I got brave enough to sign with a new agent. A good one. My editor left–four different ones. My friend bought a publishing company and I signed on as an editor. I decided I wanted to write for the company. I didn’t need an agent for that, but my contract with my agent was all-inclusive. We went our separate ways, so I’m currently agentless. I still get rejections. And these days I give them.

But I still love to write. The fire still burns in me, characters still whirl in my head, and stories come out of nowhere. Just like Olympians, artists, musicians, or anyone else with a passion that drives them. And through it all–the soaring heights and painful falls–God has been there. I know in my bones that every good thing, every scrap of encouragement, and every success was orchestrated by him. My must be weary by now, ever-supportive husband has my back too. So, as I continue to wait–hoping to sign with my fourth agent, nab a three-book contract, and sell my long-length novel that’s been languishing in my computer for at least ten years–I’ll keep striving. Either way, I have a plan to get where I want to go. I’ll keep doing triple axels and double backflips. Until God tells me to stop.

Just like the Olympians–only I guess unless they’re Christians–their bodies tell them to stop.

By the way, I’ve read 4 books this year. Well on my goal to 20 for the year. And several jigsaws.

All comments also go into the drawings for our birthday bash. This year, I was up to my eyeballs editing when the busy bees at Inspy Romance were organizing things. I got the e-mail, but by the time I came up for air, the deadline had passed. I apologize to our readers and the other authors for not participating. But there are lots of great books to be had, so be sure and check it out: https://www.inspyromance.com/happy-8th-birthday-inspy-romance/