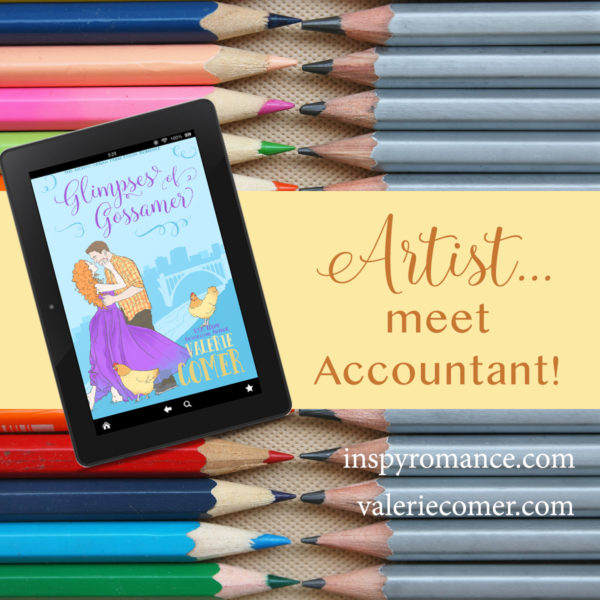 Come on, admit it. You read the title of this post and immediately thought, “oh, that’s opposites attract.”

Tropes form the backbone of many a romance novel. They form a kind of shorthand as we talk about stories with our friends. Like this…

You to friend: “Hey, I know you love marriage-of-convenience stories. Have you read that one by Valerie Comer, The Cowboy’s Convenient Marriage?”

Friend A: “I read this great friends-to-more romance the other day.”

Friend B: “Oh, I don’t like those. They’re so unbelievable.”

Friend A: “No, really, I think you’d like this one because…”

But opposites attract? There’s built-in conflict, and that’s fun for everyone! Well, everyone except the couple in question, most likely.

Now, Alex is the guy you love to hate. He’s a long-term thinker who sets goals, makes plans, and then doggedly pursues them. He scrimped and saved for a down-payment on an older home before he turned twenty-five. Then he rented out the basement suite as well as the two extra bedrooms to help with payments. Oh, and he’s an accountant.

That kind of guy.

I did the only thing I could think of, and that was move a crazy chicken lady artist next door… and watch the sparks fly.

Alex comes from a large, noisy, close-knit Italian family. The little bit of family Marley Montgomery has is totally dysfunctional.

Alex is strong in his faith. Marley thinks God is out to get her.

Alex is gunning for that corner office before he turns thirty. Marley is thrilled to have a part-time job to cover her chicken feed.

Alex’s backyard, with its manicured raised beds, is a pristine testament to his cousin’s urban farming business. Marley’s is a mass of untamed wildflowers and weeds that just might be herbs. She’ll figure it out sometime… maybe… probably.

At one point in the story, Marley begins to wonder…

What would her dream guy be like? Would he be more like her, ragtag with a broken past and no post-secondary education? If she were fantasizing already, she might as well dream bigger. Better. A cute guy with a solid work ethic, a good job, and a close extended family.

Yeah, no. He was her polar opposite. But might that not be a good thing? Because heaven help the household where there were two adults as flaky as she was.

As always, I’ve tried to make Glimpses of Gossamer accessible to readers new to the Urban Farm Fresh Romance series. Yes, it’s Book 8, but not all the previous characters show up, and any key relationships and backstory are clarified as needed within this story. Having said that, I hope you’ll want to read the previous stories if you haven’t already!

Besides “opposites attract,” what is Glimpses of Gossamer about?

Love… as strong as steel, yet as fragile as gossamer. 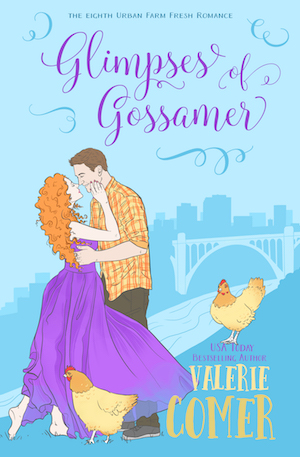 Artist Marley Montgomery finally thrives in her inherited rundown cottage with its overgrown yard, but there are rules about how many rescue chickens fit on her urban lot. Too bad the cute but uptight accountant next door is friends with the animal control officer.

Alex Santoro prefers things orderly and by-the-book, but his waif-like new neighbor offers a glimpse into a simpler lifestyle that is surprisingly intriguing. Maybe it’s the whimsical art she creates. Maybe it’s the wild beauty emerging in her unkempt yard. Or maybe Alex is simply falling in love with a pretty girl who’s unlike anyone he’s ever known.

How can Marley trust her secrets and fragile wings to the man who has everything?

Click to pre-order on Amazon today, or stick a reminder on your calendar app to borrow via Kindle Unlimited on February 11! It’s currently $2.99 US, a savings of 25% over the post-release price.

Now it’s your turn. What is the way you and your significant other are most dissimilar (besides gender)? Or, what is the most vivid set of “opposites” you’ve seen in an Inspy Romance novel?

Interested in reading Glimpses of Gossamer? I’m offering one reader a copy (e-book only, worldwide). If you’d like to put your name in the hat, please comment by Friday evening, January 10. Winner will be announced in the Sunday Edition, but the story will not be sent until early February, as it’s currently with my editor.