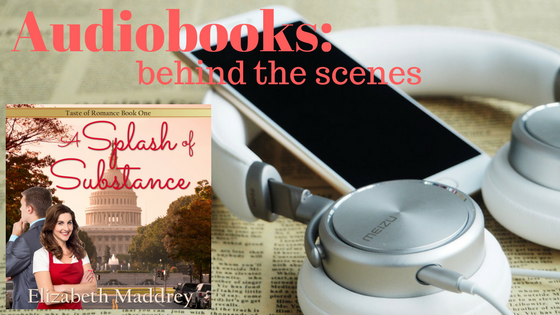 When I was first published (with a small press), my publisher was quick to put the Grant Us Grace series into audio in addition to e-book and paperback. I loved the fact that I had options for traditional readers and for the busy readers who met their book needs through audiobooks. But since I was with a publisher, I didn’t have a lot of insight into the process behind it.

One of my goals for 2017 is to get the rest of my books into audio. And so, at the start of the year, I logged into ACX — Amazon’s audiobook creation platform — and started poking around. I’ll admit that it was a little bit daunting, but I took a deep breath and claimed A Splash of Substance. From there, it was a relatively simple matter of filling out a form with basic details and setting up an audition script and opening it up for narrators to record their auditions for me to listen to.

The first time I got an email from ACX saying I had an audition waiting for me to listen to I might have squealed a little. (And I’m really not a squealer.) It took a few days and several different auditions and then I got an audition that made me pause. I listened to it again. And then a third time. And something just clicked. I liked the woman’s voice and I liked the way she voiced the characters in my audition script. So I sent her a message. After a little back and forth, a contract was made and the production of the audiobook for A Splash of Substance was underway.

I spent last week listening to the completed files and I can’t wait for people who enjoy listening to books to get a chance to hear A Splash of Substance! At this point, it’s winding its way through the ACX quality control process — but neither my narrator nor I anticipate any trouble, which means Splash should be up on Audible (and other places like iTunes) in the next two-ish weeks.

What’s even more fun is that Brenna (that’s the narrator) enjoyed the story and is excited about continuing to narrate the rest of the series. So plans (and a contract) are in place for A Pinch of Promise (estimated on-sale date mid-June). I love that the character voice acting will be consistent from book to book (well, minus a tweak or two that we’ve discussed that I think is going to make it stronger going forward.)

Once I got over the initial nerves about setting up a book and looking for a narrator, I have to say I’ve enjoyed this process and I’m looking forward to watching (listening?) as the rest of the Taste of Romance books (including the last book in the series that I’ll be publishing later this year) come to life.

Do you enjoy audiobooks? Have any things you love to see? Things that make you crazy when you’re listening?