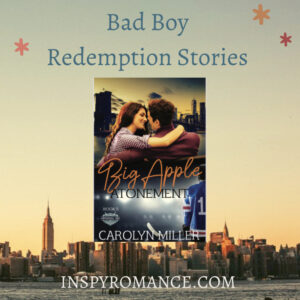 One of the things I LOVE about writing Christian fiction is being able to explore some of the challenges of life, to delve into some of the nitty gritty aspects of things like financial and family pressure, relationships and estrangement, physical and mental health issues, faith and fears. I love that we can read fictional accounts of real dramas, that we don’t have to actually live these experiences to be able to relate or gain sympathetic understanding for people who have undergone such things.

I’ve created a few bad boys over the years, and my Original Six series has one in Tyler (TJ) Woletsky. In Big Apple Atonement I loved presenting TJ’s perspective, and to show that he’s as human as you and me. (Okay, maybe he’s a little more human than you or I, but you know what I mean…)

Often a ‘bad boy’ is simply someone who is misunderstood, who acts a certain way as a coping mechanism for a past hurt or trauma. I didn’t want to create a caricature, so TJ is complex, and the way he’s regarded by Christians is also fairly human and relatable (I hope). For while Christians might be told to love everybody, there are some people who – let’s be honest – are more difficult to like. Let alone love.

So I’ve asked Tyler to share a little today about what it’s like to be considered a Bad Boy in Christian Fiction.

Take it away Tyler…

Tyler: Man, if I had a dollar for every time I was called a Bad Boy (eye roll). I get why Christians get called hypocrites. Those people might say they’re all about love, but actually bother to talk to you? Nope. They wouldn’t touch me with a ten-foot pole. And don’t get me started on trust. Like, how long is a man supposed to prove he’s changed before someone actually believes it? Gotta say, I get pretty tired of turning the other cheek. But I know as soon as I snap there’ll be all those people wanting to point their fingers at me, so I have to keep gritting my teeth, praying I don’t lose it, hoping they’ll finally see me with different eyes.

What do I wish people knew? That while I might kinda like acting up it’s literally only for a few seconds, then I feel even worse than before. Apparently I have issues with impulse control. (inserts another eye roll). I wish I was one of those calm guys. Mike Vaughan, Beau Nash and Dan Walton all seem pretty cool, calm and collected, and it’d be nice to be more like them. I don’t think anyone’s ever called me cool. Or collected.

To be honest, and this is being really honest, I don’t like myself too much. I’ve got too much baggage, seen too many things, done too many things I’m not proud of. I don’t understand why little kids seem to like me but I’ll take it. Maybe they’re too innocent to judge.

If people knew about my family and the secrets they’ve always tried to hide they might understand why I hate pretenders. I like to call it as it is. And sure, some people get offended by it, but that’s on them. If you don’t like it, then don’t lie. I hate liars. And hey, apparently God hates lies too, so looks like I’m in good company. With that, at least.

What do I wish I could change? Where do I start? Maybe with my real mom. Maybe having a dad who loves me. I wish I hadn’t hurt Nick Grenier. It’d be nice to not have Emma Moritello hate me. (Another of those Christians, can you tell?) I wish I hadn’t hurt Beau Nash either. I mean, I could’ve sworn I hadn’t touched him, but it wouldn’t matter because as far as everyone’s concerned I did it anyway. That’s what you get when you’re known as a bad boy. People love to hate you. And I already hate myself. Don’t they know all I really want is some love?

Aww. Poor TJ! Maybe you can give the man some love by checking out Big Apple Atonement, freshly released today. (Buy at Amazon, Kobo, Apple, B&N). Here’s a bit more about the story:

She’s the saint with a secret. He’s the sinner with a heart of gold.
For Emma Moritello, giving abandoned and rejected children a safe home is her life’s purpose, but pressures at work means her dream may be coming to a close. And just when she thought life couldn’t get more challenging, along comes hockey’s bad boy, keen to make amends. God might want her to love her enemies, but it doesn’t mean she has to like them. Especially this hockey enforcer, who has the nerve to try to stir her heart.
TJ Woletsky has never tried to hide his sins—his exploits are tabloid fodder, and hockey teams love to hate him. Including his own. When a trade takes him to New York he’s confronted with the repercussions of his past, and time spent with the unfortunate helps ignite his desire to turn his life around. Until an incident in a nightclub makes everyone question whether this sinner can ever really change.
This story of second chances is the fifth book in the Original Six Christian hockey romance series, a sweet and swoony, slightly sporty, Christian contemporary romance series from bestselling author Carolyn Miller.

What are some bad boys you’ve enjoyed reading about in Christian fiction? What qualities about them appeals / do not appeal? Do you enjoy reading redemption stories?

(Oh, and want a bargain? The first book in this series, The Breakup Project, is currently on sale for only 99c! Grab your copy today! Amazon, Kobo, Apple, GooglePlay)