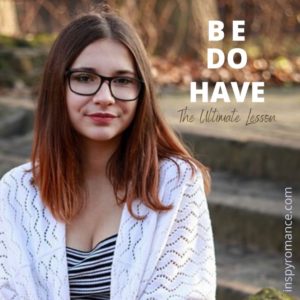 Many years ago I wrote an article for a blog called “Be Do Have.” It was about an insight I had recently had about life. In the article, I explained that most people in life get this backward. They believe that they need to have before they can do and they need to do before they can be.

So they think that getting something—say a new car will allow them to do the things they want to do, which in turn, will allow them to be happy. And too often, people get so trapped in this thinking that they will go into deep debt—financially, physically, spiritually, mentally, and emotionally—to get what they think is going to make them happy.

The problem is, it doesn’t work this way. If you are not happy and fulfilled, nothing out there is ever going to cause you to be that for very long. I have known people who work, work, work, work, work trying to have so they can be happy. Then, after many years, they realize they are still not happy. They might blame the job or the marriage or any one of countless external things for their unhappiness. But the reality is, they are unhappy because fundamentally, they are not at peace with themselves, God and others. Nothing outside themselves will ever fix this.

That’s the exact trap that so many of my characters find themselves in. Their solutions for it vary. One is pouring herself into a job that is grinding her down to a pulp. One is lost in a material world trying to buy herself out of the trap. One is super-bossy and is trying to get-to-the-top to assuage this underlying fear that comes with not being happy.

One of my characters caught in this trap, Rebecca Avery in A Work in Progress, has simply given up trying. At the outset of the book, she ruminates about the “beautiful people” as she calls them. To her, it’s simple. They are lucky and she is not. End of story.

Enter Eric Barnett who pretty much feels the same way about himself although he is one of the members of the “beautiful people” Rebecca is pining (and whining) about. However, Eric does not consider himself beautiful, smart, talented, or lucky. When he compares himself with the others in his group of friends (many of whom grew up together), he finds himself very much the ugly duckling of the bunch.

He is struggling in college, adrift in a sea of ambitious people who know what they want and how they are getting there. Then he meets Rebecca’s “beautiful people” roommate Holly, and he falls madly in love with her. Of course, Rebecca’s secret crush on Eric begins to crush Rebecca even further because he’s so crazy about Holly which confirms to Rebecca that if she could only be Holly, that would fix everything.

It might seem like a typical plot, but this story has one very important twist because woven into it is the be, do, have lesson. At first, both Rebecca and Eric try to have their way into being. He does everything he can to twist himself into knots to be the “right guy” for Holly because if he can have that relationship, then he will be happy.

What they eventually discover is that it is only in becoming who you were meant to be that you do the things that lead you there, and by doing so, you come to realize you have what you wanted all along—happiness, joy, and peace.

While only this book is called A Work in Progress, I think the reality of my books is that most if not all of them could have that title and it would fit. You see, I think we are all works in progress, and we are all learning every day the be, do, have lesson.  We are either learning that we have to be to do and have. Or we are learning that having doesn’t lead to the being we thought it would.

One of my favorite bad reviews on A Work in Progress showed me how inside-out and upside-down we often get it. The review said something along the lines of, “Rebecca’s parents obviously have money. Why do they not get her contacts, teach her to use make-up, buy her some nicer clothes, and pay for a better degree. Then maybe she would have some confidence.”

Hmmm… Something tells me that reviewer missed the point.

Do you have a favorite character who was a real “work in progress” who had to learn that the joy and peace were an inside job rather than an outside thing to strive for? Tell us about them. 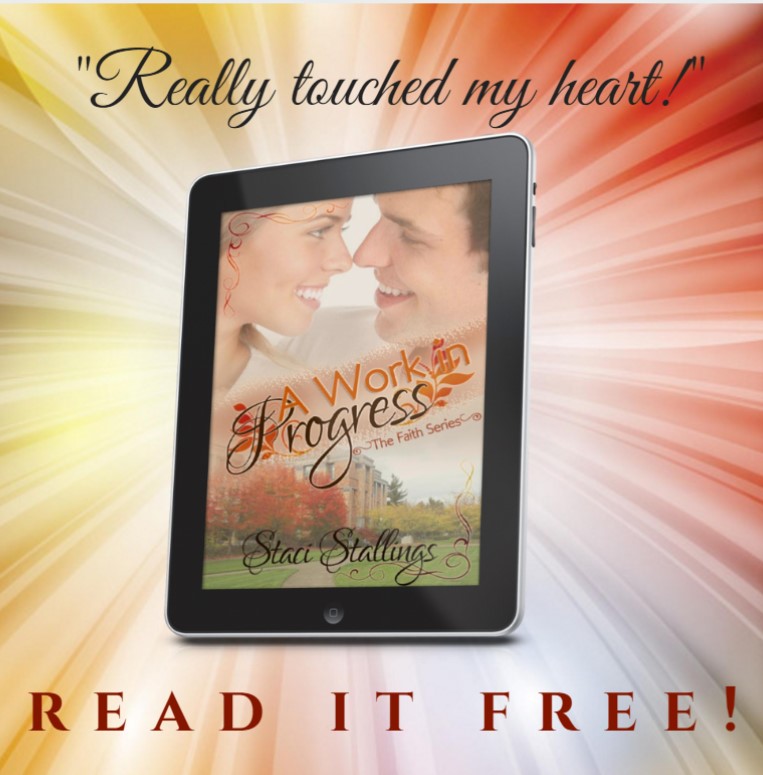