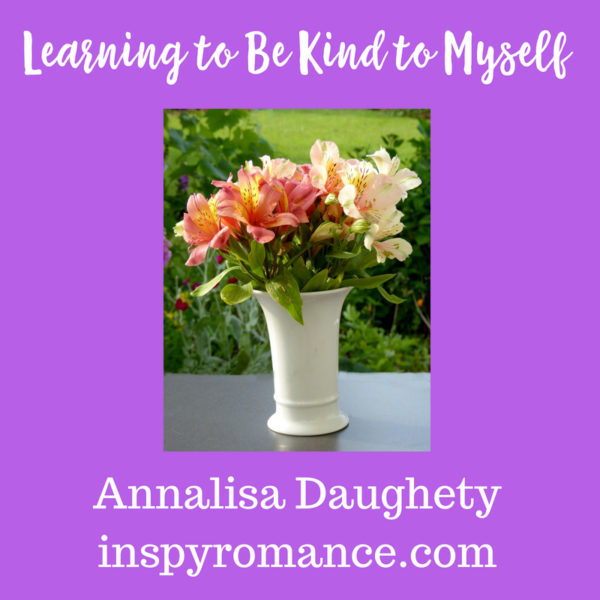 I’ve shared here before about some of the things I struggle with—in particular, juggling all of the moving parts of my life and trying to carve out time for my family. I’ve enjoyed the support I’ve received from each of you, and the tips on how to better do that.

And something else occurred to me recently that maybe some of you can identify with.

In my life, I’m my own worst critic. I’m far harder on myself than anyone else is. Can you relate? Often, I berate myself for making even a simple mistake (like forgetting to mail something for example) that I would have written off as “no big deal” if someone else had done it. When my husband comes home from the store without one item that was on the list, I don’t bat an eye. It’s not a problem. But if I do it, I get frustrated with myself.

I think I’ve spent so many years being a perfectionist that it’s hard to admit to myself and to others that I’m not perfect! But in fact, I’m far from it. I think the Instagram culture has only made it more difficult for those of us who already struggle with this. I look at some of the feeds of people I follow and they seriously look like photos straight out of a magazine. And sometimes I try to keep up with that.

But you know what? That’s not my real life. Sure, my life may have its “magazine” moments. But more often, it has lots of moments that I don’t usually share with people.

Like the other day—we were hosting a cookout on a Friday afternoon. I’d worked most of the day and so I found myself in a real time crunch—needing to get the house straightened, make a grocery store run, and start cooking all the stuff that wasn’t going on the grill.

I was making macaroni and cheese for the kids and salted caramel brownies for dessert—simultaneously. The macaroni was boiling on the stove and I had already mixed the brownie mix and put it in the pan. The next step was to put the caramel on top of the brownies before I popped them into the oven. I picked up the pouch, cut it open, and poured it ALL over my brownies. And I thought, “man, this caramel sure is ORANGE.”

You guessed it. I’d put the cheese from the mac and cheese all over the brownies.

I didn’t put that on my Instagram feed but you know what? I wish I had. Because that is authentic REAL LIFE. That is someone trying hard to do a lot of things at one time and making a mistake. Thankfully, I was able to just laugh about it. Although there would have been a time when I wouldn’t have found it funny! I scooped all that cheese off the top of those brownies (well, as much as I could because let’s face it, a little cheese never hurt anyone!), added the actual caramel, and cooked them.

The mac and cheese was a lost cause sans cheese, but at least I’d salvaged dessert.

And in the great scheme of things, it wasn’t a big deal. The cookout wasn’t a failure because I’d messed up the mac and cheese, and people still ate the brownies.

I think that giving ourselves a little grace when we make a mistake is important.

And I can’t let the voice in my head be as negative as it has been in the past. I read a quote not too long ago that said something like “You will never speak to anyone more than you do yourself in your own head, so be kind.”

Isn’t that true? We talk a lot these days about the importance of being kind to each other. But being kind to yourself is also important! We’re all made in God’s own image. That alone should give us reason to consider how we treat others–but maybe we should also remember to speak kindly to ourselves as well.

So the next time I catch myself allowing that little voice in my head to spew negativity, I’m going to squash it.

I hope you’ll do the same!

How about you? Do you struggle sometimes with cutting yourself some slack?