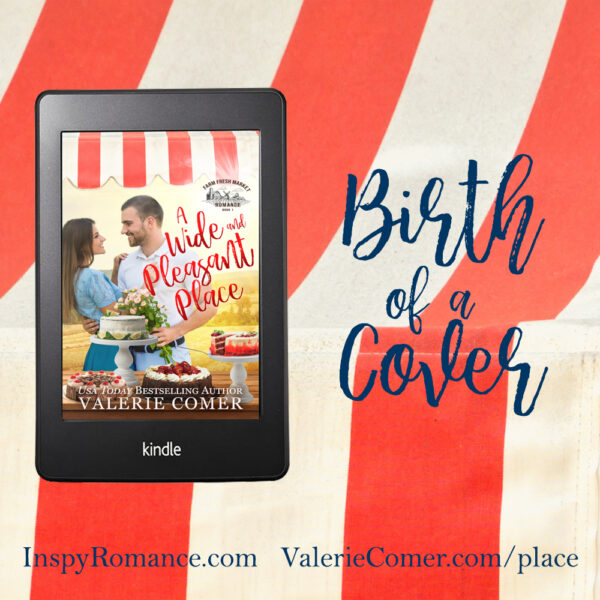 Covers are hard, y’all. I say that sincerely, even though I am not the least bit Southern.

Last fall I began work on a new series. That presents a wide open slate for a new design for covers. After all, I want to be sure readers will be able to see at a glance which books go together.

My daughter illustrated my two previous Farm Fresh Romance series — the originals in 2014-16 and the Urban FFRs, which wrapped up last fall. She’s onto other projects — illustrating maps for authors as well as writing her own YA fairy-tale retellings. She was happy to finish up the UFFR series, but wasn’t so keen on doing more covers.

Christian historical author Lynnette Bonner has created all my cowboy covers, so I asked her how she’d approach covering a series that was CCR + small town + farmers market. And it had to be a design that would offer enough variation for up to six titles in total.

She was up for the challenge! Usually we manage a pile of Facebook messaging over the course of a few hours before we’ve got a new cover finalized. The first in a series has previously taken us all day as we toyed with layout and style and fonts to kick off a new venture.

But this time was harder. Partly because there were so many variables. To me, it HAD to say romance… so it needed a man and a woman with some visible chemistry. It needed to say farmers market. After all, the new series name is Farm Fresh Market Romance. And it needed to convey, in some sense, the “wide and pleasant” aspect of the title. Tall order, it turned out!

We struggled to find good stock photos on our usual sites. Also, it was late October in the north — we weren’t going to any farmers markets for in-person photo shoots! Add to that, the first heroine is a baker, not a farmer, so we couldn’t just slap a bunch of vegetables on the cover to convey that aspect.

At the end of Day One, we were no closer to finalizing a cover direction than we’d been at the beginning of the day. On Day Two, Lynnette had a cover to create for someone else, but in between, she tossed a couple of more ideas at me.

I felt really, really horrible… but I simply didn’t love anything I’d seen. I was certain I’d be featured in the “worst client ever” stories between cover designers everywhere. 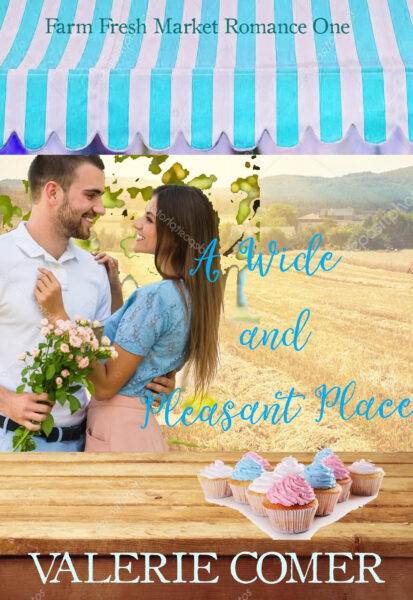 On Day Three, I had an idea. I had a hard time describing what I was seeing in my mind’s eye to Lynnette, so finally I threw together a mock-up. I sent it to Lynnette, who very diplomatically responded with something like, “Okaaaaaaay, but I’m not sure what you want me to do with that.” You can see how bad it was!

But as I began to describe the parts of it and explained why I’d chosen them, she caught and confirmed the vision. Thankfully, she is MUCH better at Photoshop than I am and was able to translate my very messy mock-up into something we could both be proud of.

A few minor tweaks later, and we were both happy. Three days, people! I hope I never put her (or another designer) through that much hassle again. Now that we have a layout, I know the second cover will be much quicker. I hope so, anyway, since we’ll be working on it in April!

A Wide and Pleasant Place will hopefully be coming to you on May 10 — I’m a little late wrapping it up, and my editor expects a very busy April in her Real Job. I’m hoping all the pieces will come together on time. 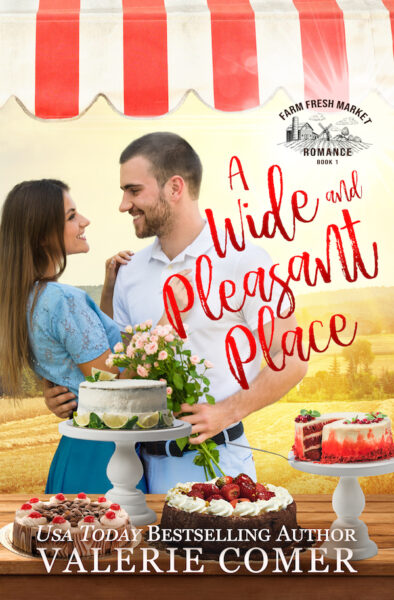 If Treyan Ackerman wants to keep seeing his daughter on weekends, he needs to stay put, keep his nose clean, and not make waves. Thankfully, he has a decent, if somewhat tedious, job in his small town’s municipal office. If the Mayor would let him tackle some of the graphics for the farmers market, it would help. But, no. Instead, she hires a vivacious city girl who turns Trey’s head. Unfortunately.

Brittany Santoro needs to redeem her reputation, rebuild her portfolio, and relocate, preferably to New York, where a top ad agency will appreciate her graphics design genius. But if she doesn’t want the whole world to know about her indiscretions, she needs to spend six months in podunk Galena Landing, furnishing artwork and ads for the town’s tourism marketing, including its farmers market. Too bad the brooding, hunky man in her office seems immune to her charms.

But when Brittany connects with Trey’s hurting daughter and sees the tender side of him, all bets are off. How can these two wounded souls be nudged into the realization that everything they want and need is right here in this wide and pleasant place?

Pre-order A Wide and Pleasant Place.

Do you judge a book by its cover? I know I do! What about a cover tells you if this is a story you might be interested in reading?