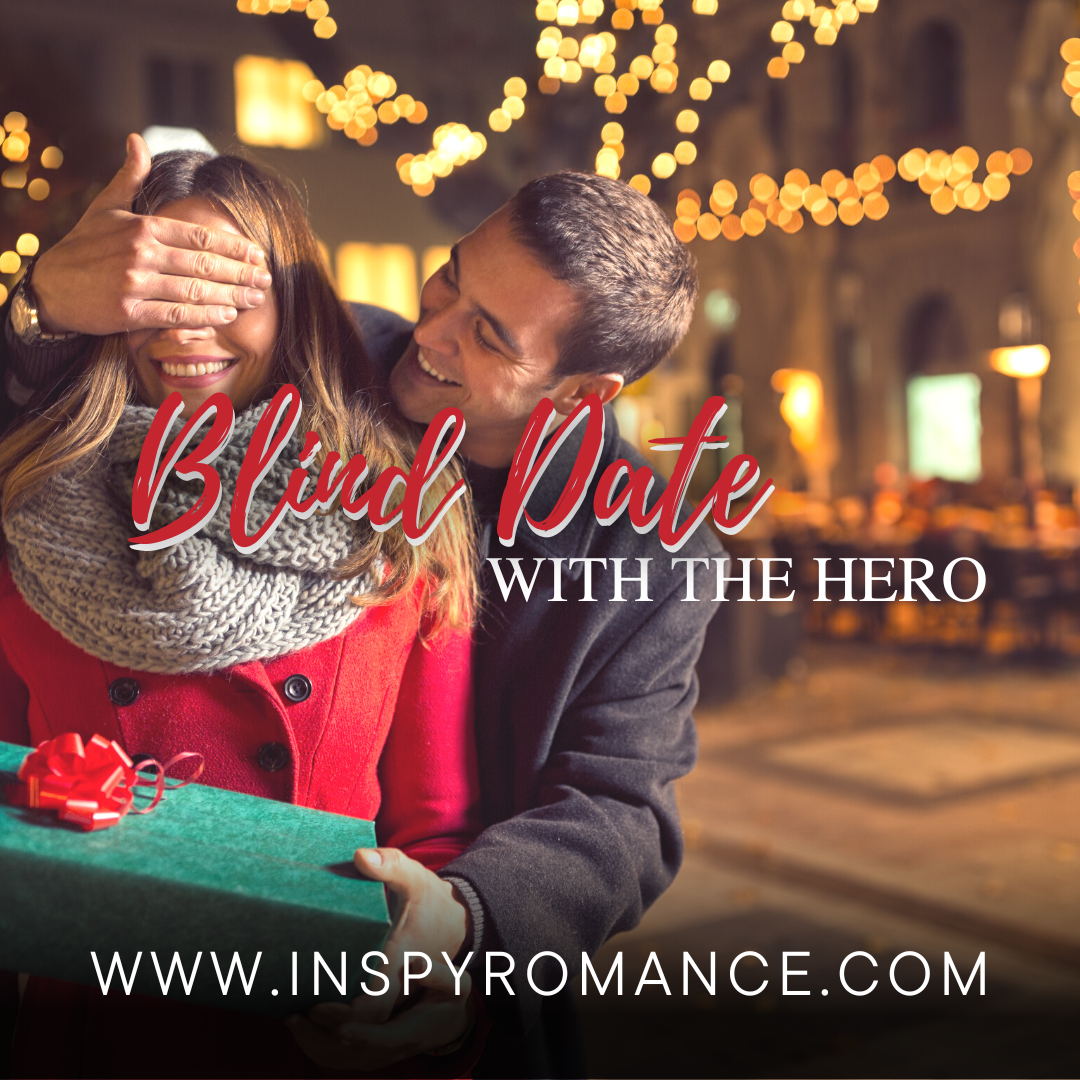 Today is release day for the final book in the Heroes of Freedom Ridge series for this Christmas season. If you missed them, we’ve already celebrated releases from Jessie Gussman, Inspy Romance’s own Liwen Ho, as well as Mandi Blake, Elle E Kay, and Hannah Jo Abbott! These six new titles bring the total of the series to 18 books!

You can catch up on the series and check out all the books here.

Last year in Freedom Ridge, I wrote a book with older main characters and a touch of suspense. That book, Believing the Hero, was even a finalist for the American Christian Fiction Writer’s prestigious Carol Award!

This year, I decided to go ALL-IN on the light-hearted, Christmas vibes that Freedom Ridge is known for.

A lost bet with blind dates as the stakes and a city-wide Secret Santa event sets the stage for best friends Jared and Alexis to find out if their friendship is really meant to be more.

Alexis’s string of blind dates is laugh-out-loud funny — and makes her appreciate her friend all the more. Here’s a little peek of one of them. It happens to take place at one of my favorite community events in Freedom — the Christmas Tree Lighting ceremony!

Children ran about, bundled in stocking caps and coats to ward off the chilly evening air.  Couples huddled together, sharing their drinks and peppermint bark from the food cart. As she watched the crowd, the choir switched songs, transitioning into a beautiful, pensive version of “God Rest Ye Merry Gentlemen.”

“I love that song,” she said absently after it was finished.

There was no response from the bench next to her and she glanced at Brad, only to find that he had fallen asleep. Alexis pressed her lips together to keep from laughing, shaking her head and burying her head in her hands.

This was really happening. Unbelievable.

Gingerly, she stood, trying not to wake his sleeping form.  Across the sidewalk, she spotted Jared walking toward her. She held a finger to her lips to shush him, before he could make any extra noise. Not that the event going on around them was especially quiet right now.

Jared’s gaze slid to Brad on the bench, and an amused expression crossed his face. Trying not to laugh, she pulled on Jared’s arm, tugging him off to the side of the path, a few yards away from her date.

“What did you do? Bore him to sleep with your rant about the second amendment?”

Alexis laughed. “Hey, nobody gets bored listening to that.”

Somehow, Jared had only been here for thirty seconds, and she was already having more fun than she had had the entire thirty minutes she spent with Brad before he fell asleep.

“Apparently, Brad stayed up all night playing a video game he has played for fifteen years now.” She made her eyes wide and nodded solemnly, as though she were impressed with the accomplishment.

“Pretty much my thoughts exactly.” She rolled her eyes.

The choir shifted into a different song, the melodic chords of “Angels We Have Heard on High” floating above the crowd in a joyous refrain.

Alexis rolled her eyes. “Number two took me to Liberty Grille. He sent his steak back twice and made a scene steamrolling the manager into comping the entire date. I don’t think I can show my face at the lodge for a year.”

She had been horrified at the time, and even the memory was making her anxiety kick up a notch.

“Yikes. So I take it there will be no second date?”

Alexis snorted. “Yeah, not so much. He actually had the gall to try to kiss me good night at my car. I came this close to decking him.” She held her thumb and forefinger an inch apart.

Jared released a loud laugh. “I think I would have had to pay Mac to give me the security footage if that had happened.”

She shook her head. “It was awful. I just keep thinking, how am I going to survive seven more dates? This is torture. I’d rather go through the Crucible all over again.” Well, maybe that wasn’t entirely true. The intense final challenge of Marine recruit training had been the closest she ever came to quitting during boot camp.

“Oh come on. It’s not that bad.” Jared nudged her with his shoulder. Leave it to him to call out her dramatics.

“Just think, by next year, you’ll be able to swear off dates again forever.”

There was something in Jared’s voice that she couldn’t place, but before she could question him about it, Mayor Starling took the stage and started the festivities.

“So who’d you get for your Secret Santa assignment?” Jared whispered the question in her ear.

“I actually got Trudy, the organizer,” she answered absently, watching with amusement as children rushed to the tree with their ornaments. The older ones carefully climbed up the stairs to the platforms to put a few of them higher up.

Alexis shook her head. “Her list was pretty helpful though. I’m going to start with something from Stories and Scones. Can’t go wrong there, right?”

Jared nodded. “That’s definitely a safe bet. Maybe I should send myself some Secret Santa gifts,” he joked. “I like cookies.”

She grinned. “I don’t think it works like that. But maybe while I’m grabbing something for Trudy, I’ll pick you up some snickerdoodles.”

“I knew there was a reason I kept you around,” he said with a wink, filling her with flutters she couldn’t deny.

Why did her friend have to be so charming and handsome?

She glanced back at her blind date, still snoring on the bench and drawing the laughter of a group of teenagers across the yard.

And why couldn’t her actual dates be more like Jared?

You can keep reading today by grabbing your copy of Blind Date with the Hero.

I mentioned that one of my favorite traditions in Freedom is the Tree Lighting Ceremony — do you have a favorite tradition or event for the season? Let me know in the comments and I’ll send one winner a paperback copy of Believing the Hero (last year’s award finalist) and a Freedom Ridge candle (US only, ebook international!)