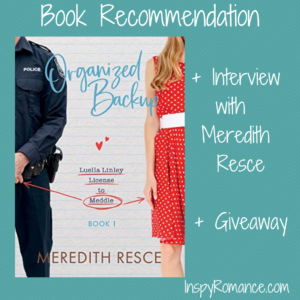 I’m delighted to welcome my Aussie author friend Meredith Resce to Inspy Romance. Meredith and I are talking about her upcoming CCR release, Organized Backup (Luella Linley: License to Meddle Book 1) and Meredith is also giving away 2 Kindle ebook copies.

Narelle: What was your inspiration for writing Organized Backup?

Meredith: Funny story. I actually wrote book #3 first about six or seven years ago. I was at a time in life when my children had all left home as young adults, and were living independently—alone. The ‘Mrs Bennet’ in me kicked in and I began to consider possible partners and make suggestions, drop hints, make mental plans. I’m an author, and my imagination came up with all sorts of varied possibilities. However, my children were unimpressed. I learned quickly that my program to get them married and settled was not appreciated. It was almost as an internal reaction to this ‘cease and desist’ order that I turned my imagination to a couple of fictional characters, Pete and Carrie, and created the enigmatic Luella Linley (Regency author and mother), who is Mrs Bennet incarnate, struggling to do her best work in the 21st Century.

When my good friend and editor read this first novel, she liked it, but felt the story of Pete’s sisters had to be told first, to set Luella Linley up as a serial meddler. So Organized Backup is the story of Megan. Luella’s daughter. I probably should take this opportunity to add a disclaimer: meddling in the lives of adult children is not recommended. Do not try this trick at home.

Narelle: Please tell us about the Australian setting for the story.

Meredith: When I first started out, I made the setting generic, as I hope to engage new readers from outside Australia. When I came to look at the language and spelling, I had to make the hard decision to give up Australian spelling, and use US spelling, but decided to maintain the Aussie flavour (flavor). So I decided to set the story in Adelaide, capital city of South Australia. This is not an outback story or a bush adventure, so you won’t read about kangaroos, koalas or platypus, and I don’t use the typical stereotype Aussie language (Crocodile Dundee style). No, ‘g’day mate’. I have included a glossary of terms for readers outside Australia who might not understand what a Tim Tam is, or a tradie, or an ambo. I’ve included references to Aussie sport—particularly AFL, the only football that is really entertaining.

Narelle: Do you have a favourite character in the story?

Meredith: Without a doubt, Luella is my favourite character. She is Mrs Bennet (Pride and Prejudice) and Lady Grantham (Downton Abbey) rolled into one, stuck in the 21st Century, taking charge in situations where a mother’s help is not always needed, or appreciated.

Narelle: Did you have any specific issues to research for the story?

Meredith: I needed to interview one of my friends who is a police officer, and have him talk me through all the intricacies of South Australian law with regard to sexual harassment in the work place and stalking. I hope this particular plot line will help some readers gain courage to take charge in situations where inappropriate behaviour is causing them stress.

Narelle: Please share with us your plans for future stories in the Luella Linley series.

Meredith: As I intimated earlier, this is the first in a series of three stories in the Luella Linely: License to Meddle series. I have already got books 2 and 3 written, and have started the review and editing process. I hope to have both of these ready for release next year.

Can she hit the target twice in a row. One daughter safely married; one daughter available; one rich, handsome and single lawyer who must be in need of a wife. But Chloe is fiercely independent and not a fan of her mother’s meddling. Will she take the bait?

Covert matchmaking will not work on her broken-hearted son. But he’s too good a catch to leave in grief after being jilted. Luella writes about arranged marriages all the time—they start out stiff and cordial but always end in love. But Pete is a real-life person. Is it likely there would be a suitable and single woman who’d agree to such an archaic practise? The only way to find out: place an ad. 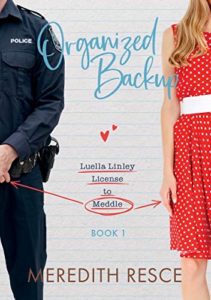 Regency romance author, Luella Linley, arranges her characters’ lives, making sure that they weather all storms and live happily-ever-after. Her characters are putty in her hands, but her 21st Century adult children are not so easily organized. When her daughter, Megan, asks for support with an inappropriate situation at work, Luella decides Megan should get a boyfriend to intimidate her boss. The cop who just pulled Luella over for speeding is a likely candidate.

Cam Fletcher is expecting to be interviewed by a famous author. Instead of sharing insights into his job working in the police force, he is sharing a meal with the famous author and her daughter, Megan. When left alone with Megan, Cam wonders when the interview will begin. The parents’ extended absence gives him a clue, which Megan confirms. Luella Linley is playing matchmaker, but is he willing to play the game?

Regency romance author Luella Linley has the best of intentions…and can’t understand why her children don’t appreciate her talent for matchmaking. A fake engagement, a daughter in trouble, and a handsome policeman playing the hero—what could possibly go wrong? This funny and charming romantic comedy from Meredith Resce that also touches on the more serious issues of faith and workplace relations will put a smile on your face and give you food for thought. Highly recommended.

Thank you, Meredith, for visiting with us. Meredith is kindly offering a giveaway of two Kindle copies of Organized Backup. To enter the giveaway, please leave a comment on this post. The giveaway will close on Thursday and the winners announced in the Sunday Edition.

Questions for you: Have you visited Australia? If yes, where did you visit? If you’ve never been to Australia, what sorts of things do you imagine that identify something as Australian? Other than Narelle Atkins, have you read any books by Australian Christian fiction authors?