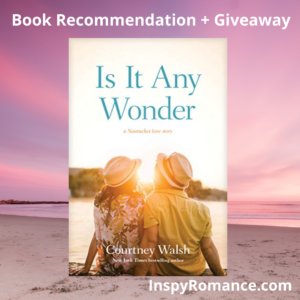 Narelle here. Today I’m sharing my book recommendation for Courtney Walsh’s upcoming release – Is It Any Wonder (A Nantucket Love Story). We’re also giving away a paperback copy to a reader who comments on this post (US mailing addresses only).

Courtney Walsh will be our guest at StoryChats @InspyRomance for Episode 16 which will go live on the podcast and YouTube on April 9. 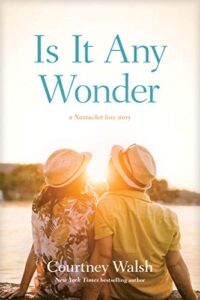 Can a promise made as kids bring them back together as adults? In this Nantucket-set beach read, “master of the genre” (Midwest Book Review) Courtney Walsh delivers a sparkling inspirational romance about first love and second chances.

Twelve years ago, Cody Boggs and Louisa Chambers made a pact that no matter where their lives took them, they’d return to Nantucket Island’s Brant Point Lighthouse on July 30, their shared golden birthday, and continue their tradition of exchanging birthday wishes. But that was before a tragic accident upended both of their lives, irrevocably pulling them apart.

Their worlds collide just months before that particular day when Louisa’s fledgling event planning company is hired by the local Coast Guard station, where she discovers Cody has recently returned to the island as the second in command. As they plan a regatta fundraiser, hoping to promote positive PR in the community, neither can deny the fireworks each encounter ignites. But working together also brings up memories of the day Cody’s father died, revealing secrets that have Cody and Louisa questioning everything they thought they knew and felt about their families and each other. 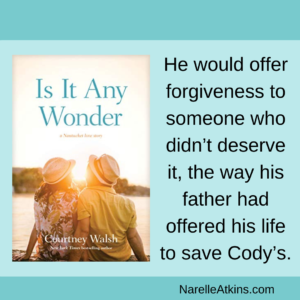 I enjoyed reading Is It Any Wonder, the second book by Courtney Walsh that’s set during summer on the charming island of Nantucket, Massachusetts. In a similar vein to the first Nantucket book, If For Any Reason, the story is a second chances romance that reunites childhood friends who are separated by tragedy and family secrets.

Louisa’s parents and Cody’s parents were best friends who vacationed together in Nantucket every summer until the year Cody and Louisa turned eighteen. They grew up spending their shared July 30 birthday together and never dreamed their lives would split in different directions. The teens, who shared their first kiss on their sixteenth birthday, made a pact to meet up in Nantucket to celebrate their shared thirtieth golden birthday. The summer Cody’s father passed away ended the Nantucket tradition and shattered the close relationship between the two families.

Louisa is an only child who struggles with her strained and distant relationship with her parents. She is a dreamer with big ideas and she’s now living in Nantucket, building her concierge business, and determined to prove the naysayers wrong. She’s still haunted by memories of Cody and the summer his dad died. Louisa has never forgiven herself for the role she played in Cody’s father’s death.

Cody’s moving up the ranks in the Coast Guard and has been transferred to Nantucket, the one place he doesn’t want to live. He carries a load of guilt from the loss of his dad and the life changing implications on him, his mom, and his sister. Cody wrestles with his fear of the ocean and he is stunned, on his first day on the job in Nantucket, to discover the woman he dives in and rescues is his first love, Louisa.

Cody and Louisa are both weighed down by a ton of emotional baggage and unanswered questions about what really happened during that summer twelve years ago when they lost Cody’s dad. Their friendship is slow to defrost, and being thrown together through their work adds more complications and questions from the past that fuels their simmering mutual attraction.

Maggie, an old family friend in Nantucket who’s like a mother to Louisa, is a delightful character who is the catalyst to bringing about the hope for reconciliation. I loved experiencing the beach setting and the relaxing pace of life on the idyllic island with the characters. Louisa zipped around the island on her Vespa and introduced me to lobster rolls (yum!) and coconut milk lattes with stevia – a combination I’m not planning to try, lol. Each to their own.

Cody and Louisa are challenged to pull down their emotional barriers, seek forgiveness, and discover if true love can conquer all the obstacles and secrets from their shared history. I enjoyed journeying with the characters on their long and winding path to forgiveness and new beginnings. I recommend Is It Any Wonder to contemporary romance readers who like fun beach romance reads with a subtle faith element and themes of forgiveness and second chances.

I received an advanced reader copy from the publisher.

We’re giving away a print book copy of Is It Any Wonder to a reader with a USA mailing address who comments on this post. The giveaway will close on Monday, April 12, and the winner announced in the Sunday Edition.

Questions for you: Do you have a favorite Courtney Walsh book? Have you visited Nantucket or read any books set in Nantucket? Do you read more books during the summer ‘beach read’ season or during winter? I’d love to hear your thoughts.