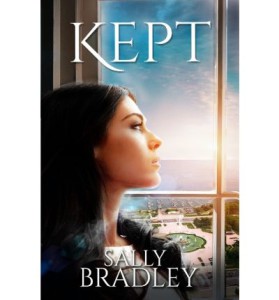 I bumped ‘Kept’ up to the top of my ‘to be read’ pile after my Aussie and NZ writer friends raved about the book on the Australasian Christian Writers blog. You can read Ian Acheson’s review of ‘Kept’ here. My dear friend Andrea Grigg, who knows my reading tastes, assured me that I’d love ‘Kept’. She was dead right (thanks, Andrea!). If I had to describe this book in only one word, I would choose brilliant. I read the book in less than a day because I just couldn’t put it down.

What was it about ‘Kept’, by Inspy Romance author Sally Bradley, that grabbed my attention and wouldn’t let me go? It was different to the typical Christian romance. I will confess that I didn’t particularly like Miska, the heroine and main character, for a large part of the story. It’s unusual for me to enjoy a romance when I’m not fully engaged with the heroine and comfortable spending time in her head.

Miska was real and flawed and her life was very messy. When Dillan and Garrett move into the apartment next door and Garrett’s fiance, Tracy, befriends Miska, she interacts with Christians for the first time. Miska’s dysfunctional family and upbringing contributed to her making a series of decisions that would have big and hard consequences down the track. Miska was closest to her half sister, Adrienne. Their father’s reappearance created additional problems in Miska’s already complex relationship with Adrienne.

Dillan was an assistant pastor who struggled with his strong physical attraction to his wild child neighbor. Miska was initially very scathing of all things Christian. I loved Dillan’s strength of character and his integrity when confronted with temptation and Miska’s lifestyle choices that were so very different to his own.

I really liked the realism in the story. The character’s motivations and actions weren’t sugar coated and the minor characters added significant value to the story. Tracy was a fascinating character and her unconditional love and acceptance of Miska was a highlight in the story. The faith element in ‘Kept’ was more overt than in many Christian romances, but it worked and the story didn’t feel preachy.

In many ways ‘Kept’ was all about sex. Miska believed she was in love with Mark, a married professional baseball player who gifted her with large amounts of money when he was in town and warming her bed. Miska was a romance editor who worked from home and lived in a luxurious Chicago apartment with a mortgage she couldn’t afford on her salary alone. There was sexual tension in the story and off-stage bedroom scenes that were tastefully handled. The duplicitous and hedonistic behavior of a few of the characters in the story was well done and a reflection of our society.

I highly recommend ‘Kept’ to mature readers who are looking for a cutting edge contemporary Christian romance that tackles real to life issues.