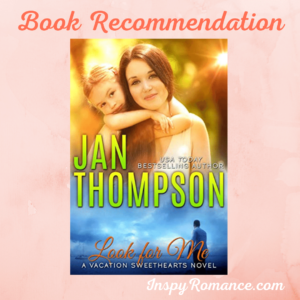 Today I’m sharing my book recommendation for Look for Me by Inspy Romance author Jan Thompson, Book 4 in her Vacation Sweethearts series set in Key Largo, Florida. I jumped into the series at Book 4 and read the book as a standalone. But, as I was reading, some of the series story details seemed familiar. I do think I have read some of the earlier books in the series, which includes the back story for Martin and Corinne. 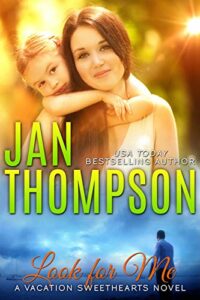 She needs a champion. Just not him.

Four years after his girlfriend ghosted him, Martin MacFarland finds her in Key Largo, abused and pregnant with her second child. Martin wants to be there for her, but she can’t give him a second chance.

Remember the MacFarlands in Smile for Me (Vacation Sweethearts Book 1)? Look for Me is the story of Tina’s brother, Martin. This Christian beach town romance novel with a side of suspense has clean language while dealing with the difficulties of past sins, single motherhood, second chances, redemption, and the mercy of God. It is Book 4 in USA Today bestselling author Jan Thompson’s Vacation Sweethearts series of Christian travel romance novels, a spin-off of her Savannah Sweethearts beach romance series.

She needs a champion…

A single mother on the run, Corinne Anderson has made many mistakes since she broke up with Martin MacFarland four years ago. Each mistake compounds on the other problems in her life.

Down and out, Corinne and her three-year-old daughter end up in the small beach town of Key Largo, hiding from the criminals looking for them. Their witness protection cover blown, Corinne needs all the help she can get.

As long as it’s not from Martin.

After his father gives him half the ownership of the MacMuscles Classic Car Restoration business in Savannah, Georgia, Martin MacFarland is convinced that he is ready to settle down and start a family. Unfortunately for him, the only woman he ever loved has vanished without a trace.

After his private investigator tracks her down, Martin drives to Key Largo, praying that Corinne will forgive him for what he did before he became a Christian, and hoping she might consider starting over with him.

Well, she can’t. And she won’t tell him why either.

Yet he won’t leave…

As Martin gets closer to finding out what Corinne is up to or hiding from, will he fall into the same fire that has burned Corinne so many times? Will his love survive the flames? 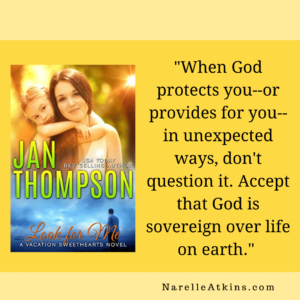 I enjoyed reading Look for Me by Jan Thompson. I like second chances romances, and I loved how the story premise was seeded in Martin and Corinne’s relationship history in Savannah, Georgia.

Four years earlier, Martin became a Christian while he was dating Corinne. His new faith dictated that he couldn’t continue his current romantic relationship with Corinne, and the obvious solution was to get married. Corinne didn’t understand why Martin’s new religious beliefs had to change or impact their relationship. She loved Martin, but she didn’t want to get married. Corinne perceived his marriage ultimatum as a rejection, which led to her ghosting Martin and running into a whole new world of trouble.

Fast forward four years, and Corinne’s life is a train wreck. A series of foolish decisions resulted in her hiding out in Key Largo, Florida. She’s now a pregnant single mother with a three year old, and in a witness protection program.

Martin has not forgotten Corinne, and he hires a private investigator who discovers Corinne is working in a Key Largo chocolate shop using a different name. The story opens with Martin visiting Key Largo and wanting to reconnect with Corinne. His presence in Key Largo places Corinne’s life in more danger.

I enjoyed the suspense element in the story, and how the characters relied on their faith to survive and endure many challenging situations. Corinne became a Christian a year earlier in Key Largo, and she has accepted that she has to live with the consequences of her past decisions. I wanted to see Corinne and Martin reunite and have a second chance with Jesus at the center of their relationship. I recommend Look for Me to contemporary romance readers who like a suspense thread plus a strong and overt faith element in the story.

Learn more about Jan Thompson and her books at her website.

Questions For You: Do you ever read series books out of order? Have you read many CCR books set in Florida? I’d love to hear your thoughts.