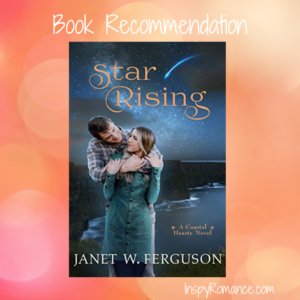 Narelle here. Today I’m sharing with you my book recommendation for Star Rising (A Coastal Hearts Novel) by Inspy Romance author Janet W. Ferguson. In Australia our international border remains closed. The next best way to travel, imho, is via a great CCR book. Join me in journeying with Star and Paul on a fabulous tour of Ireland!

Star Youngblood has always been a fighter–a necessity after her mother married a monster of a man. Now, she’s finally on the path to the stable life she’s always wanted. Her employer, Priscilla Kelly, is a sweet woman ravaged by rheumatoid arthritis, and Star will do anything to help her. Even if that means going toe to toe with Mrs. Kelly’s neglectful son.

After being betrayed on the mission field and devastated by the tragic death of his father, Paul Kelly gave up on God. He lives life on his own terms, biding his time as a corporate pilot until he can save enough money to begin his own flight school closer to home. His mother is all he has left, and he wants to be near her. He just didn’t expect her health to decline so quickly. When he discovers his mother has taken in a stray—a woman he’s not at all sure can be trusted—his protective instincts kick into high gear. Paul’s handled a lot of turbulence, but he’s never gone up against a force like Star.

As Paul and Star strive to protect his mother in their own ways, they soon find their own hearts are at the greatest risk. 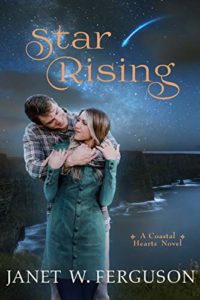 I enjoyed reading Star Rising and touring Ireland with the characters. Star is a survivor who has overcome the odds to get her life together. She’s a new Christian and believes her sobriety is anchored in her faith. Priscilla has been a lifeline for Star and has provided her with a much needed job. Star appreciates Priscilla and the people at the Re-Claimed ministry in St. Simons, Georgia, USA, who have helped her reclaim her life.

Priscilla’s son, Paul, is a corporate pilot based in Europe who works hard and plays hard. He kissed goodbye his faith and his youthful missionary dreams in Africa after being burned by hypocritical Christians. Paul lives for himself, hates his self absorbed and arrogant boss, and is saving money in order to return to the States and take care of his elderly mother.

Priscilla has health issues and has always dreamed of traveling to Ireland. With time against her, she makes a last minute booking to join a tour group in Ireland with Star as her companion and carer. Star and Paul do not get along at all when they first meet. I can understand why Star doesn’t have a high opinion of Paul and, like Star, it took me awhile to warm to his character. The journey to Ireland is hilarious because everything goes wrong. It’s those moments of stress where the polite social masks are removed that reveal a person’s true character.

Star and Priscilla are praying for Paul and his unbelief. The story has a strong faith element that is seamlessly woven in because the characters each have their own struggles in their faith journeys. Star and Paul are drawn to each other, a strong attraction simmers, and a holiday romance unfolds despite Star, in particular, having a list of reasons for why a long term relationship is an impossible dream.

Life is messy and the temptation to choose worldly pleasure over God’s best is not sugar-coated or downplayed in the story. I couldn’t put the book down because I had to know what happens next. I wanted to ride the rollercoaster of emotions with Star and Paul and discover how they’d achieve their happily-ever-after. Highly recommended for readers who are looking for a story that deals with heavier topics in a realistic manner with lighthearted moments.

Questions for you: Have you read Star Rising? Have you visited Ireland? Do you enjoy travelling abroad and exploring foreign settings via a good book? I’d love to hear your thoughts.