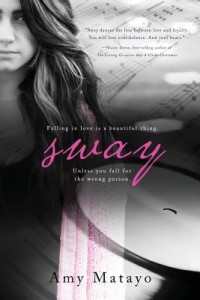 Falling in love is a beautiful thing. Unless you fall for the wrong person.

Finally settled after a tragedy-laden life, 24-year-old Caleb has found security in his faith, his friends, and his career. It’s the life he’s always wanted—simple, predictable, and safe. Enter Kate Hawkins, the attractive 21-year-old stranger he rescues from a bar fight who has an odd affinity for the color pink and a unique sense of humor.

It doesn’t take long to realize their connection is intense, but after only a handful of dates, a shocking revelation surfaces. Lines are drawn, sides are taken, and loyalties are decided as their newfound relationship is brought to a sudden halt.

But unlike most couples who split, avoiding each other is impossible. As daily interactions become unbearable, one realization becomes clear: they’ve both fallen hard for the absolute wrong person, which leaves both scrambling for a way to make it right.

I enjoyed Sway, and I read it very quickly once I was a few chapters into the story. My Aussie friends recommended the book to me, and I’m glad they did because I may not have read the whole book without their recommendation. When I’m browsing books, I usually read part or all of the sample. My thoughts on the opening pages determine if I’ll keep reading. Sway is written in first person and opens in a seedy bar in Oklahoma City. Initially I felt like I was reading a new adult romance story about a group of young people with questionable morals who were looking to hook up. That’s not my usual choice of reading material, and I would have missed out on a great story had I tossed it aside and not continued reading.

Caleb is a fascinating character who has overcome enormous obstacles to reach a place where he’s content with his life and has a purpose. The first person viewpoint means we are inside his head, and we receive a largely unfiltered male point of view that is mild in language compared to many general market romances, but more overt and descriptive than the typical Christian romance. Conservative readers who prefer very sweet romances may not be comfortable with this aspect of the story.

Kate is a naive and sheltered twenty-one year old who is dragged out to a bar by her friends to celebrate her twenty-first birthday. I thought this aspect of the story was odd until I remembered the legal age for drinking and going to bars is twenty-one (it’s eighteen in Australia). Kate’s so-called friends abandon her in pursuit of one night stands, and Kate finds trouble very fast.

Caleb’s reasons for being in the bar are made clear later in the story. He’s attracted to Kate from the moment she walks into the bar, and he can’t keep his eyes off her. Before long he recognises that Kate’s in trouble, and he rescues her. This is the start of their relationship, although all is not as it seems.  One third of the way into the story we learn more about Kate and Caleb’s very different backgrounds, and the secrets that are revealed blow apart their preconceived ideas about each other and their developing romantic relationship.

The plotting and character development in the story is brilliant. We see both Kate and Caleb challenged by the events in the story and forced to face their greatest fears. Can their new love survive what looks like insurmountable obstacles in their path? This is the story question that stayed with me until the very end, and I found the ending both delightful and satisfying.

I was also challenged to think more about the big issue raised in the story. We haven’t seen as much controversy around this issue in Australia, and it was insightful to gain a broader understanding of American culture in this specific context. I recommend Sway to readers who enjoy realistic and edgy Christian romances that deal with contemporary issues.

Learn more about Amy Matayo and her books at her website.