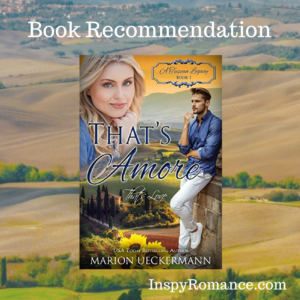 Back in 2017 a group of contemporary Christian romance authors started working on a group project with a difference.  ‘A Tuscan Legacy’ was created by Marion Ueckermann and Autumn Macarthur. I was delighted to have the opportunity to join them and Elizabeth Maddrey, Alexa Verde, Heather Gray and Clare Revell on their writing journey with the Rossi family. A truly international series based in Tuscany with romance stories set in Europe, USA, UK, and Australia. The series released in the Spring of 2018 and kicks off with ‘That’s Amore’. (It’s now available as a complete series in a box set, with a bonus 10th novella.) 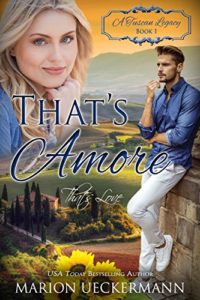 Begin your journey to Tuscany with Book 1 of A Tuscan Legacy! Each novella is a complete and satisfying romance, filled with faith, family, forgiveness and love.

When Rafaele and Jayne meet again two years after dancing the night away together in Tuscany, is it a matter of fate or of faith?

After deciding to take a six-month sabbatical, Italian lawyer Rafaele Rossi moves from Florence back to Villa Rossi in the middle of Tuscany, resigned to managing the family farm for his aging nonna after his father’s passing. Convinced a family get-together is what Nonna needs to lift her spirits, he plans an eightieth birthday party for her, making sure his siblings and cousins attend.

The Keswick jewelry store where Jayne Austin has worked for seven years closes its doors. Jayne takes her generous severance pay and heads off to Italy–Tuscany to be precise. Choosing to leave her fate in God’s hands, she prays she’ll miraculously bump into the handsome best man she’d danced the night away with at a friend’s Tuscan wedding two years ago. She hasn’t been able to forget those smoldering brown eyes and that rich Italian accent.

Jayne’s prayers are answered swiftly and in the most unexpected way. Before she knows what’s happening, she’s a guest not only at Isabella Rossi’s birthday party, but at Villa Rossi too.

When Rafaele receives what appears to be a valuable painting from an unknown benefactor, he’s reminded that he doesn’t want to lose Jayne again. After what he’s done to drive her from the villa, though, what kind of a commitment will it take for her to stay?

Firstly, let me say how much I enjoyed writing Sienna’s story (Solo Tu, Book 7) for A Tuscan Legacy.

That’s Amore is a short novel length book that features Rafaele and Jayne’s romance, and introduces the series mystery plot that unfolds in the shorter novellas.

For the other novellas in the series, the song titles may not play a role in the actual story.

All nine books include a fully developed contemporary Christian romance. The series spans three continents and has a strong international flavour.

Cultural differences are explored in the stories. More conservative readers may be concerned to see Rafaele and Nonna drinking vino (wine) at dinner as part of their normal life in That’s Amore.

Villa Rossi is a typical Tuscan Estate that includes a vineyard. Drinking a glass of vino at dinner in Tuscany is a normal part of their culture – in the same way that abstaining from alcohol is normal for some Christians in other cultures. It would have been culturally inaccurate to not include vino in That’s Amore.

I loved reading That’s Amore and seeing my girl, Sienna, with her family in Tuscany for Nonna’s 80th Birthday Party.

Rafaele Rossi is a lawyer who returns to Villa Rossi to help his Nonna. His father passed away three months earlier and, as the eldest son, it’s his family duty to take care of the family estate. A family duty he’d avoided due to his complicated relationship with his late father.

Jayne Austin remembers the one night she spent dancing with Rafaele at a friend’s Tuscan wedding two years earlier. The English jewellery store where she works closes down, and Jayne decides to go on vacation in Tuscany. She prays that God will lead her back to Rafaele.

Rafaele and Jayne’s romance is fun and fast – they fall in love quickly! The challenges of life and the different worlds they live in throw many obstacles in their path. A beautiful summer romance in a gorgeous location – highly recommended. Start your journey to Tuscany with That’s Amore.

Have you read ‘A Tuscan Legacy’? Do you enjoy reading fiction books where you can learn about different cultures in the story? I’d love to hear your thoughts.