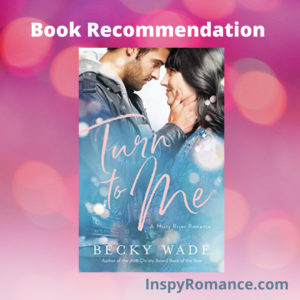 His promise will cost him far more than he imagined.

Guilt has defined Luke Dempsey’s life, but it was self-destructiveness that landed him in prison. When his friend and fellow inmate lay dying shortly before Luke’s release, the older man revealed he left a string of clues for his daughter, Finley, that will lead her to the treasure he’s hidden. Worried that she won’t be the only one pursuing the treasure, he gains Luke’s promise to protect her until the end of her search.

Spunky and idealistic, Finley Sutherland is the owner of an animal rescue center and a defender of lost causes. She accepts Luke’s help on the treasure hunt while secretly planning to help him in return–by coaxing him to embrace the forgiveness he’s long denied himself.

As they draw closer to the final clue, their reasons for resisting each other begin to crumble, and Luke realizes his promise will push him to the limit in more ways than one. He’ll do his best to shield Finley from unseen threats, but who’s going to shield him from losing his heart? 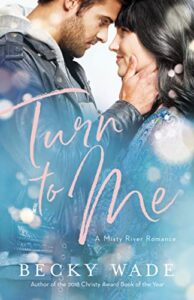 I enjoyed reading Turn to Me, book 3 in Becky Wade’s Misty River Romance series set in Georgia, despite my initial reservations. When I start reading a contemporary Christian romance (CCR), I’ll usually connect with and like one or both of the main characters. I’m in their head, seeing and experiencing the story world through their eyes.

I was intrigued by the story premise of Turn to Me and the mystery of the treasure hunt, but I didn’t initially warm to Finley or Luke. They both brought a great deal of sadness, angst, and emotional baggage from their complex pasts and family situations to the story. It took time to unpack their complicated history and backgrounds. As I read on and gained a greater understanding of their life circumstances and choices, I could empathise with their situation and cheer for them in the story.

Luke was recently released from prison after serving seven years for felony theft. Finley’s father passed away while he was serving a sentence for involuntary manslaughter. He was friends with Luke in prison and trusted Luke. Her father’s dying wish was for Luke to keep Finley safe while she undertook her birthday treasure hunt that her father had set up before he was incarcerated.

Finley is an animal loving, flower child vegan who runs the Furry Tails animal shelter in Misty River for abandoned dogs that need new forever homes. The puppies in the story are adorable. She’s a Christian who lost her beloved fiance in a car wreck five years ago, and she believes God’s plan for her is to stay single and care for her animals.

When Luke arrives in Finley’s life, and she learns he’s the reclusive one from the Miracle Five who survived the earthquake in El Salvador almost twenty years ago, she views him as a project to fix and bring back to faith. Finley provides Luke with a job at the animal shelter, and they work together to solve the treasure hunt clues. 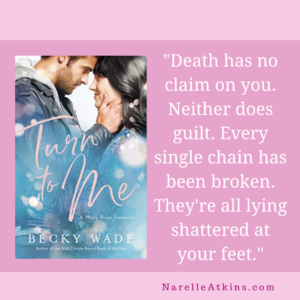 Luke and Finley share an undeniable attraction, despite their many differences. Luke wants to finish the treasure hunt as soon as possible and leave behind his home town of Misty River. He’s wrestling with guilt from his life choices, and believes he’s not worthy of Finley. When circumstances in the story put them in danger, they’re forced to reconsider their future plans and feelings for each other.

I liked the fun romantic subplot featuring Ben, from the Miracle Five, and Akira, who works with Finley at Furry Tails. I recommend Turn to Me to contemporary romance readers who like romances with swoony kisses that address challenging topics and include strong faith and mystery elements woven into the story.

Many thanks to NetGalley and Bethany House for the advanced reader copy.

Learn more about Becky Wade and her books at her website.

Questions for you: Have you read any CCR books with main characters who have spent time in prison? Do you like CCR books that include a mystery element in the story? I’d love to hear your thoughts.