One of the main things we do here on InspyRomance is promote Contemporary Christian Romance. One way to do that is, of course, to review books we’ve read. And today is one of those days.

In a week where my timeline was filled with pics from Canada where Prince William and Catherine, Duchess of Cambridge, were visiting with their children, a romance set in a palace seems fitting!

Ginger is a dear friend of mine and my fantastic proofreader to boot. Usually, I get to read her stories before release, but the time to read this one came right as I had my eye surgery and so I didn’t have the chance.

As always, Ginger is a fantastic storyteller. She takes the characters we’ve come to know and love in One Choice and Second Choice and spins a wonderful new story.

Matthias is still the serious, over-protective head of security. He’s tasked with the safety of the royal family and all of those living and working under the palace roof.

Like Aileen. When her boss married Princess Anaya, she moved to the palace and began working in the kitchen. Despite innate talent, she finds herself on the outs with most of the kitchen staff.

When the two finally meet, sparks begin to fly both between them and when the part of the palace is burned. Together, they try to come to terms with what’s happened, with a madman on the loose, and the search for a spy and a traitor.

The answers will come, but it will test their faith – in God, in each other, and in their own judgment.

Ginger also deals with things like depression, loss of a parent, and feelings of being truly alone in this world. And she deals with them well.

As with most books we read, there are a couple things I would have liked to see or change, but they were minor at worst.

The biggest thing wrong with Love’s Choice? It was too short ;). But aren’t most good books?

This book brings the Belikarian Weddings series to a close, but I can’t wait to see what else Ginger has to offer. And I really hope there’s another country or two in her universe that has some royal family members in need of a little romance ;).

Have you read any of Ginger’s books? Today I’m giving away a one copy of the winner’s choice of books from the Belikarian Weddings series! Be sure to comment and let me know which book you’d like! 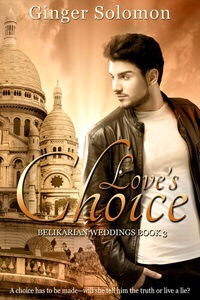 Aileen Najjar joins the royal household when her boss marries the princess. She loves working in the kitchen, but when the head cook allows her to prepare most of the meals, trouble finds her. The handsome head of security turns out to be her ally as she struggles to fit in.

Matthias Firat wants to find the mole who leaked information leading to the attempts on the princess’s life. His attraction to the new kitchen helper prompts him to ask for her help.

When she discovers the truth, it might very well break both their hearts.