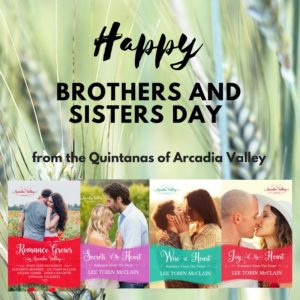 Happy Brothers and Sisters day! Where would we be without our siblings, the people who’ve been there from childhood on, who know the good and the bad about us, who are there to lean on in times of trouble and celebrate with in times of joy?

At least, that’s the ideal! Sometimes siblings don’t get along at all. And some of us weren’t blessed with siblings. People in these situations often find friends who become like family. And of course, we’re all brothers and sisters in Christ; in many cases, our adopted church families are the closest of all.

I love writing about brothers and sisters, and my Arcadia Valley Romance miniseries features a strong family: Javier, Alex, Daniel, and Veronica Quintana. They drive each other crazy as they work to make their family restaurant successful and try to  find their own happy endings as well.

Veronica, the heroine of the latest book, sometimes suffers from the over involvement of her three older brothers. Here’s a typical evening at El Corazon, where Veronica is working as a hostess:

Veronica’s oldest brother, Javier, strode out of the kitchen and toward the hostess stand. “Heard you got home late last night,” he said as he picked up the clipboard to see which tables were still available. “Where were you?” His eyes scanned the restaurant, checking everything out, making sure there wasn’t a napkin or fork out of place.

“Yeah, where were you?” her brother Alex called from the other side of the dining room. He wore a white apron and was bussing a table, subbing for an employee who’d called in sick.

She glared at Alex. He was just a couple of years older than she was and should know better than to stick his nose into her business. He was supposed to be on her side against their oldest brother’s overprotectiveness.

“It’s okay.” Her middle brother, Daniel, spoke up from the table where he sat with his twins and his new wife, Tabitha. “She was at Karaoke night at the American Legion. One of my patients mentioned it.” He tilted his head to one side as he looked at Veronica. “Did you really sing ‘All My Exes Live In Texas?’ Twice?”

“I love that song,” one of the few remaining customers said, and started to whistle it.

Veronica let her head sink into her hands.

Any guesses on her brothers’ reactions when Veronica gets into a relationship with an older man who happens to be her boss?

Do you have overprotective siblings? Are you one yourself? Do your children or grandchildren protect and care for each other… or do they tend to drive each other crazy? Comment for a chance to win one of the Quintana siblings’ books.