Sometimes characters surprise me. Sometimes, it’s what they do. But every once in a while, the character who shows up first as I begin to think up a book does surprise me.

In May, a four-year-old dream will come to life for me when A Season of Change releases, first in the series called Seasons in Pinecraft.

But I need to backtrack first. In the spring of 2010, I began researching a new series set in the Amish-Mennonite village of Pinecraft, located in sunny Sarasota, Florida.

The idea of Amish in Florida was completely novel to me at the time, so my writer’s imagination raced around with possibilities. 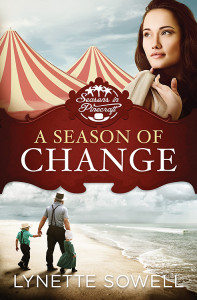 Usually, once I decide on a setting for a book, I begin to explore what’s special about the place where my story unfolds. In the case of Pinecraft, it’s a very special and unique Plain community—but that’s for another day!

After I knew I’d be writing about Pinecraft, I knew I needed characters to fill the space. So, in a way I’m not sure I can explain, Jacob Miller came to mind like my characters usually do.

The first thought he shared with me was: “I should have listened to the bishop’s words of caution. I wish I’d never come to Pinecraft. This is all my fault.”

My first thought was: Who’s Jacob Miller? And what’s all his fault?

I learned that Jacob Miller is a young Amish man, about 32 years old, and he lives in Ohio where he supports his young family by working in a cabinet shop. His children, Rebecca and Ezekiel, are the treasures of his heart, and the three of them are very close.

They’re visiting Pinecraft for a planned two-week vacation at Christmas time, and staying in his grandparents’ home, just like many Amish in Pinecraft stay with relatives when they visit for vacation and go to the beach.

(By now you’re probably thinking—Amish? Vacation? Beach? Yes, but like I said earlier about Pinecraft, that’s for another day.) 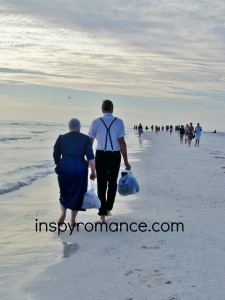 I then learned that Jacob Miller is an Amish widower.

My imagination screeched to a halt.

What? But I’m not an Amish widower. I have no frame of reference to climb inside the mind of a 32-year-old Amish man from Ohio who works in a cabinet shop. Where’s the heroine? Finding something in common with her should be much easier.

Jacob knows grief and he’s had a hard time “moving on” as his family and local church have urged him to. He’s full of questions about why things have happened in his life as they have, and is struggling with his beliefs even as he puts on a bold front to his family. Then his vacation is upended when his daughter is injured, and his two-week vacation stretches out for months—months in the land of temptation and worldliness at every turn in the city.

As I gave Jacob Miller a chance and got to know him, I realized I had more in common with him than I first thought. I too have known grief, and I too have had questions I wasn’t sure God could or would answer about past circumstances in my life. As I wrote his story, I grew to love Jacob as a character and I enjoyed seeing his journey unfold. I hope you’ll stay tuned for May and follow his journey too, in A Season Of Change.