“Am I going to be in your book?” an online date asks.

“Well… it’s complicated,” I reply, dashing his hopes of discovering himself to be a romantic hero.

Actually, people and situations in my life do appear in my books, so much so that any of my friends or acquaintances, or that young woman mysteriously knitting at the bar of a trendy café, could show up in some way in an upcoming novel. However, it’s never a one-to-one correlation between life and fiction.

Just to show you how it works for me, I want to talk about how my dog appears in my new release, The Soldier and the Single Mom.

Here’s the dog as he appears in the novel:

His heart still racing, Buck stepped out the back door of the clinic for some air…and heard a whining, scratching sound at his feet.

There was a closed cardboard box, a couple feet square, with holes punched in the sides and an envelope on the top. Uh-oh.

He picked up the box and carried it inside. “Drop-off,” he said to Troy and set the box down on the floor. He handed the envelope to Troy, then grabbed a pair of forceps and used them to open the box gingerly. No telling what he might find. Could be something wild and scared, even rabid.

But when he got the box open, a dirty white mop flung itself out and planted front paws on Buck’s leg. When he bent to pat what looked like its head, the little dog licked his hand, barking and whining.

He squatted down. “Okay, buddy. It’s okay.” He stroked the matted, dirty fur. “What’s in the envelope?” he asked Troy.

Troy squinted at a sheet of notepaper and then read aloud. “‘I’m sick, can’t take care of Spike no more. My kids want to put him down. Please help.’”

“Spike?” Buck brushed back the excessive hair on the little dog’s head and looked into anxious dark eyes. “You’re a tough guy, huh?”

A couple of bills fluttered to the floor, and Troy picked them up, a five and a single. “Six dollars.” He shook his head. “Guy probably went without something to leave that.”

“Got room for him at the rescue?”

“I’ll make room. Better check him out first.” Troy got a small biscuit out of the jar they kept on the desk and whistled, and the mop waddled over to him. “Hey, big guy. How long were you out there?”

“Sit,” Troy said, and the mop sat down and held out a polite paw. When Troy offered the biscuit, the dog grabbed it and ran off to the corner of the room to eat. “He’s hungry.” 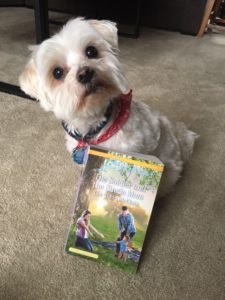 h of that scene is reality and how much did I fictionalize?

So there you have it. If you know my boy Porter, you could certainly guess that Spike is based on him. But there’s not a direct correlation; some details are changed.

Right now, I’m working on a Love Inspired novel, and I need a pet! Probably a dog. If you’ll share some details about your dog or another rescue pet here—or over on my Facebook author page, where you can also post a picture—I might pick your pet to be adopted by a single mom’s four troubled kids in a book that’s coming out in 2018. Warning: some details will probably be changed!

If you want to hear about my upcoming releases and get a free short story, be sure to sign up for my newsletter.