Readers may not know this, but writers are, for the most part, introverts. We like being alone. We re-energize when we’re in a quiet place.

Conversation, one on one, is invigorating, but in a group, it is overwhelming, so we usually sit back, watch, and listen. This is one of the reasons we are often called good listeners.

One advantage a writer has over a regular introvert is that we have an outlet. We write. Unfortunately, if we are to be published, we must also do more than just write. We have to put our work—our babies—into someone else’s hands. Sometimes they like it. Sometimes they don’t.

Many writers have shared about their one word or verse for the year. I hadn’t planned on doing either as I usually forget by the end of the year, but God (don’t you just love that phrase). Well, He had something to say to me, and I think it can apply to you as well. 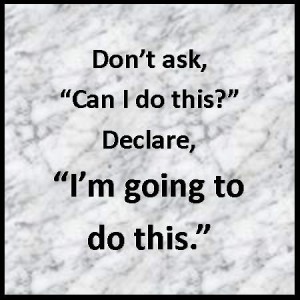 Let’s start with the verse. Hebrews 11:1, “Now faith is the substance of things hoped for, the evidence of things not seen.” The word: Confidence. I wrote about this a bit on my own blog, but I want to share here briefly as well. Confidence, according to Dictionary.com, is 1)full trust; belief in the powers, trustworthiness, or reliability of a person or thing, and 2)belief in oneself and one’s powers or abilities; self-confidence; self-reliance;assurance.

Do you see what I see?

If God is reliable, and we know He is, then we should be able to have faith and confidence in Him, but also in ourselves. That we are who He said we are. We are overcomers, the head and not the tail, above and not beneath (Rev. 12:11, Deut. 28:13, respectively).

Sometimes we lose our confidence, though, no matter whether we’re writers or have another profession (mom included—it’s the greatest profession, but comes with the least monetary reward) because someone didn’t like our work, or had some unkind things to say.

I found this quote:

Remember that a no is free. Ask for what you like, and get used to being turned down. Rejection is hard, but to get acceptance you have to put up with a lot of rejection. If you really like something, don’t ever think, Can I do this? If you think Can I?, you won’t. You have to say, “I”m gonna do this, and nobody’s gonna stop me!” But you have to believe that, you can’t just say it. It might take really a long time, because people never say you’re good at first. Or if they do, you’re a flash in the pan and it’s over. –John Waters, filmmaker

I think it says a lot. Don’t you? We have to make a decision to be confident.

So that’s my January pep talk. Next month, I hope to tell you more about what I’m working on in my writing life. Stay tuned.